In this post we will look at two great drills that can be used to improve your post defense and improve your help defense. Drill Setup: Three defenders X1, X2, and X3 form a line in the paint facing the four offensive players. A coach, player, or manager (C) has a ball along the baseline.

The coach passes the ball to any offensive player (frame 2) on the perimeter and the three defensive players communicate and scramble accordingly (frame 3). Offensive players may pass, cut, screen, and dribble penetrate and try to score.  On any pass, the closest player takes the basketball and closes out hands up butt down with choppy steps. The other two players sprint and get to help.

Here you see the players positioned correctly in frame 4. We use the following verbal commands to communicate our position. X3 says “ball”, X2 says “help” and X1 says “I got 2” referring to guarding both player 1 and 2 on the weak side.  On every pass, each player must jump to the ball and communicate accordingly.

In frame 6 when the ball is in the slot area, X1 is still playing two and must be in position to take away 2 player cutting to basket and still possible take next pass to player 1. X3 jumps to the ball and is in help.  On the slot pass, defender X1 closes out on the ball with high hands and choppy steps. X2 jumps to the ball and communicates help and X3 sprints to the middle of the paint and anticipates either skip to player 4 or pass to wing to player 2.

In frame 8 when the ball is passed to the wing area, defender X3 closes out on the ball and X1 jumps to the ball and is in help position. Defender X2 drops to the middle of the paint and is now playing two on the weak side.  On baseline penetration, the player farthest from the ball playing two must sprint and stop penetration before it gets to the painted area. The other help side defender X1 must sprint to the hoop and help the helper.

On a pass back out defender X1 must sprint to cover the ball and defender X2 and X3 scramble accordingly. 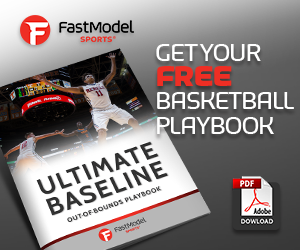 The next drill we use is to help teach post defense and proper positioning if the ball gets into the post. This drill allows you to teach your philosophy on post defense (front, 3/4 front, play behind, double, etc) and properly drill and reinforce it. Drill Setup: four offensive players positioned at the point, wings, and low post. Objective is to get the ball inside to the post from either the wing or top of the key. The defensive is working on 3/4 post and communicate backside help. Drill begins with coach passing ball out to one of the three perimeter players. Defenders position themselves according to your defensive principles (pack or deny).

On a wing pass, defender X5 3/4 denies the post and X1 and X3 jump to the ball and the offense will screen away. X2 pressures the basketball to take away any clean vision into the post.

As the top offensive player screens away at the elbow area, X1 jumps to the ball, opens up and yells “backside”to let X5 know he has help. X3 shoots gap ball side and his ready to help on any middle penetration. If the offense can’t feed the ball into the post, it is quickly reversed to the other side of the floor and the drill continues. The post defender X5 wants to jam the flash and force post player above the block while X1 pressures the basketball and takes away vision of the passer. In frame 8 an interchange between offensive players 3 and 2 will force X2 and X3 to communicate their roles. As X3 drops he/she says “backside”which lets the post player know he/she has backside help. Defender X2 shoots the gap and gets into position to help on any middle drive.

If ball is successfully passed into the post, X5 slides behind on the air-time of the pass and stays between the ball and basket. X2 and X3 are ready to dig in post puts ball on the floor. X1 chokes and denies immediate pass back out to player 1.

In frame 11 we see baseline penetration from the wing area, X5 must get off and provide help before ball gets to the paint. X3 shoots game and takes away post pass and X2 sinks in the paint looks to take 1st pass back out.

The drill can be controlled by the coach and made live at any time by the coach blowing the whistle. Early in the season you may want to see the ball reversed 2-3 times and make sure your players are communicating effectively before making it live.

Up Next: Three drills for teaching your team how to defend common screens and multiple screening actions.