WNBA teams are on the campus of IMG Academy and the season is just days away. While excitement builds for the return of basketball, there is also a lot of question marks. The most obvious question that faced teams in the build up to the season was, “who is going to sit this season out?” Here is a list of some of the impact players who will miss the WNBA season (source: NBC Sports).

The other player who will miss this season is 2019 WNBA MVP, Elena Delle Donne. After joining the 50-40-90 club, Delle Donne led the Mystics to a WNBA Championship. She will miss the season, due to her battle with Lyme Disease. The WNBA doctors declined her for a medical waiver. You can read Delle Donne’s open letter here.

Now that we have covered who will be missing from the WNBA season, it is time to take a look at the teams that will compete for the WNBA Title!

The 2018 WNBA Champions are reloaded, as they return Breanna Stewart (achilles) and Sue Bird (knee). Two seasons ago, this team was a juggernaut in transition, ranking #1 in the WNBA. Stewart and Bird have a huge impact on the Storm’s ability to get out in transition. As you will see in the clips below with  blocked shots, rebounds, chasing down loose balls, leading the break, trailing for threes, and making countless plays for others.

Stewart’s block leads to the break

Stewart rebound and bust out dribble

Bird lead’s the break. Stewart’s post up leads to the weak side 3

Bird collects the loose ball and leads the break

Stewart’s defense leads to a Bird to Stewart trail 3

In the half court, the presence of Stewart and Bird were felt most in post ups and pick and roll situations. In 2018, the Storm were the best in the league at scoring with the screener in pick and rolls. They were second in the league in post up situations. Last year, they dropped to the middle of the pack in both categories. What was the overall effect on their half court offense? The Storm went from top five in half court offense, to ranked 10th of 12 teams. One big question mark for the Storm will be the absence of Head Coach, Dan Hughes, who has to miss due to being high risk for the coronavirus. Regardless, with the return of their two stars and improved depth, the Seattle Storm will be the favorites to win the WNBA Championship.

Here is a go-to set from the Storm’s 2018 WNBA Championship run. 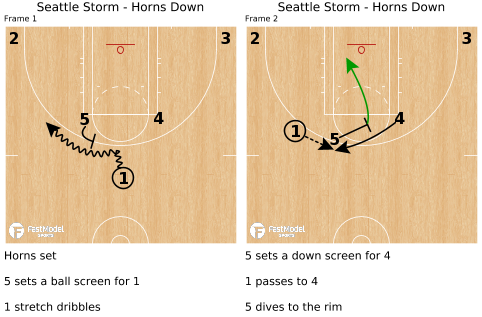 The Los Angeles Sparks had a frustrating end to last season, which caused a lot of people to forget about their 22-12 record. One concern is that the Sparks were a league best 15-2 at home, but the ‘Wubble’ offers no home court advantage. Some of the biggest criticism was pointed towards Coach Derek Fisher. Despite all of the noise, Fisher had a lot of positives in his first season in the big chair. The Sparks were the #1 half court defensive team in the WNBA, which paired with their Top 5 offense. Furthermore, Fisher had the Sparks as the top ATO (after time out) team in the league, at over .9 PPP (points per possession). The biggest loss for the Sparks will be Kristi Toliver, who has opted out of the season. Toliver was the most efficient pick and roll player in the WNBA last year. Without Toliver, the Sparks will continue to rely on a steady dose of screens, cuts, and dribble hand offs. The Sparks were the top team in the league in scoring on cuts and hand offs.

When half court sets or actions break down, the Sparks love to flow into a DHO

The Phoenix Mercury are another serious contender for this year’s WNBA Title. The team gets back a healthy Diana Taurasi, who will pair in the backcourt with newcomer Skylar Diggins-Smith. Diggins-Smith will allow the Mercury to move Taurasi around, as the two players compliment each other well. Obviously, Brittney Griner is a league MVP candidate, but the x-factor might be Brianna Turner. With DeWanna Bonner gone, the Mercury are looking for Turner to take another step forward. The Mercury were a top five defensive team, if you eliminate their league worst transition defense.

On the flip side, the Mercury were the most efficient transition team in the WNBA, despite getting into transition on less than 10% of their offensive possessions. The lack of transition offense might be attributed to having one of the best half court offenses, powered by their league-best post up offense (Griner), and a strong pick and roll game.

Griner is a force in the paint, making her a candidate for league MVP Our final contender will probably not show up in that position on many WNBA Previews. Like last year’s Connecticut Sun team, which was classified as a “collection of role players,” this Chicago Sky team will need to lean on a collection of players to make a run at the title. The Sky have more returning players on their roster, than any other team in the WNBA ‘Wubble.’ With eight players from last year’s roster, this team has a clear identity. That identity underwent a much needed makeover last year, which was a refreshing sign.

A year later, the Sky clinch a playoff berth by playing at the fastest pace in the WNBA, while being top 3 in threes attempted per game. #PaceAndSpace#WNBA@herhoopstats https://t.co/CIvGKSnlaV

The Sky made a major jump in two areas last year. Half court offense (from 9th to 2nd) and defensively. During the 2018-2019 season, the Sky were the worst defensive team in the league. Last year, Chicago was the best transition defense in the WNBA, which allowed them to become an average defensive team. With a lack of rim protection, the Sky were still hurt by post ups and offensive put backs. The overall defensive improvement allowed their dynamic offense to guide them to the playoffs. With the addition of rookie Ruthy Hebard and Azurá Stevens to help inside, the Sky are capable of making a run to the WNBA Finals. Courtney Vandersloot, Allie Quigley, Diamond DeShields, and Gabby Williams lead one of the best offensive cores in the league.

Vandersloot to DeShields for 3

With a shortened season and unprecedented circumstances, anything could happen, but these four teams are our favorites for the WNBA Championship. Below are our picks for three of the top awards.

What now? Go subscribe for “The Best Bargain in Basketball,” as we wrote in August of 2018. WNBA League Pass is only $16.99 this season. CLICK HERE to purchase the entire season.