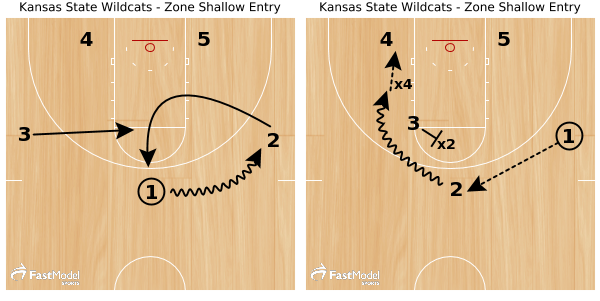 Facing a 2-3 zone can be challenging. At the end of the day, your players just have to knock down open shots when they come. It is really that simple. You move the ball, make skip passes, attack gaps, go inside-out, hit the short corner and hope that the shots fall.

In this edition of Plays of the Week, we borrow two zone lob sets from the Kansas Jayhawks that could yield a quick, high-percentage look and make cracking the zone a bit easier.

We also look at an entry by Kansas State that you can add to your standard zone offense.

And lastly, we explore a simple five-out zone continuity offense that is great for a team with interchangeable parts.

Bill Self often goes to lob plays against a 2-3 zone. In this design, the Jayhawks set two inside seals on the top defenders. The point guard then attacks the gap created. The guard can take the pull-up jumper if X5 does not step up.

The 4 gets a good seal on the wing defender (X4) and that opens up the lob. We all are not blessed with 6’11” finishers like the Jayhawks, but this could easily be modified from a lob to a simple pass to 5 for an easy basket.

This could be a good set after a timeout when you are certain you will see a 2-3 zone.

One of the best zone offense concepts is to dribble off the top. It drags the defenders and can distort the zone.

Here, Kansas point guard Frank Mason dribbles off the top and that action pushes Wayne Seldon to the weakside corner. (Tip: Seldon is a good shooter, so put a good shooter in that spot!)

When 1 passes to 2, 2 makes a pass fake towards Seldon in the corner. Pass fakes are another excellent zone concept for the zone reacts to the ball and with a pass fake you can move pieces of the zone where you want them.

This pass fake combined with a good shooter like Seldon arriving in the corner causes X4 to widen. With X4 outside of the weakside stack, Tennessee is in trouble.

Kansas has their “bigs” in a weakside stack formation with the screener at the bottom of the stack. As the ball returns to Mason, Perry Ellis (4) seals X5 and Cliff Alexander (5) loops behind for a lob dunk.

Again, you may not be blessed with a McDonalds All-American like Alexander, but a simple pass for a layup will do. This is another great after timeout set.

Another basic zone offense concept is to use an odd front offense when facing an even-fronted zone. The standard three-guard offense with a high post and short corner runner against a 2-3 zone reflects this principle.

By adding entries into the standard zone offense, you can give the defense a new wrinkle and still ultimately arrive in the standard three-guard alignment.

In the entry below, Kansas State dribbles off the top of the zone and the wing makes a shallow cut to the point. The weakside wing flashes into the heart of the zone, but by dribbling off the top and dragging the top defenders to the offensive right, K-State has set up a perfect angle for a ball screen when 2 catches up top.

One of the basic tenets of zone offense is to distort the zone. Screening the zone distorts the zone effectively. Here, K-State is able to make X4 step up and defend and that leaves the short corner open for a shot.

In the second clip, K-State uses this action to get into their basic zone offense. Ball movement and cutting through the zone are vital to zone offense. In this simple continuity offense, all players, not just your “bigs” fill the high post and short corner. Sometimes guards are actually far better in these areas, but rarely get to play there.

The design is great for teams with interchangeable parts. The goal is to create lots of ball reversal and send multiple players through the zone.

Begin in a five-out alignment (odd front vs. even front zone) with your “bigs” in the corners and follow these rules to create the pattern:

Some tips for increased effectiveness: