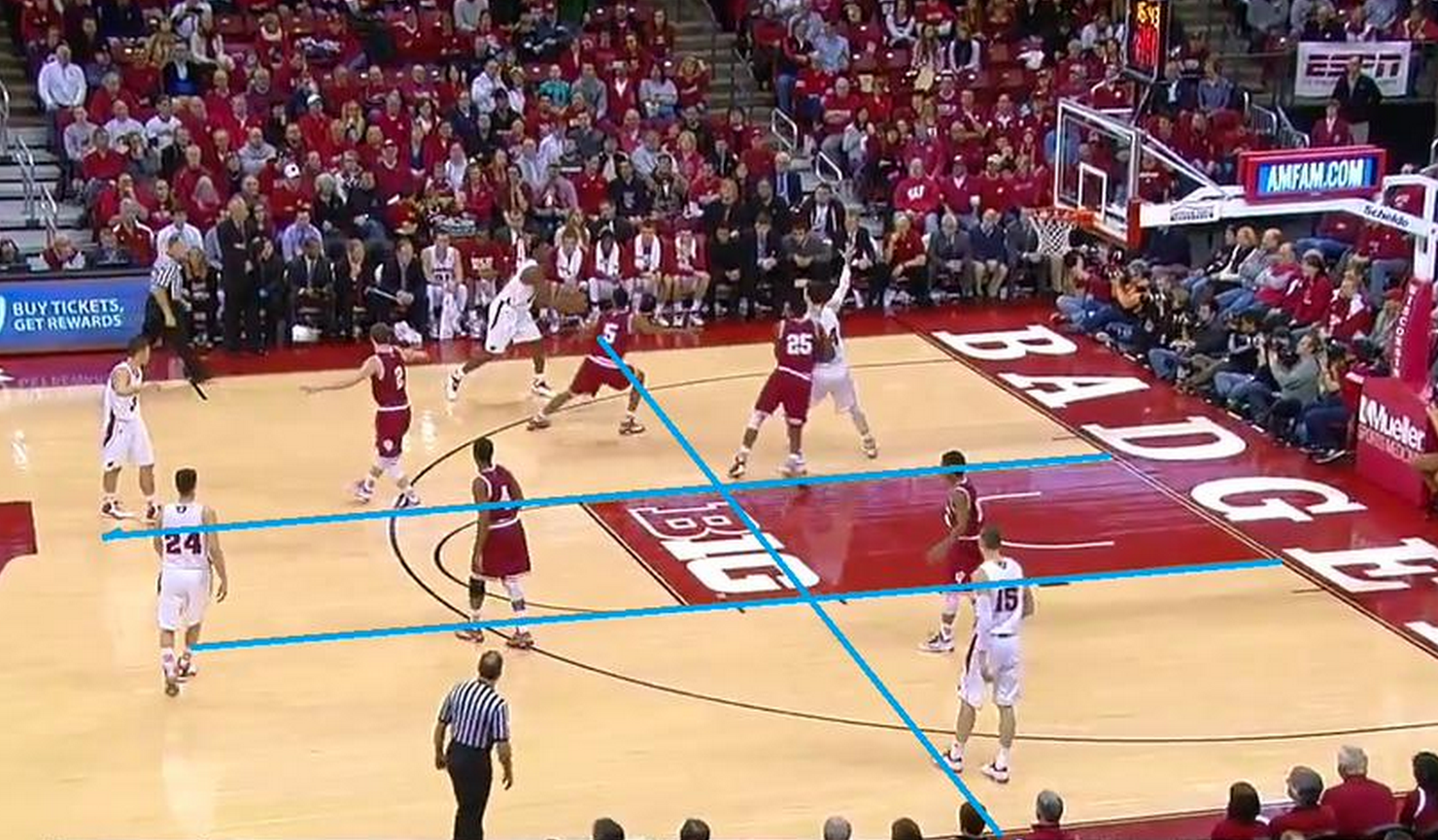 Think of every single downscreen like an at-bat in baseball. The hitter learns more about the pitcher. There are different ball and strike counts to learn from each time a batter goes to the plate. The Minor Leagues exist just so prospects can get “at-bats” and be exposed to different pitches and scenarios.

We’ve already learned the basics of the downscreen, and practiced the four cuts that are used in motion offense with folding chairs and no defenders. Let’s advance by adding a defender to only the cutter.

The wing starts at or above the “motion line.” (NOTE: If you have a practice court, consider taping this line on it. The baseline of a volleyball court that passes through the lane about a foot or so below the free throw line is a good tool as well.)

Begin by specifying to the defender (X2) how you want them to defend the downscreen. Learning first with a fixed read limits initial confusion. Defensive options include:

Consider spending a specified number of minutes for each option during the drill. For teams and players new to motion offense, I recommend working in this order and telling the defense they must play the screen a particular way. It is an elementary first step. The screener passes to coach and makes a quick basket cut with the near foot then goes and downscreens. Teaching points for screeners in this drill:

Let’s give special attention to the out cut. The out cut is run when the defender goes ball side, or under, the screen. Often, players make a straight cut read here and the cutter may make a catch but his/her defender meets them at the ball.

Make sure you run the drill on both sides of the floor. Optimally, you would have a rotation from offense to defense. Work all players as both screeners and cutters…for now.

This is another basic drill for motion offense that can and should be reviewed throughout the year in and out of season.  Come back to it as you noticed cutters making poor reads in your offense.

Also, emphasize the concept of second cutters in this drill. It will all make more sense as we advance to 2/2, but begin building the habit during this controlled drill. Even though they are unguarded, you can mix it up by passing to the second cutter after the cutter runs their action. On second cuts to the outside, make sure screeners get good separation. (bust the arc)

The advancement of this drill is to allow the defender to cover the cutter however they want. Ideally, the cutter walking the arc sets him/her up for success.

Run 2/1 downscreen live only after you feel your group is getting the fundamentals down. When your team is ready, allow the wing defender to play live. They can play the screen any of the four ways. This a great tool for teaching reads from the mistakes they will make.

Emphasize that the defense can only play the screen one of four ways. It is up to the cutter to make the corresponding read.

Each of these downscreen actions are a teaching and learning moment for both the screener and the cutter.