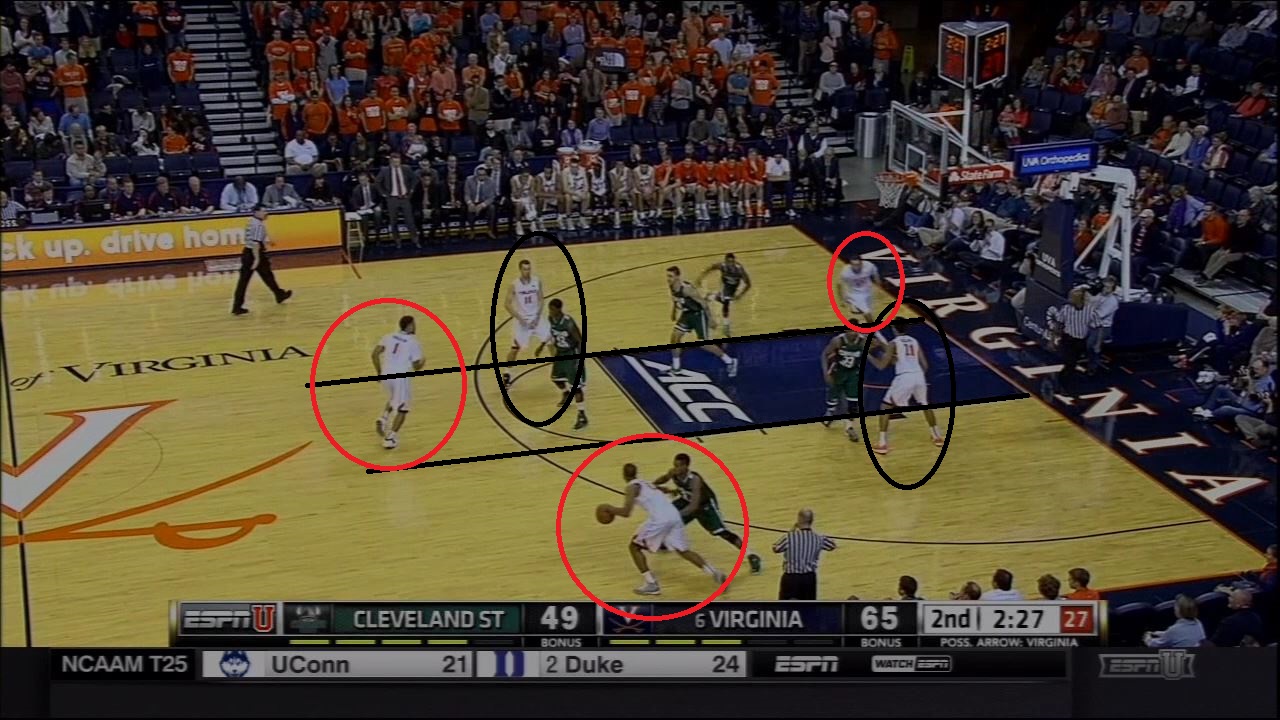 Much of the talk from college basketball fans and media this season has been about the Kentucky Wildcats and their pursuit of an undefeated season. Rightfully so, John Calipari’s crew has a chance to make history.

However, the team that I get asked more about than any other team by coaches is the Virginia Cavaliers. Coaches are enamored with their defensive approach and their overall “team” concept.

With no McDonald’s All-Americans on their roster Virginia (28-1, 16-1 ACC) has now won back-to-back outright Atlantic Coast Conference titles. They are the first team from outside of the state of North Carolina to do so.

The Cavs’ defense is a treasure. By using packline principles that were invented by his father Dick Bennett, Virginia head coach Tony Bennett has built a team that leads the nation in adjusted defensive efficiency.  But Virginia did not make it to 28-1 without a sound offensive philosophy to match their suffocating defense.

Bennett again borrows from his father and uses the Mover-Blocker motion offense. It is a motion offense that uses two screeners, or “blockers” as they are called in the Virginia system, and three “movers.” In the photo below the movers are circled in red and the blockers in black. The Cavaliers most often use the Lane-Lane mode of the Mover-Blocker offense. These are the concepts of this mode of the offense. In the video below note how the Cavaliers follow these offensive principles. The blockers set screens along the lane line as the movers cut and maintain top-side-side alignment.

The movers demonstrate curls, out cuts and read the defense in the screening action.

At times, Virginia allows one of their blockers to screen from midline to sideline on his side of the floor. This is the “Lane-Wide” mode.

In the lane-wide alignment of the Mover Blocker offense, there is one lane screener just as in lane-lane. There is a wide screener that can screen from midline to sideline on his/her side of the floor. It is a good way to add spacing to the offense, utilize a skilled forward and add more variety to the screening options In the video below, #11 Evan Nolte is the “wide” screener. Note how he utilizes the entire width of the court from midline to sideline on his side.

The “lane” blocker remains along the lane line and screens from there on his side of the floor. Nolte has shooting range and better ball handling skills, therefore he is allowed greater freedom as the wide blocker.

There are more elements to the Virginia offense and we will be presenting those in up coming posts.

Before implementing the Mover Blocker offense, players should have a sound grasp of motion offense fundamentals such as basket cuts, down screens and reading the defense. Virginia certainly works on the skill and timing of these motion offense concepts everyday.

Be sure to check out all the information on motion offense fundamentals that FastModel has to offer.