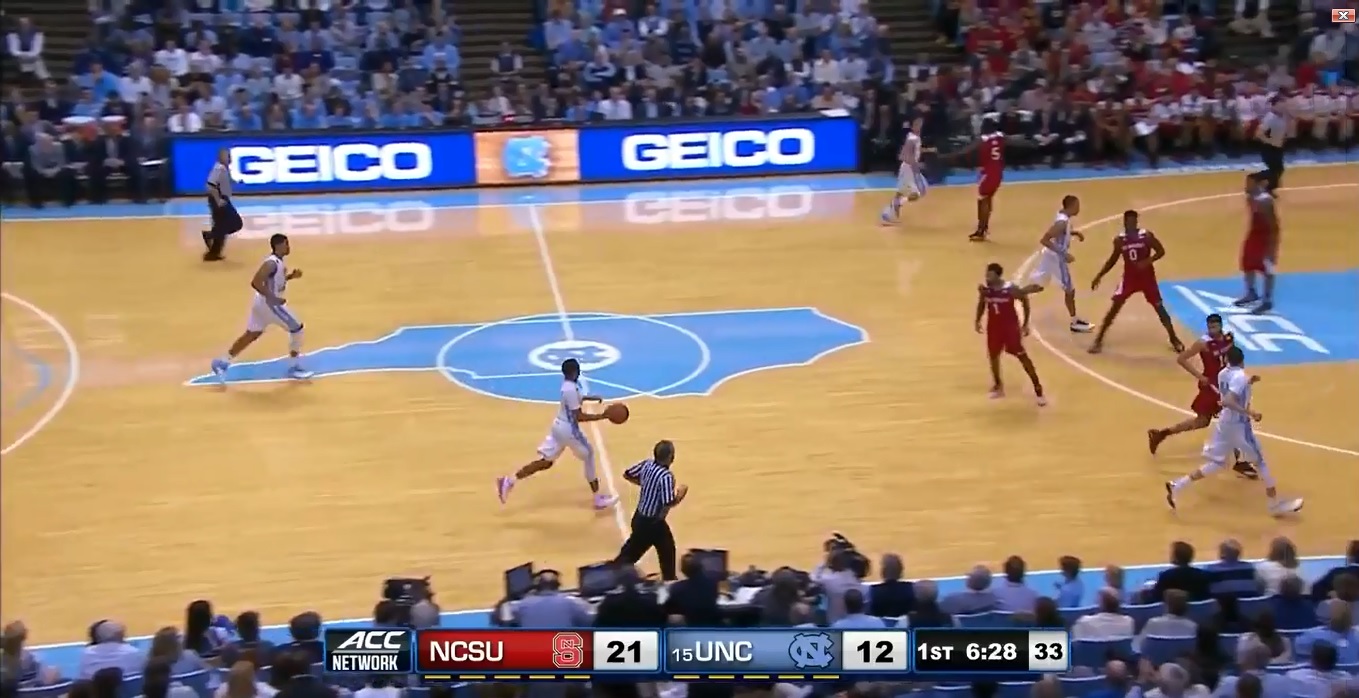 In Part One of a three part series on the North Carolina transition offense, we look at the primary break and ways to commit to playing fast.

The North Carolina Tar Heels, led by head coach Roy Williams, are known for their transition offense. Specifically, the secondary break is a Tar Heel trademark.

To best understand how to install a running game into your offensive attack, we will use the North Carolina transition offense and break it down into three parts:

The primary break is most effective when there are clearly defined roles. There is ONE outlet target – the point guard. Ambiguity slows down the transition from defense to offense. The team should understand that there is a sole outlet target and he/she alone is responsible for receiving the outlet pass.

The outlet target must get wide and away from the clutter of players that recover in the middle third of the floor. Establishing these clearly defined roles in your transition offense gives others not involved in the rebound and outlet freedom to run.

There is ONE inbounder on an opponent’s made field goal. Use the forward (4) to be the designated inbounder after made field goals. The forward will also be the trailer in the secondary break. Makes sure the group on the floor always knows who is the inbounder and outlet.

The three players not involved in the outlet should SPRINT in their lanes and get to top speed within the FIRST THREE STEPS. Making this a habit is key to creating points in transition. Evaluate this on film with every rebound and made field goal. North Carolina’s break is deadliest when the post players run and run hard. The “rim run” by the 5 or the non-rebounding big man is key to making the attack work. After the point receives the outlet, the pass can go directly from 1 to 5 on the rim run.

2 sprints to the dead corner to make the defense recover a full 94 feet. The players running the wings should look for ball over their inside shoulder. Sprinting deep into the corner is key as it makes the defense flatten and recover the full length of the court.

Point guards look to “pitch ahead” after one or two dribbles. If the point guard cannot pitch ahead, he/she should “dribble through the wake” made by the recovering defense. (frame 4)

5 posts their man in the paint in transition. He/she should post their defender deep in the lane with both feet in the paint. The wing that receives the advancing pass should look inside to 5 immediately.

If the wing cannot enter the ball directly to the post, they pass to the point guard filling above them. This begins the secondary phase of the break which will be covered in part two of this series.

Building a running game begins with habits built in practice. Emphasize running and getting to top speed in the first three steps to supercharge your offense.