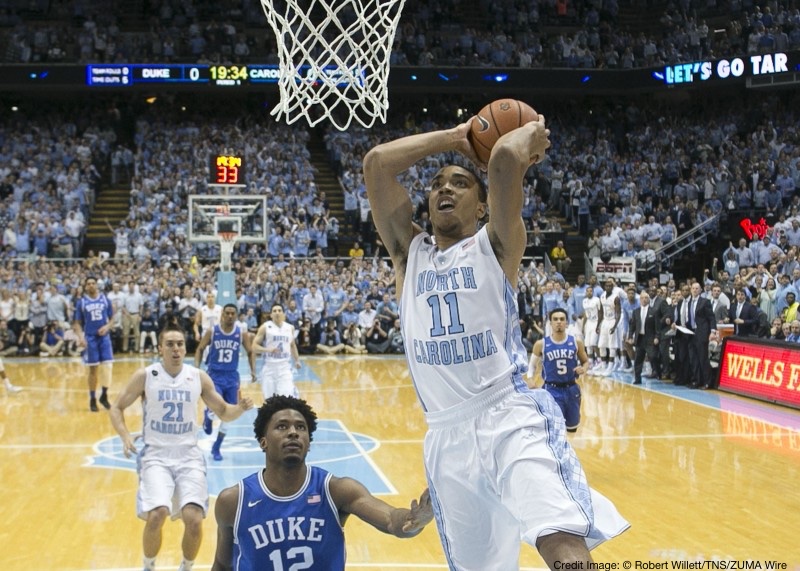 In Part Two of a three part series on the North Carolina Tar Heels’ transition attack, we take a look at the “Regular” or pass reversal option of the secondary break.

The North Carolina Tar Heels have run their way into the Sweet Sixteen with wins over Harvard and Arkansas. The Heels next face #1 seed Wisconsin and using their speed advantage and playing out of their secondary break might well be the recipe for the upset.

Last week we took a look at the basics of North Carolina’s primary break and some of the structure in place for outlet passes, running lanes and advancing the basketball quickly. If the Heels do not have a three-on-two or two-on-one numbers advantage, they use their secondary spacing as we discuss and diagram in this post.

Often, North Carolina gets the ball into the post directly from the “rim run” without having to reverse the ball. If the Carolina post man has out run his defender or if the defense is preventing the “pitch ahead” to the wing, the point guard can enter the ball straight to him.

If the point guard is able to pitch ahead to the ballside wing, he/she can enter to the post on the rim run. Below is a look at North Carolina rim run and first post possessions. (Note the high and wide outlets with the point guard wide to the sideline as discussed in the previous post.)

If North Carolina does not have a numbers advantage or is unable to enter to the first post down, they want to reverse the ball. The North Carolina secondary break is read-based and the most often used read is the pass reversal or “Regular” option. In this option the ball is completely reversed through the trailing big man. The original ballside wing then back screens for the trailer. Make sure he/she touches the block before setting the back screen. This sets the proper screening angle (back to the rim).

Below, North Carolina demonstrates this option. Note in the last frame how the screener, when setting a solid back screen, causes help and is open for a three due to forcing the long hedge on the cutter.

If the lob is not in the air as the trailer (4 in the diagram) comes off the back screen, he/she sets a block-to-block cross screen for the low post who has followed the ball upon reversal. Roy Williams calls this action “finishing it.”

The back screener steps out after screening and receives the centering pass. He/she has the option of either low post players as they execute the cross screen. Both low post players show their hands to the ball and expect the entry.

The “Regular” option terminates in a three-out-two-in alignment. From there the Tar Heels can seamlessly get into their freelance passing game motion offense.

The keys to making this transition system work are securing defensive rebounds, quick outlets that are high and wide, pitching the ball ahead as soon as possible and getting to top speed in the first three steps.

Take the numbers advantage if it is there or enter into the first post, but if the defense is recovered, swing the ball using this pass reversal option.

In the third entry to the series we will look at some other commonly used options of the North Carolina secondary break.