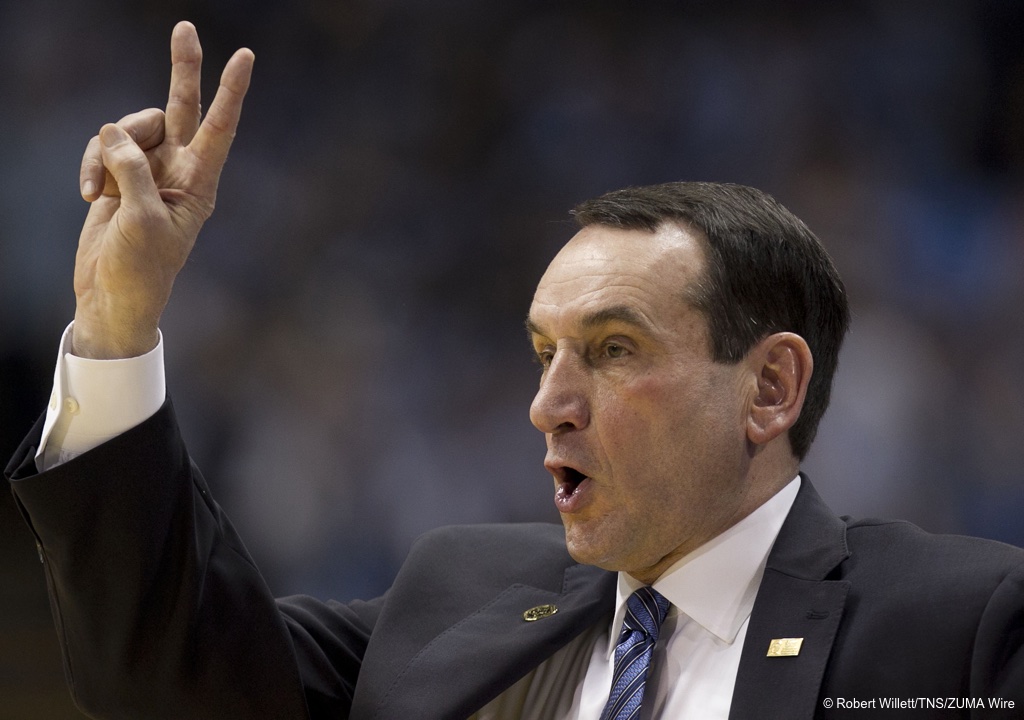 Mike Krzyzewski has his Duke Blue Devils dancing in the Final Four once again. This is Coach K’s 12th trip to the Final Four. The last time Duke made it to the Final Four in 2010, the Blue Devils won a NCAA Championship over Butler. In 11 previous Final Four appearances, Duke has won the NCAA Championship four times (1991, 1992, 2001, 2010) and finished runner-up four times (1986, 1990, 1994, 1999). This season, Duke is 33-4 with a 9-1 neutral record (could help advancing through the rest of the tournament). Although Duke did not win the ACC regular season or conference tournament championship, the Blue Devils have outlasted the rest of the ACC in the tournament and will take on Tom Izzo’s Spartans on Saturday. Below you will find plays that Duke has used in all four NCAA Tournament games. By accident, the majority of these plays ended up being Justise Winslow highlights. This is not a huge surprise as Winslow has played a big impact in the tournament games providing a spark when Duke has needed it.

Duke’s first game in the NCAA Tournament came against Andy Toole’s #16 Seed Robert Morris Colonials. The Colonials played well in glimpses to keep the game close, but a 12-0 run by the Blue Devils in the second half allowed Duke to pull away. Robert Morris played quite a bit of 2-3 zone, so the two plays from Duke are zone actions to get the ball inside to Jahlil Okafor or Marshall Plumlee.

Duke Zone Over the Top – This play was used early in the game against Robert Morris and resulted in a foul down low as Okafor went up for a shot off of the hi/lo pass. Coach K does a great job creating an overload that forces Robert Morris to spread out and leave 1 defender on Okafor under the basket. Okafor seals the middle man in the zone and looks for the pass over the top. In the game, x4 could have helped on the lob pass but was stuck anticipating that the ball would be pass to Tyus Jones for a 3-point shot. Duke Zone Hi-Lo Runner – Coach K called this play in the second half of the game against Robert Morris. The play sends the point guard running across the baseline to the opposite corner against the zone. Both post players inside look for opportunities to seal their defenders. Once the ball gets inside to 4, he looks to shoot, pass out for a 3-point shot, or pass down to 5 cutting to the basket. In the Round of 32, Duke took on #8 Seed San Diego State. Okafor dominated the first half of this game scoring 18 points and finishing the game with 26. Winslow scored 13 points and pulled down 12 rebounds. Duke’s defense stepped up holding the Aztecs to 32.8% shooting from the field and 15.4% shooting from 3-point range. On the other hand, Duke shot 54.5% with solid man-to-man actions that forced San Diego State to chase the Blue Devils around the floor.

Duke Horns Fake Handoff Down – This play was used against San Diego State to get an open 3-point shot at the top of the key. The play starts with a high post entry and a fake dribble hand-off action to the left side. On the right side, a down-screen is set for 2 who cuts up off of the screen to get the hand-off from 4. In doing this, a staggered screen is essentially set for 2 leaving him open at the top of the key for a shot. Duke Motion Dive – Against the San Diego State Aztecs in the Round of 32, Duke used this motion action play to get the ball to Okafor posting up on the left block. With all of the attention on Okafor, Winslow dives down the lane and gets an easy dunk off of a pass from Okafor. Duke did a great job in this game getting SDSU to chase them around the floor. In the closest game for Duke so far in the tournament, the Utes gave the Blue Devils a scare keeping the game close. Duke eventually won by six points led by Justise Winslow’s 21 points and 10 rebounds. No surprise here that the plays are used to get Winslow a shot. In the second play “Horns High Entry Hi/Lo”, Duke turns the ball over but it was clear that Okafor was looking to pass to Winslow posting up a smaller defender down low.

Duke Thru DHO Shot – Duke used this play in the first half against Utah. The play starts with Cook dribbling towards the right wing pushing 2 towards the free-throw line. Cook’s first look is inside to Okafor posting up. If he isnt’ open, Cook looks at 4 popping out after the screen. 4 then dribbles left and gives the ball to Winslow on a dribble hand-off. Winslow stops behind the hand-off and takes the 3-point shot. In the Elite 8, Duke took on #2 Seed Gonzaga. Winslow again stepped up in this game playing in his hometown of Houston and scoring 16 points. Although Duke did not shoot well from the floor, they went 8-19 from 3-point range. Big shots were made by Winslow (2-4 from 3-point range) and Matt Jones (4-7 from 3-point range). Gonzaga shot better from the floor, but struggled from deep. In addition, Gonzaga shot 10 fewer free-throws than Duke and turned the ball over 13 times (compared to Duke’s 3 turnovers). In the first play, Winslow gets the ball on a kick-out from Okafor being double-teamed. The second play gets Winslow open on the wing off of a pick-the-picker action. Winslow makes a good shot fake and drives to the basket for the score.

Duke Okafor ISO – Duke used this play against Gonzaga to open the game and get the ball inside to Okafor. Once Okafor got the ball, two Zags double-teamed leaving Winslow wide open on the wing for a 3-point shot. The play starts with Tyus Jones giving a “thumbs down” signal and a down-screen set for 4 in the corner. 4 curls the screen and sets a cross-screen for Okafor. On the screen, Okafor is open on the block for a pass inside. Duke BLOB PTP Triangle – This play was used by Duke with 15:31 left in the 2nd half against Gonzaga when Duke was down by 2 points. The play uses a pick-the-picker action to get Winslow the ball on the wing for an open shot. In the game, Winslow made a good shot fake and drove to the basket for a lay-up. The most important part of this play was a good screen set by Winslow forcing his man to help on the initial cut. Once he pops to the wing, Winslow’s defender is stuck on the other side of Plumlee. Surprisingly enough, the last time the Final Four was in Indianapolis the Blue Devils won the NCAA Championship. It will be interesting to see Coach K and Coach Izzo battle it out. Duke has the nod inside with Okafor, but the Blue Devils will have a challenge stopping the balanced scoring attack from Travis Trice, Denzel Valentine, and Branden Dawson. Enjoy the games! Should be an exciting Final Four!