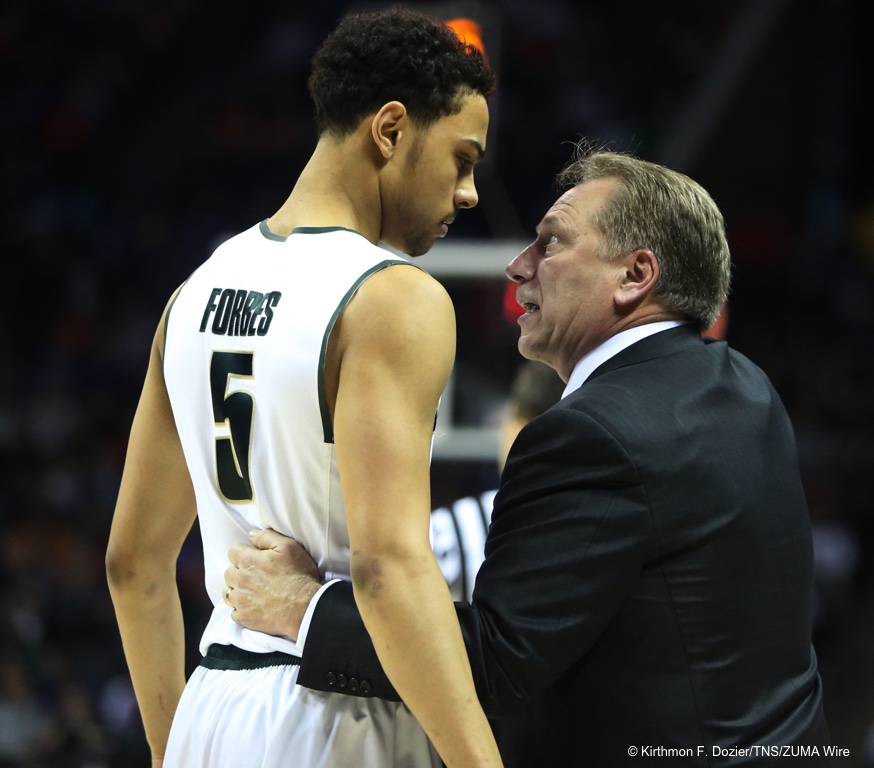 Most counted them out early. Surprising many, Michigan State has now reached the Final Four. Though Michigan State has qualities of traditional Tom Izzo teams such as offensive rebounding and toughness, they are unique. They are shooting more outside shots-less paint shots, which is ultimately stretching the floor, allowing for a higher PPP in transition offense (1.275) than previous years.

They are versatile offensively because they have players that can play multiple positions (i.e. Trice as 1, 2, 3 … Dawson as 3, 4, 5 … Valentine as 2, 3, 4). Offensively, a major concern for Michigan State is their, at times, questionable shot selection, and their inability to attack pressure, specifically hard hedges and traps in pick and roll offense. Michigan State has a tendency to run the same play 3, 4 or even 5 times in a row depending what quality of shot selection they are getting.

From round to round, Michigan State’s most common set has been “Chest” (Wings receiving down screen from 4 and 5), and they also look to utilize their secondary break (dribble handoff with weak side down screen). If Michigan State’s offensive set breaks down, they look to go into side/high pick and roll or isolation for Travis Trice.

Michigan State “Chest” – Michigan State utilizes this set to free up shooters and create dribble penetration opportunities for guards. If the guards decide want to throw ball into the post from the wing, but cannot, the weak side big flashes to the high post looking for high low. Michigan State Over Under Play – Here is a set that Michigan State specifically ran to free up shooters while giving their post men opportunities to post up.