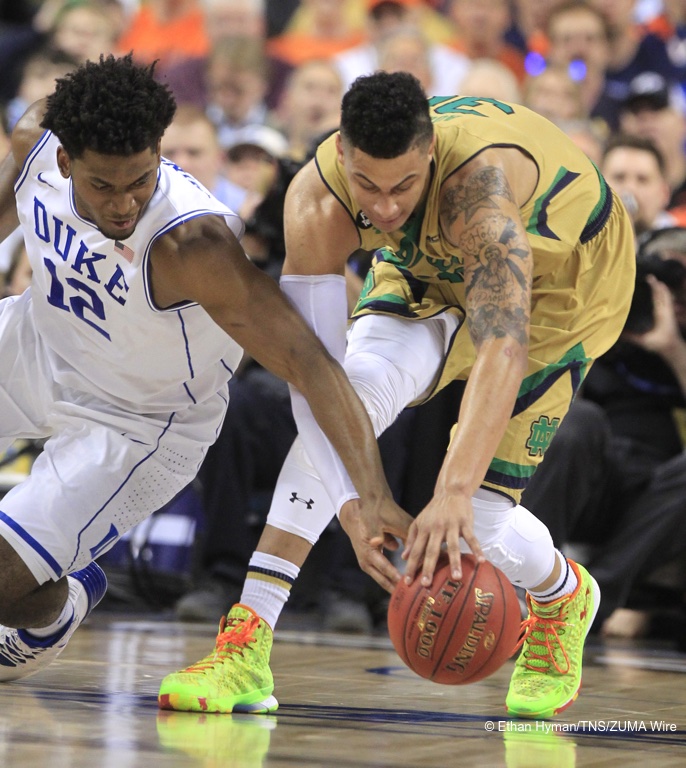 This season, Duke brought in four talented freshman (half of the eight scholarship players on the team). Through most of the season and early in the NCAA Tournament, Duke was led by the freshman trio of Jahlil Okafor, Tyus Jones, and Justise Winslow. Mid-season, Rasheed Sulaimon was dismissed from the team leaving Duke fans wondering if the freshman group could lead Duke to another Final Four run.

NCAA Tournament: Duke earned a #1 Seed in the South Region of the bracket. The Blue Devils breezed through the first two rounds downing Robert Morris and San Diego State in Charlotte. In Houston, Duke played Utah in a close battle but found a way to win 63-57. Utah would prove to be Duke’s toughest foe on the way to the Championship Game. The Blue Devils beat Gonzaga by 14 points and Michigan State by 20. Check out the X’s & O’s that took Duke to the Final Four here.

Championship Game: Coach K did a great job continuously going to what was working for Duke throughout the game. In the closing minutes, the go-to players were Grayson Allen and Tyus Jones. With Allen’s performance, Duke’s Trio of Freshman became the “Fab Four”.

Grayson Allen: Allen scored 16 points and had a ton of success driving to the basket against the Wisconsin guards.

Wisconsin collapsing on Plumlee inside leaving Allen open for a 3-point shot: Duke – Allen Middle Drive – Duke went to this play multiple times in the game. Although simple, the play utilizes the strength of Allen’s penetration skills. Allen gets the ball on the left wing and drives from left to right to the rim for a lay-up. Wisconsin did not collapse on the penetration allowing Allen to make the 1 on 1 play at the basket. Duke Baseline Run Side PNR – In this play, Grayson Allen runs the baseline as Plumlee sets a ball-screen for Tyus Jones. Jones takes the ball-screen into the middle of the floor as Plumlee rolls to the basket. In the game, Jones hit Plumlee on the roll and all 5 Wisconsin Badgers collapsed into the post. Allen cut up from the corner and was sitting wide open for a 3-point shot. Tyus Jones: Jones was outstanding driving left to right using ball-screens from his big men. Like a veteran player, Jones attacked Kaminsky off of the ball-screens and waited for the perfect moment to pull-up for a jump shot. Throughout the game, the Wisconsin guards kept getting caught on the ball-screens and by the time they got around Jones was already taking the shot. Jones hit several big shots down the stretch to ensure the win for the Blue Devils.

Jones creating space on the ball-screens: Duke Top PNR – With 1:36 left in the game vs. Wisconsin, Tyus Jones hit a huge 3-point shot to put the Blue Devils up 66-58. The play started with Jones dribbling to the left as Winslow looped around to set up for a ball-screen. Jones waved off Winslow sending him out to the wing. Okafor sprints up to set a ball-screen for Jones. Koenig goes over the top of the screen and Kaminksy is moving backwards as Okafor rolls leaving just enough room for Jones to pull up for a 3-point shot. Duke High Overload PNR – In this play, Tyus Jones attacks from left to right off of a high ball-screen with an overload on the left side of the floor. The open space puts even more pressure on Kaminsky to stop the penetration and guard the roll. Jones came off of the ball-screen as if he was going to attack the rim, but instead pulled up at the elbow using Koenig’s momentum against him. In the end, it came down to great players making even better plays. Wisconsin could have easily been the champions if Duke missed some of the difficult shots down the stretch. With or without these freshman around next season, the future looks bright for college basketball.