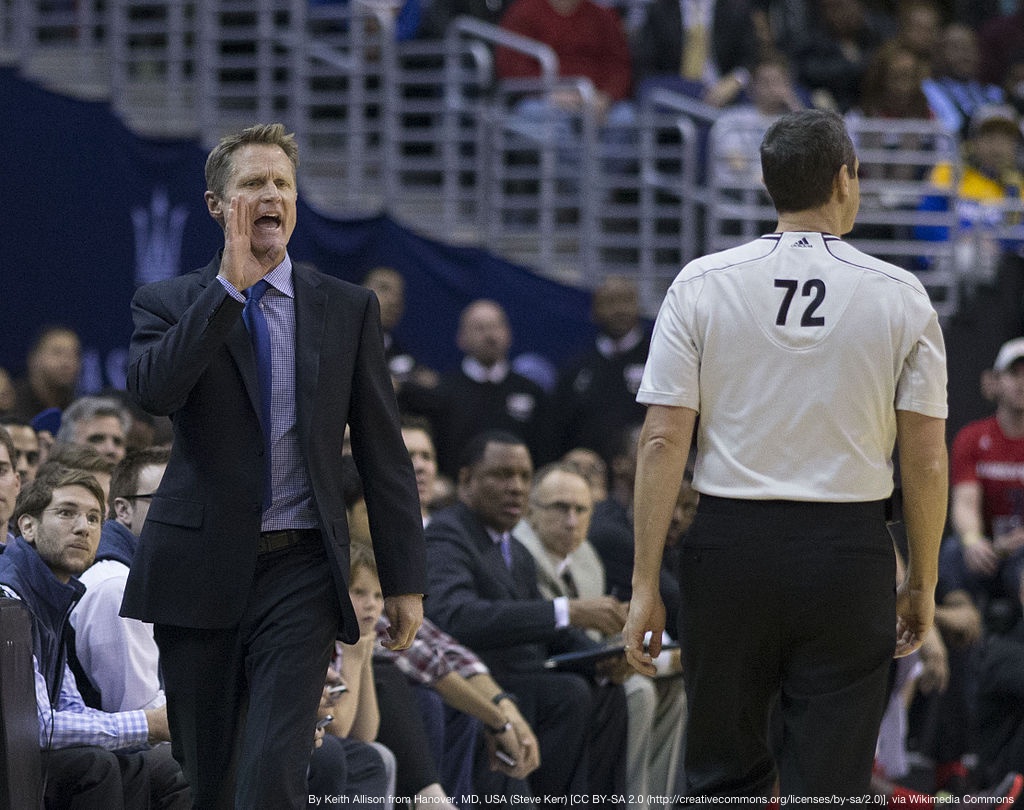 The Golden State Warriors have been the most dominant team in the NBA this year. They blend the perfect amount of quality players and sets that always put the defense in tough spots. Having Steph Curry & Klay Thompson with shooters to space the floor, their offense is unguardable at times. Here we will take a look at some of the sets they run to both exploit & create mismatches, as well as creative sets to get Steph & Klay to attack out of.

The Golden State Warriors run what they call “Elbow” in which they run as a quick hitter out of their base motion offense. Typically they run Spurs like motion from double stagger and single down action into Horns ending up with the bigs at the elbow. One of the advantages this set holds is Draymond Green is an excellent athlete that can defend the opponents power forward and create an offensive mismatch. After running the initial action, the point guard (typically Steph Curry) passes to the big at the elbow and cuts through to set a “rub” screen for the opposite big at the elbow, who then curls to the rim looking for the pass for the layup. This set has been very effective, especially when Curry sets the screen and pops to the perimeter, forcing his man into a “no help” situation. Another great set that forces the defense to either switch in a mismatch or get beat for a layup is the Golden State Warriors Zipper Down DHO. The Warriors run their zipper series effectively and this is a nice wrinkle to create an advantageous situation by putting Steph Curry & Klay Thompson in a Pick & Roll situation. In end of quarter & half situations the Warriors run what everybody in the world runs: a high pick & roll with their point guard and center. The only difference is they run action with options before they set the high pick & roll, with a guard setting a down screen for the big and then coming off a screen on the wing. The point guard now has options to attack with the defense moving, those options are:

2) Look to the roll man off the initial Pick & Roll

4) If the big who set the screen on the wing sees his man overhelping, he slips to the rim for a layup Another set the Warriors use to get Harrison Barnes to attack out of the Pick & Roll and put defenders in a tough spot is a Horns set with Barnes at the 4. They put both bigs at the elbow and pass it to Barnes, the other big sets a ballscreen and rolls to the rim allowing the Warriors to have the advantage by putting the opponents bigs both defending the ballscreen. This set really works because the Warriors ability to play small and space the floor with shooters. The only other teams that can run this set and have the floor spaced effectively is the Cavs (LBJ at Elbow, Love in the corner) & Clippers (they run it with Blake as PNR ballhandler). Alot of teams run the “Weave” set where the guards execute dribble handoffs on the perimeter with each other side to side to create defensive movement. This usually ends in an action such as a ballscreen, backscreen, or flare screen and the Warriors run it nice with a wrinkle most teams cannot, with Draymond Green (or another good ballhandler at the 4) setting it up. They run the “Weave” set probably the best in the NBA (I believe only the Cavaliers run it better) and with the personnel they have it is very difficult to defend. In transition, having Steph Curry is a luxury. He is insane at times and is off the charts with how effective he can be dribbling around and shooting. It may look like he is just dribbling (sometimes he is) but one of the actions Kerr used from the Phoenix Suns is the “Drag Screen” or a ballscreen in transition before the defense is even set up. The Golden State Warriors rendition of this is alot of fun because Steph is so lethal with his jump shooting and allows for easy offense as well. Kerr also has some quick hitters in his playbook, one of them came against the Brooklyn Nets. The Warriors were down in the 4th quarter and Steph Curry started to heat up. Noticing this, after Brooklyn called a timeout to quiet the storm, Kerr ran a nice “Flare/Hammer” set for Steph to get an open look at a 3. In Sideline out of Bounds situations, Kerr likes to run what pretty much every NBA team likes to run, Zipper cut into a high Pick & Roll. Throwing in a nice wrinkle to this typical set, he has his guard inbound the ball who he wants to use the Pick & Roll. Still using a zipper cut to get open, the 2 guard cuts up, fakes using the ballscreen and executes a dribble handoff with (typically Curry) inbounding guard to then use the ballscreen. Tough to guard action that allows Curry to attack out of the Pick & Roll. (Note: video has the Warriors & Cavs both running it, Blatt added it this year as well.)

Just for fun, the Warriors “Dummy BLOB.” Don’t fall asleep on the weakside!!