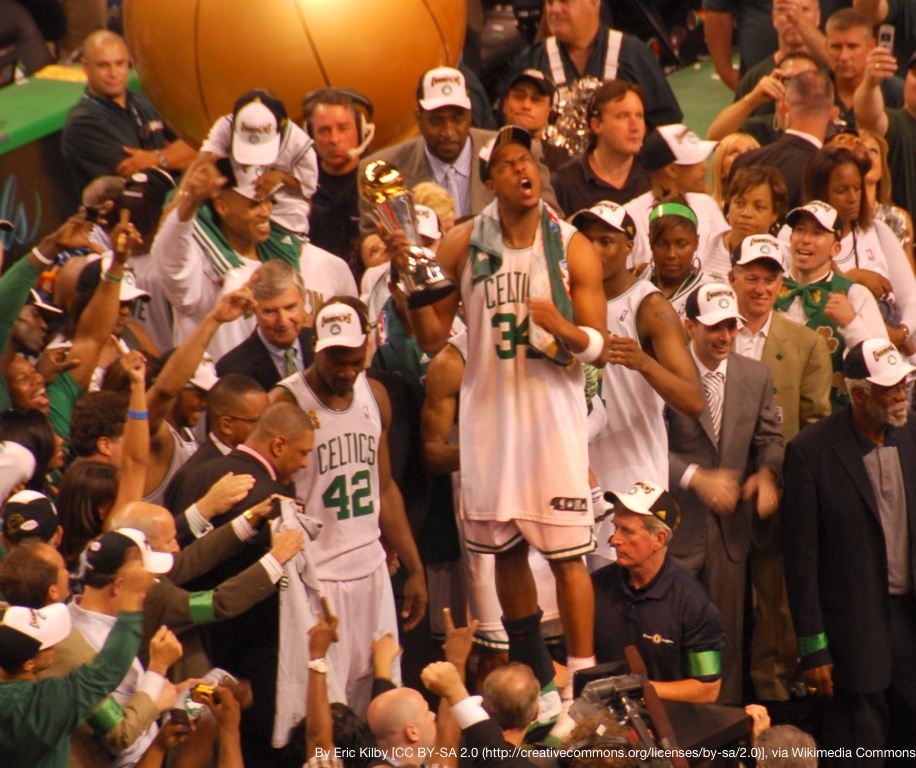 In honor of the Boston Celtics making the playoffs for the first time since the Big 3 era, we are going to take a look back at one of the staples of Coach Doc Rivers’ offense in Boston, the Slice series. In the upcoming Part 2 of our examination of the Slice series, we will look at how Doc Rivers implemented Slice into the L.A. Clippers offense, and how he merged it with the offensive philosophies of Mike D’Antoni that were brought to the Clippers by assistant coach Alvin Gentry.

Like all good sets, one of the benefits of using the Slice series in Boston is that the Celtics could run sets and create scoring opportunities for a number of their different scoring threats all out of the same setup. Ray Allen, Paul Pierce, Kevin Garnett, and even Rajon Rondo had specific Slice sets designed for them, and running one Slice set successfully often sets up a counter set for another scorer. Here are some of the best sets from the Big 3 era.

This is the basic Slice set, and it is a simple way to bring your 2 or 3 to the block for a post up to exploit a mismatch. Pierce was the primary option in the post out of Slice. Rondo’s size often led to mismatches, and this Slice variation used some misdirection to give him a good post up opportunity on the block. The setup looks exactly like regular Slice, but the 2 man rejects the flex screen, allowing Rondo to slip around the 5 and seal his defender. With Ray Allen at the 2, new Slice options are introduced to provide him with catch and shoot opportunities. In Slice Double, the initial action is the same, but it is a setup to get Allen’s defender on the high side in the post, at which time he reverses back off a stagger screen from 4 and 5 with his defender trailing. This is a great counter to Slice Double with KG at the 5. The setup is the same, but instead of Allen coming off of the stagger, he sets a cross screen for KG and then receives a pin down from 4. This option was a quick hitter that could be run at any time in early offense and didn’t need to be a called set. It is a quick reversal to the 3, into a Side P/R. With Pierce at the 3, there are a number of threats here that are difficult to guard. When KG is at the 4, the Pick and Pop is difficult to guard. If x2 pulls in to defend against the duck-in from 5, Ray Allen is sitting in the corner waiting to strike. This is a counter to Slice Roll for teams that deny the reversal pass to 3. Instead of swinging the ball to Pierce, the 4 man, likely KG, goes back into a DHO with 1, and then receives a staggered rip screen from 5 and 2. This is also a counter to Slice Roll. This time, instead of the 4 receiving a staggered rip screen, the 2 receives a stagger screen for a catch and shoot opportunity. If you are lucky enough to have a great player like Paul Pierce on your roster, sometimes no tricks are necessary. A simple Iso play out of the Slice formation is all that you need. Lastly, the Slice formation allows the option to alter your alignment and bring any player off of the flex screen to a post up. In this set play for a KG post up, the play can start out of a normal Slice alignment, or a corner-filled “Weak” alignment.