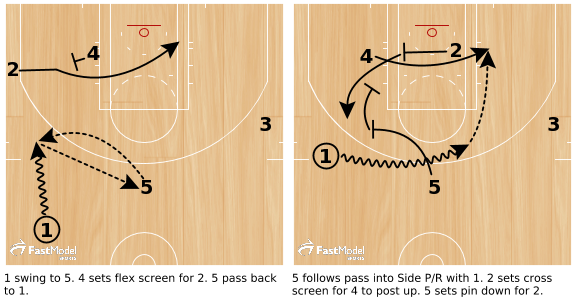 When Doc Rivers took over the head coaching position at the L.A. Clippers, he brought Alvin Gentry on board as his offensive coordinator. Gentry, in addition to being a head coach for multiple teams, spent much of his 2000’s as an assistant coach to Mike D’Antoni. While the offense that D’Antoni used in Phoenix may be more well-known for it’s ballscreens and quick Pistol action, it also featured several sets out of a Slice formation (1 Pop and 4 Pop being the most often used).

With Gentry’s background and Rivers’ success in Boston with the Slice series, they implemented a mix of sets last season out of the Slice formation that catered to the strengths of the Clippers’ roster.

This play comes straight from the D’Antoni playbook, and sets up exactly like the basic Slice action that Rivers used in Boston. While the option is there to bring any great post up player to the block, as D’Antoni often did with Carmelo Anthony in New York, this is really just a Spread High P/R in disguise. This is a money play for Chris Paul. Another version of the basic Slice set. The first look is still a post up, but this set has the added variation of a pin down for the 2 if no post up opportunity is available. Another set out of the D’Antoni playbook, 4 Pop is designed for a shooting 4. While Blake Griffin has improved his midrange jumper each year, the main advantage of this set is putting Blake 1 on 1 against his usually slower defender at the top of the key. His driving ability makes this play an ideal Slice counter for the Clippers, and an option that the Celtics likely would not have been able to utilize with KG. A clear side P/R with Blake and CP3 is also a great 2nd option to have. Where the Celtics best utilized the Slice series with KG as the trail big, the Clippers prefer to have Blake start on the block. As the head coach of the Suns, Gentry used to run this play frequently to get Jermaine O’Neal post ups at his right block sweet spot, and last year the Clippers used this setup to get Blake catches at his left block sweet spot. If the post up is not there, the 2 and 3 can play out 2nd side action for additional options. This option is very similar to the Slice Reverse option that Boston ran, and is another counter to get Blake a post up. The added wrinkle in L.A. is the addition of a 1-5 Side P/R. The 2 Pop option is a set designed to feature the 2 man. The first look is a catch and shoot off of the stagger screen set by 1 and 4. If no shot is available, they are now in a Spread P/R alignment for the 2. Lastly, when you have a point guard like Chris Paul, you have to give him the option to call his own number. Exactly like Rondo would run Slice 1 in Boston, Paul has the freedom to call this play anytime he feels he has the size advantage against his man.