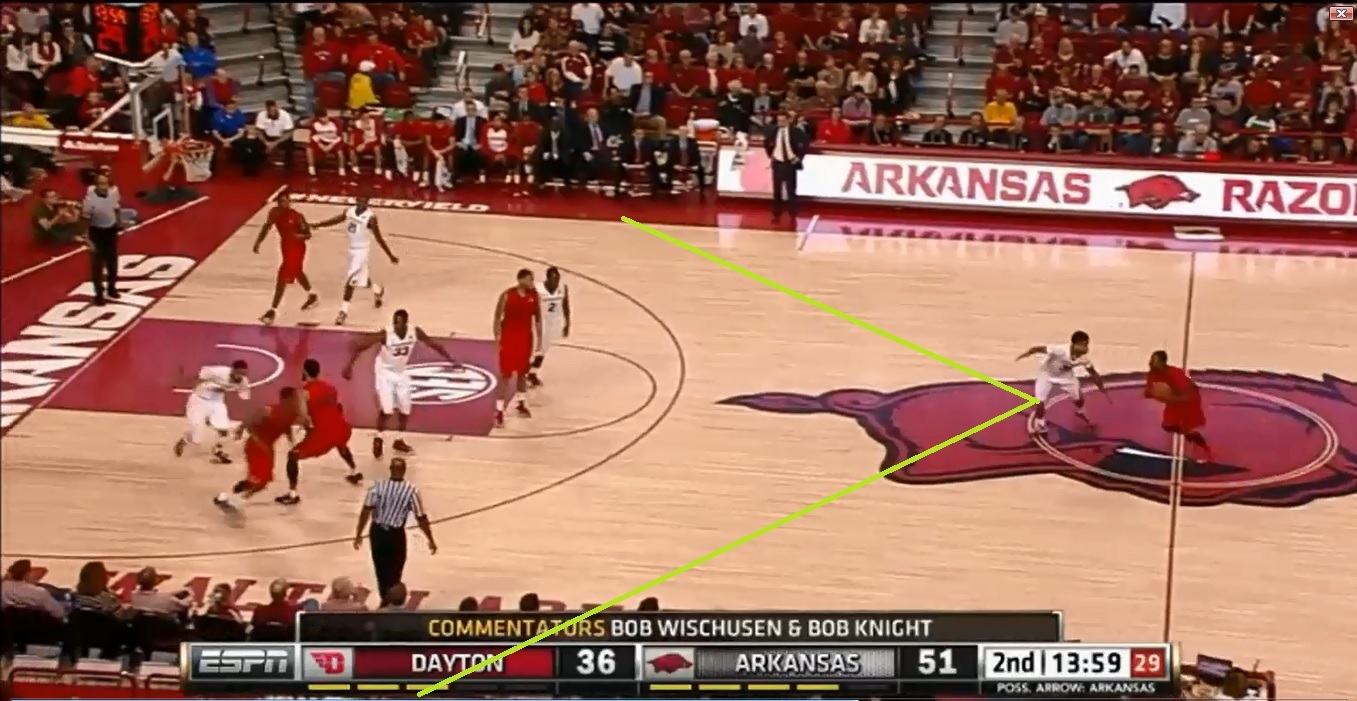 Beginning with on-the-ball defense, we blueprint how to implement pressure man-to-man defense into your program. The first concept, “THE ROOFTOP RULES”  is the foundation.

Not all man-to-man defenses are alike. Coaches have different philosophies on help defense, ball screen coverage, stance angle and much more. In this series we will detail the foundations of pressure man-to-man defense.

The obvious starting point in building a pressure man defense is on-the-ball defense. Stance is key. On the ball, defenders should be low and wide, an arms length away with their nose on the ball. The “drag hand” and “lead hand” concept is an important detail in on-the-ball defense. In the photo above, the on-the-ball defender has his left arm down and right arm out. The left hand is the drag hand. The drag hand should be down, extended and at a 45 degree angle between the legs. As the dribbler in this photo travels to his left, the defender’s drag hand is down to prevent the crossover dribble to the right hand.

The lead hand is out to his side and in the passing lane. It is there to make him harder to pass around and to get deflections. It also makes his wide side wider and harder to get around.

The green lines in the photo above represent the “rooftop” and provide a building block for pressure man defense. The rooftop provides players with a guideline for stance angle. The rooftop is not a tangible line that you could tape to floor, but rather a concept. Wherever the on-the-ball defender is on the floor, the rooftop is his/her guide to defensive stance angle.

The one constant of the rooftop is that it terminates at the point where the free throw line extended intersects with the sideline. These points are called checkpoints.  On-the-ball defenders on top should position themselves with their heels on the rooftop and angle themselves at whatever angle influences the ball handler to the sideline checkpoint.

Defenders should level off any attempts the ball handler makes to bust through the rooftop.

If a ball handler attempts to attack downhill and break through the rooftop, the on-the-ball defender pushes hard with their rear foot and reach steps with their lead foot to level off the drive and continue to influence the ball handler to the sideline checkpoint.

Two errors in stance to avoid are opening the gate and flattening out. Opening the gate simply means opening your stance wider than the angle of the rooftop. This gives the ball handler a direct line to bust through the rooftop. (See notes in photo below) In the photo below, the ball is at the very tip of the rooftop and the ball handler’s hips are square. Kansas guard Frank Mason has flattened his stance accordingly. As soon as the ball handler turns and angles his hips to one side or the other, Mason gets his heels on the rooftop, establishes a drag hand and lead hand and influences to the sideline checkpoint. This drill is the introductory drill for introducing the rooftop concept. Run it from different pick up points, but ideally in pressure man-to-man the half court line is the pick up point. In larger groups run this drill on both ends of the court simultaneously. Players should have proper stance angle, drag hand and lead hand placement and always forces the ball down or up the rooftop.

When introducing the drill keep the ball handler under strict rules to head down and up the rooftop. As your team masters the basics of angle, drag hand and lead hand you can allow offensive players to attempt the break through the rooftop using crossovers, reverse pivots and other dribble weapons.