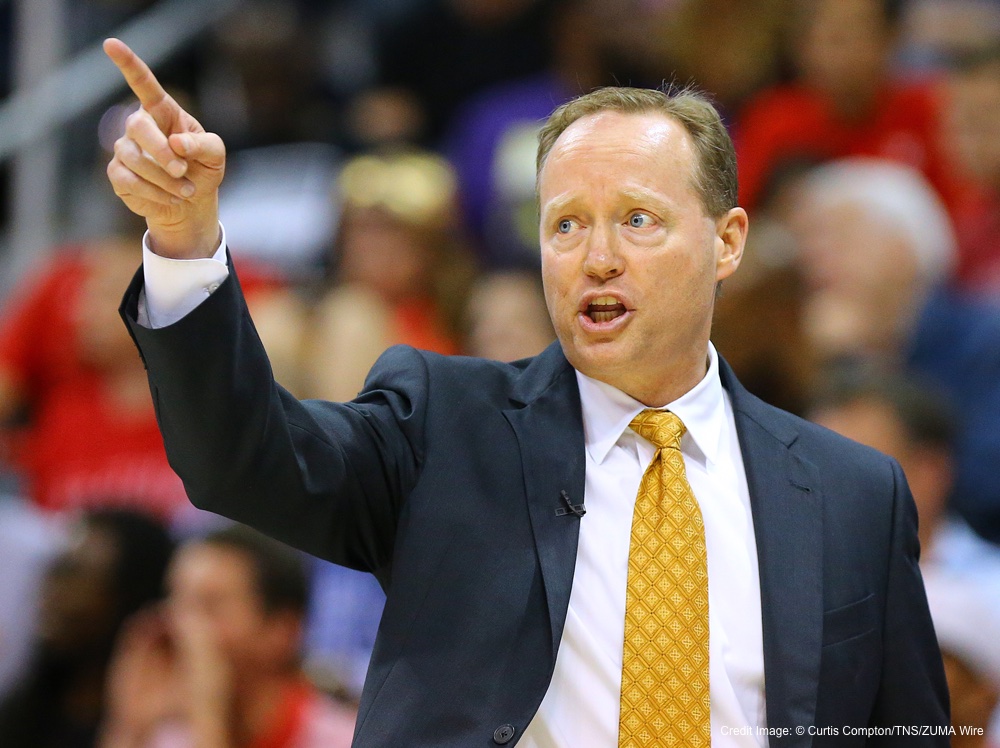 Coach Mike Budenholzer has a great playbook with a variety of plays for different situations. After a timeout in Game 1, he called a nice Elevator set for Kyle Korver, although it was covered well by the Wizards, they still got a decent look from the 3 point line. The set starts off in a Sideline out of Bounds situation and is triggered by the 4 man popping to the top of the key. The inbounder (point guard) sprints down toward the post, and v cuts back to the wing. Korver sets a cross screen for opposite wing and sprints through the elevator screen. The Houston Rockets have hurt teams alot this postseason by utilizing their power forwards as Pick & Roll ballhandlers and forcing the opponents two big men to both defend the Pick & Roll. They have used Josh Smith & Terrance Jones to create easy buckets against both the Mavericks and now the Clippers. They opened up Game 2 with this set and scored multiple times against the Mavericks. The Atlanta Hawks also utilized this set against the Wizards, getting an easy lob. This set was made famous by the Phoenix Suns 7 Seconds or Less offense, naming it “Elbow Get” as they utilized Diaw & Shawn Marion to score off of it often. Rockets get the ball to the power forward at the elbow (or lane line extended) and have Dwight Howard set a ballscreen and roll to the rim. The other set they utilize the 4 & 5 man in the Pick & Roll is in the post. They have a guard exit to the wing, enter the ball into the post and have Dwight Howard set a flare screen for the wing man. He then follows up and sets a post Pick & Roll for the 4 man in the post and rolls to the rim. David Blatt has been adding new sets almost every game this year with wrinkles off of them. A set that he has run all year with Kevin Love spacing was “Thumbs Down.” This set had the bigs cross low and Love would space to the corner, while other big set a high ballscreen for the ballhandler. This series against the Bulls they have ran similar action, only with the shooting guard setting a downscreen for the 5 man and pops to the wing, the big man sets a high ballscreen, in this case, for Kyrie Irving to attack. Another new set the Cavaliers have ran in the Chicago Bulls series has been a set that Doc Rivers ran with Rajon Rondo in Boston and now with Chris Paul in Los Angeles. With Tyronn Lue being an assistant and a main cog in the Cavs system this year, he added this set for Kyrie to get on the move and receive a dribble handoff and attack. The set starts with a pass to the wing and cuts through towards the rim. As Kyrie cuts through the ball is reversed to the top of the key and Kyrie cuts off a double screen from 2 & 4 into a dribble handoff from 5. Kyrie looks to attack initially and if he is stopped, 5 steps up and sets a spread ballscreen for 1. Doc Rivers and special situations have been a strength of his coaching pedigree since his days in Boston. He always has great action and movement to allow his players to get scoring opportunities, and late against the Rockets he ran a great Lob set. He has Jamaal Crawford run over top of a double screen toward the corner looking for the ball. As Crawford clears, Redick sets a backscreen on DeAndre Jordan who gets wide open for a lob. Video of all sets: