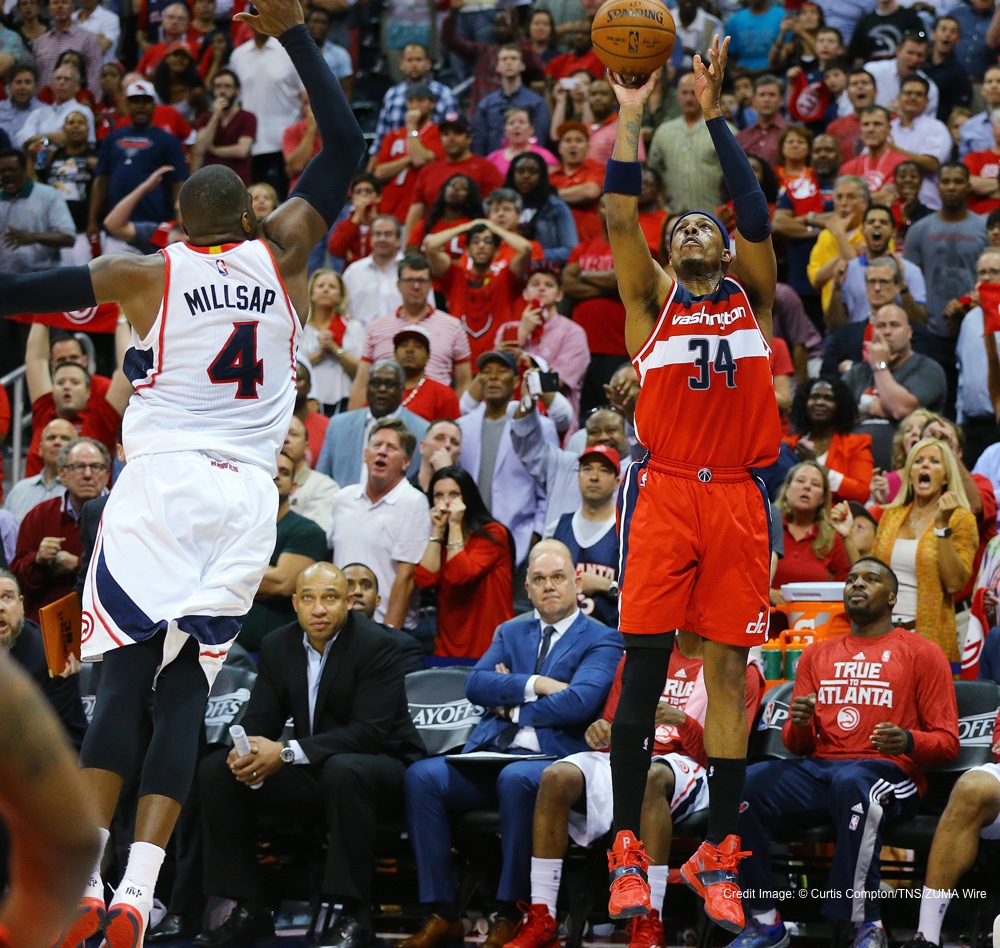 Click any diagram to open the play and FastTrade to your FastDraw Library!

Randy Wittman has turned heads this postseason with his late game sets & after time out play calls. He ran a great after time out set late against the Atlanta Hawks in Game 5 that allowed them to take the lead on a late Paul Pierce 3. Wittman utilized the Hammer set, made famous by the San Antonio Spurs, to have Beal drive after receiving the pass and having Gortat set the Hammer screen for Pierce to get open. With John Wall going down with an injury, the Wizards turned to Bradley Beal to be a facilitator and scorer in his absence. Wittman setup a nice set to create movement and to get Beal coming off a dribble handoff and get an open look. First Beal passes to the wing and then cuts off a UCLA screen from the big at the elbow, and then sits down in the post. The guard on the wing passes to the elbow and sets a down screen for Beal who then receives a dribble handoff from the big and looks to attack. Steve Kerr is always adding new sets for the Warriors, blending the perfect mix of new sets and older influences into this years Golden State Warriors offense. This year the Clippers have run a set called “Veer” for JJ Redick to get an open shot, a set which Kerr has added and run more this postseason. The set starts with a guard setting a down screen for the big man (typically Draymond Green) who then sprints up as if to set a ballscreen, this is a common action they run for a high pick & roll. Instead of setting a ballscreen, he veers off and sets a pindown screen for the weakside guard in the corner. Kerr has added some wrinkles to this set, where if the guard is overplayed (usually Klay Thompson) he then sprints across the court off a double screen. Golden State has the most lethal combination of guards in the NBA, and Kerr uses both of them to screen for each other often. He ran a great set in the regular season in which he had Steph Curry set a backscreen for another player who would cut to the rim. If that option was covered then Curry would cut off a dribble hand off from the big at the top of the key to attack.

In the playoffs, alot of teams attack mismatches, and Golden State has been no different. This postseason when the first option off the backscreen is covered, he had Klay Thompson & Harrison Barnes both post up against weaker opponent guarding them. Along the lines of Randy Wittman, Kerr likes to run the Hammer set to get his players open, and in true Kerr style he runs a nice counter out of this set. Having Mo Speights (stretch 5) set the Hammer screen knowing his defender would be prone to sag off and help, and then opens up for a jump shot. Struggling to score against Golden State in Game 5, Dave Joerger called a timeout and setup a nice “Blind Pig” set to get an easy score. Knowing that Golden State was playing aggressive and overhelping on any screen that a guard cut off of, he had Gasol flash to the high post after Conley exited the screen and received the ball. After he caught the ball, Conley cut backdoor with his man on the high side, and Gasol hit him with a nice backdoor pass for a floater.