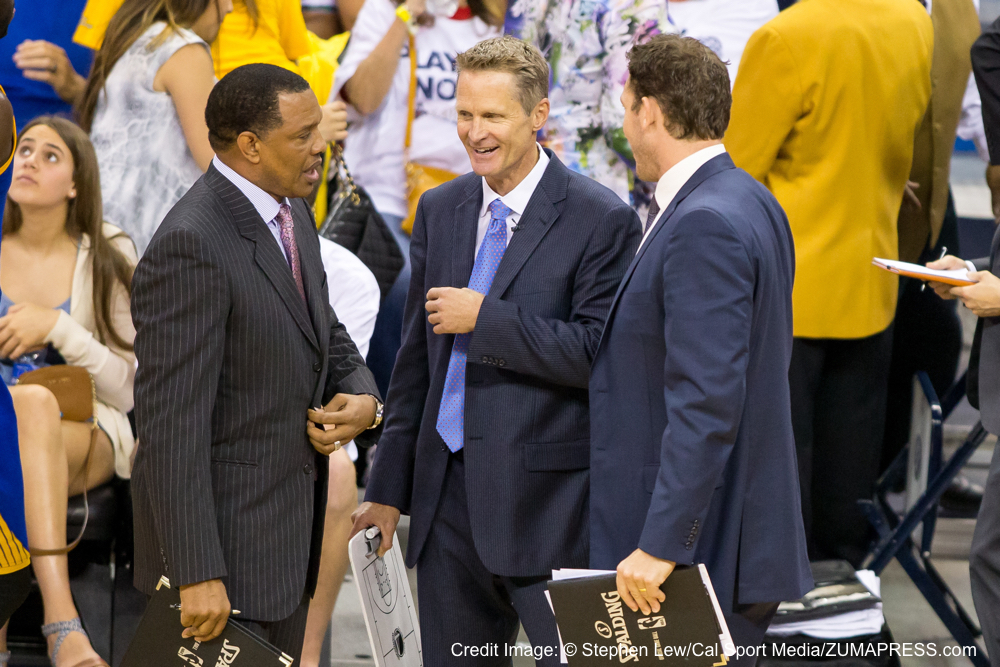 The NBA Finals are upon us, the Golden State Warriors vs Cleveland Cavaliers. The best minds in basketball are on display and Steve Kerr has quickly been able to join the coaching ranks as one of the best X’s & O’s coaches in the NBA.  Alot of what Golden State’s offense is based is what we call “reads” or “flow offense. This means that Kerr does not call plays or sets from the sideline slowing the offense down, but instead allows his players to simply play basketball within the built in concepts of the offense. This is not to say that Steve Kerr does not call plays, he just calls them when a stoppage or timeout is called to not interrupt the flow of the offense.

An adaptation from the Phoenix Suns 7 Seconds or Less offense, this is an early offensive attack that has been very effective for Golden State. The idea is to push the ball ahead as quickly as possible to the wing with a pass or dribble. There are built in options into this series, with an option to dribble hand off back to the point guard, keep it and come off ballscreen, and look opposite for weak side player coming off of the screen. A very common action among NBA teams is the Phoenix Drag, or in other words a ballscreen in transition before the defense can be set. They use this alot to get Steph attacking early in the offense to try and get easy scores. A big key to watch in this series is the way they run this ballscreen vs ICE defense. The Cavs ICE the ballscreens, or push the ballhandler to the sideline with two defenders, so the Warriors may try to have Draymond pop to the top of the key for a shot. Same concept as the regular Phoenix ballscreen, the main difference is that two big men set the ballscreen early in transition. The best part of this set is the counter they run out of it, the first big (typically Andrew Bogut) dives to the rim and the second big (typically Draymond Green) sets a pindown screen for Klay Thompson. The Warrriors also run another option out of this and that is to have Klay be a screener with a big man setting the double screen. After the guard comes off of this, the big man turns and sets a down screen for Klay to get a shot out of it. This is great action that flows directly out of their early offense and 21 series, with options for both Klay and Steph. The ball is pushed early with a pass just like 21, but instead the player receiving the first pass reverses the ball to the trailing big at the top of the key. After this Steph and Klay play off each other screening for one another and reading the defense. Whichever guard pops to the wing comes off a dribble hand off from the big, the other comes off double screen on opposite side. Kerr runs a couple of wrinkles out of this action, having Klay being a screener in the double screen and peeling off for a shot and another nice Elevator counter out of it. Steve Kerr has also used a lot of action that the San Antonio Spurs have run with their Motion Strong/Weak and he runs nice options out of this for quick hitters. The first option is a rub screen for Draymond (look for them pointing or hitting their elbow’s coming up the court to trigger this). They also run a quick pindown screen for Klay that they like to start each game with, as well as a lob set for Livingston. I think they will run the lob for Shaun Livingston as an entry or way to get him into the post, his matchup off the bench may be Matthew Dellevadova that he clearly will have a height advantage with. Golden State runs great action and their weave set has been very effective this postseason. It is a pretty standard weave and dribble hand off action, but look for Klay Thompson to attack early and reject the ballscreen from 5 and look to attack early to beat the defense. Steve Kerr’s go to after time out set in this year’s playoffs has been a nice backscreen set for Draymond Green to get a layup. Both Steph and Klay screen for each other (similar to their floppy action) one pops to the wing, the other sets the backscreen for Draymond. Steve Kerr has been my favorite coach to watch his actions all season after time outs and the playoffs have been no different. He runs great action here for a quick hitter shot, and a nice backdoor option. The biggest part of these sets is the fake dribble hand off to Steph at the top of the key, that fake freezes the big man’s defender and allows for a clean pass.