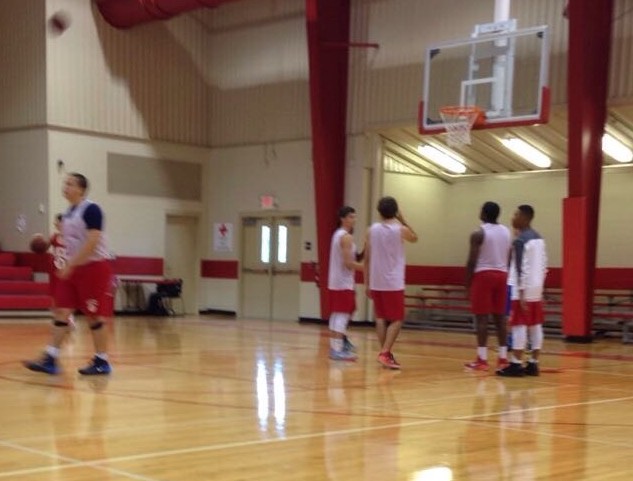 The morning got off to a faster start than I had originally planned. LSU Team Camp started today and the high school teams began competition at 10am. Unfortunately, I had to drive downtown to the Louisiana state police station to get my fingerprints taken for a camp later this month. Even though I arrived 10 minutes prior to the office opening, a line had already formed outside. Eventually, my name was called and I was out of the office around 8:45. Yesterday, I located a post office on the way to the courts and quickly mailed the fingerprinting information to the necessary address. I arrived at camp at 9:30 and was ready to go! I was very fortunate and appreciative to the LSU staff for being so understanding of my situation and allowing me to show up later than originally asked.

The sports complex that I was working at contained three basketball courts. As it turns out, my court was not being utilized for the first set of games. I helped out on another court by doing the book. For those unfamiliar, the book is where the score, fouls, timeouts, and everything else relating to the basketball game is written down. Once I shifted to my own court for the 11:00 game, I was responsible for both running the clock and the book. Although doing both simultaneously takes concentration, it is a very doable task.

Throughout the day, I worked 8 games and surprisingly they flew by. The team camp has 76 teams playing on 10 different courts. The competition varies from junior varsity to different competitive levels of varsity. This was clear to the naked eye as some teams were very good while others clearly had some work to do. The LSU staff did a great job of putting the teams in the divisions they belonged in and as a result, most games were very competitive right until the final horn.

The highlight of the day came in the evening during a high level varsity contest. A team from Jackson, Mississippi was in a full court man to man press. After creating a turnover, the 6’5″ sophomore attacked the basket and stuffed it right over the defender. I applaud the defense for trying to block the shot rather than surrender an easy two, but the player had no chance. At UNF, we call that, “ON HIS HEAD!!!” (I can hear you from Baton Rouge, Coach Taylor.)

The 2nd and final day of LSU Team Camp is tomorrow with the first games starting at 8am. Time to get some sleep!