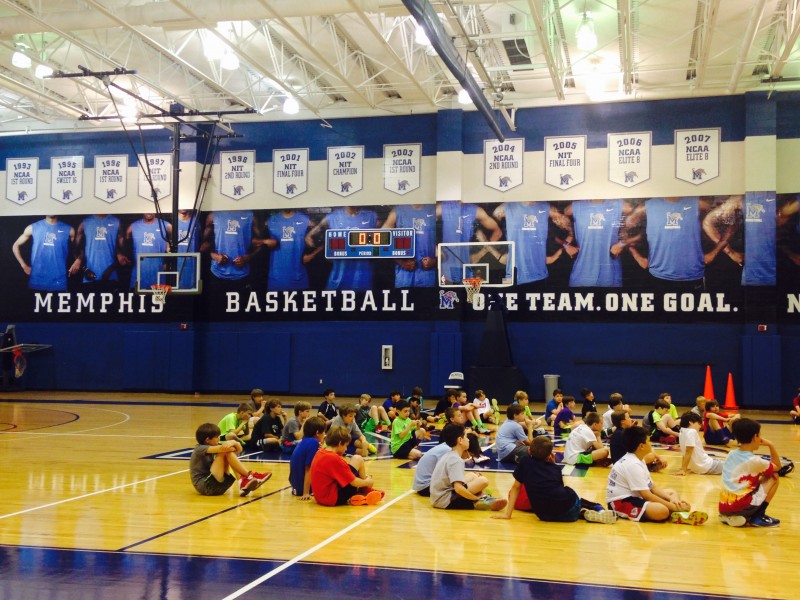 The first day of this week’s Josh Pastner Basketball Camp at the University of Memphis was this morning. Coaches were asked to arrive by 7:30a for a brief meeting before the campers showed up at 8a. The kids were allowed to shoot around until the official camp start time of 9a while registration was still taking place outside. There are 100 campers this week, which is broken into three age groups. Each age group had their own set of coaches and their own gym to use for the day. I was very excited when I was placed with the “NBA” as I enjoy working with the oldest kids at camp. These kids ranged from 12-16 and came hungry to learn. Typically, the older the campers, the more you can teach basketball. I much rather spend my time and the campers’ time instructing rather than handling behavior issues, which can be the case sometimes for the younger kids.

The morning started with the campers being introduced to the camp staff, camp rules, and the camp overview. Basically, camp director Coach Julian Swartz discussed the expectations for the upcoming week of camp. Following this talk, the other coaches and I took the NBA to our gym and divided the teams up randomly. We then chose our teams and I had the second pick. I didn’t get the one team I wanted and as it turns out, that is the best team in the league. The reason I wanted that team was for their big man who is about 6’2″ – 185 pounds. Although he is by far the best player in the league, I wanted the challenge of improving his inside game. It is one thing to dominate in a camp, especially playing with kids younger and less experience. When you play with kids your own age and size, it is a different game. With the second selection of four coaches, the Atlanta Hawks were ready to go to work!

I have determined that I either look like a great passer or just a really bad basketball player and they don’t know what station to give me. For the second consecutive camp, I have the passing station! Heads up to Kentucky camp up next: I can teach other skills too. Of course I didn’t mind passing as it is a very important component to the game; what a coincidence though. Anyhow, with older kids this week, I was able to work on passing drills while on the move rather than stationary fundamentals. The drill ended with the campers doing a 3 man weave. I have to say, I was impressed with the focus and ability of the kids to perform a drill we do at the college level.

The afternoon consisted of everyone’s favorite, 5 on 5 games. We played two different teams and lost both by one possession. You would think with the second choice of teams, I would end up with one of the better teams but that wasn’t the case. However, the games were close and after one day of camp, my team defends better than any of the other three. That’s a win in my books. Kids LOVE playing defense with their hands and fouling but teaching them how to stay in front of their man by moving their feet and keeping their hands off the offensive player is a fun challenge for me. Of course, I also discussed the importance of being a great teammate. One of my players got fouled on a drive and ended on the ground. I happened to be right next to him and as he was about to get up himself, I made him wait for his teammates to come over. That’s how the kids learn. It’s one thing to talk about it, but it’s another for them to actually hustle over and help their teammate up.

Camp ended at 4pm and I watched a couple Memphis players come into the gym to work on their game. Mandatory workouts are tomorrow and Thursday and Coach Pastner said we were all welcome to stick around and watch. I’m definitely looking forward to that as it is neat and a great learning experience to see how different programs go about their workouts and practices.

After a much needed nap, the camp coaches returned to the practice facility at 8pm for some pickup basketball. I made a huge push during camp for this to happen as I left LSU without playing once, I have to admit, I was a bit disappointed as I try to get a game organized at each camp I attend. Tonight, we played 3 on 3 and then full court 4 on 4 on the main floor. Unfortunately, we couldn’t get enough coaches to play a regulation game, but it was still a fun time. We are hoping to play 5 on 5 Wednesday night. Being able to bond with the other managers and camp staff while playing the game everyone loves is a ton of fun! We were at the practice facility until about 10:30 so my options of a late night dinner were limited. I drove through Wendy’s and I’m deeply regretting not ordering a frosty right about now!