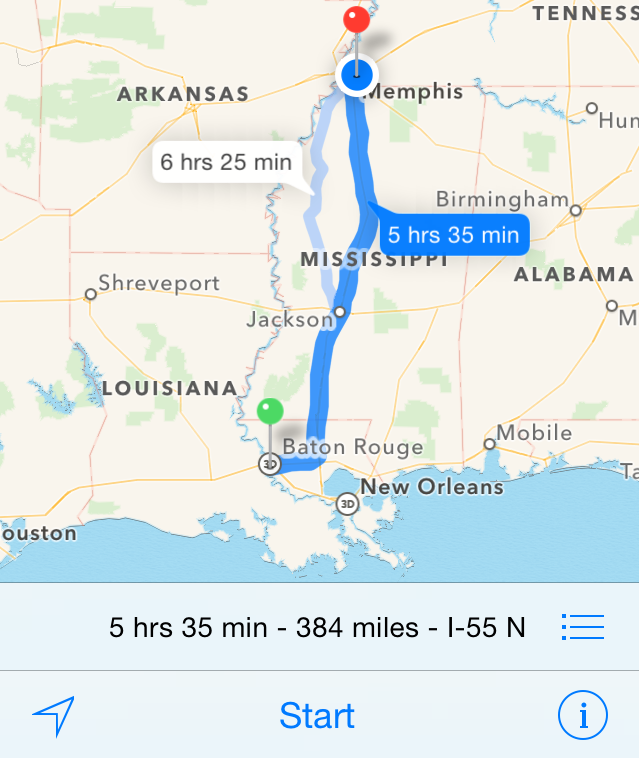 Today happened to be one of the two days off I have during the tour. In other words, I could sleep in and devote the entire day towards driving to my next destination; I definitely did both. Some drives between camps will have to take place overnight but as part of a famous Coach Driscoll quote, “…that’s just the way life works”. If you don’t know the rest of that quote, I suggest looking that up, it’s great!

The 5.5 hour drive would take me right through the state of Mississippi. However, one of the friends mentioned in yesterday’s post is now working in the state so I was able to stop by and check out campus. After getting a tour of the facilities and seeing a little of what the school offered, we were able to get a quick bite. It was great to catch up and hear some of the excitement in store for that program!

The rest of the drive was quite interesting. I ended up on some strange road for 45 miles. I don’t want to call it a highway because it was a 50mph speed limit with some serious twists and turns but I’m not exactly sure what it is referred to. For about 43 of the 45 miles, there was no service. I didn’t really know exactly where I was but fortunately my GPS did. And for those of you concerned about my gas tank situation, I made sure I had a full tank before going down that stretch. I didn’t see any places to fill up along the way, although I’m sure in a 45 mile stretch, there had to be a few.

Eventually, I arrived in Memphis, Tennessee and checked in to the dorms that I will be staying in. After moving all my belongings into the room, I noticed the door would not lock. Timing was very poor since it was the middle of game two, but I needed to handle the situation. The staff could not fix the lock so they moved me to a different room. All was taken care of and I was able to catch the 4th quarter and overtime period.

As promised earlier, I would share some stories and tips along this journey and today I wanted to blog just how I ended up at North Florida. I was a HUGE Florida Gator fan growing up; I mean big time! I bled orange and blue in all facets. My siblings were both students there, I loved Gator sports, and even my braces were orange and blue. If the Gators were playing on TV, I was watching the entire game. It didn’t matter if it was football, basketball, volleyball, softball, etc., I wasn’t moving. I had my heart set for the seven years prior that I would call Gainesville my home. When applying to universities, I went the in-state route, applying to Florida, Florida State, Central Florida, and North Florida. To be perfectly honest, that was probably the order of schools I wanted to attend, with the middle two being a toss-up. The University of Florida was the last of the four decisions to be announced and I had been accepted to the other three institutions. The bad news came on 2/10/12 at 5:09 p.m. It’s scary to think that I still know the exact time that I clicked refresh and saw “I’m sorry…”. I couldn’t even read anything after that. Not to sound like a total baby, but I was devastated and immediately engulfed in a lake of tears. I can’t even explain the feelings that went through me. I felt as if I had let the family name down. Calling my sister was the toughest phone call I made because I would have had one year in Gainesville with her. Knowing I had a familiar face just minutes away would have been nice for my transition to college. As my best friend’s dad told me right then and there “doors are going to open, just different doors than you expected.” I went back and forth between UCF and FSU as to where I would attend school. I knew a little bit about both institutions but had never seen the campuses. These were the toughest weeks I had ever encountered before some good news came from my high school basketball coach. North Florida basketball coaches would be coming to my high school to workout one of my teammates. The day Coach Driscoll and Coach Kennen arrived was the day I knew where I was going to college. I can’t even put into words how I felt, but I can say it was the greatest feeling in my 21 years of life. I spoke to Coach Kennen for 10 minutes prior to the workout and talked to Coach Driscoll for 10 minutes after the workout. I can’t remember exactly what was said, but I know I was sold on the program right then and there. It was a little strange but my best friend’s dad knew exactly what he was talking about. Getting rejected by my dream school was the best thing that ever happened to me. For the last three years, I have been living my dream and I couldn’t be more proud to be an Osprey!