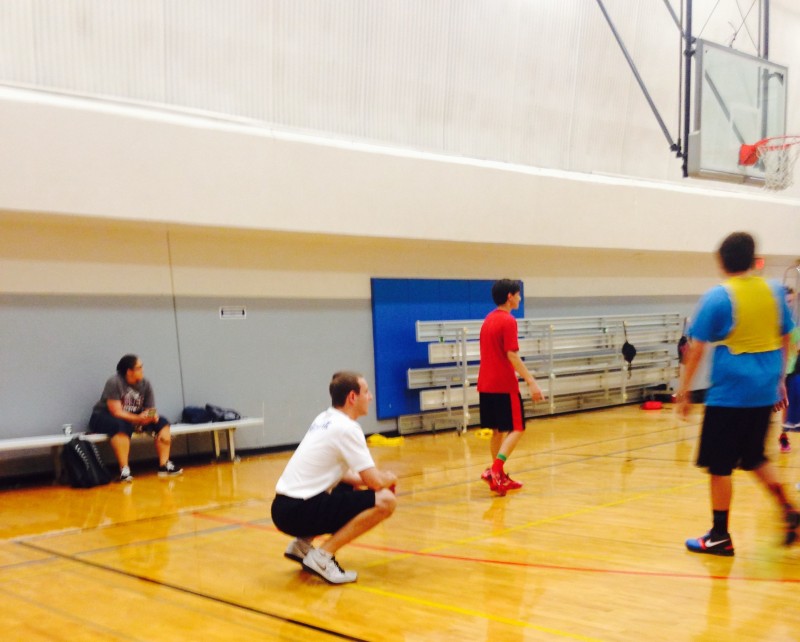 The all important 5 on 5 games got played today, as usual. I wonder what would happen if a day of camp went by without those games being played. Some campers actually ask in the mornings if 5 on 5 game will be played that day. In the many camps I have worked, the answer has been yes every single time. Anyhow, my team went 1-1 on the day, nearly knocking off the top team in the league. At the end of our 2nd game, which was five minutes before camp ended, I called all the players in on both teams. I hadn’t been as frustrated as I was at that point all summer. We won that game by 10, but so much unnecessary stuff occurred. I had to explain to the kids that if that had been a club, travel, high school, college, etc. team that I was coaching, I would have asked multiple kids to leave the gym. As terrible as that sounds, some kids need to be a little tougher. They complain about every call. And for my team, this comes after explaining that I am not going to call minor fouls. If hearing a whistle and your team getting an automatic two points is going to make up for the frustration of not being able to finish a layup through some contact, you can’t play for me. There was one kid on the opposite team that had a GREAT drive downhill, forced the big man’s defender to help, and made a pocket pass to his teammate. I mean it was GREAT. His teammate missed a wide open layup. The guard was so mad that he was about to cry on the court and walked back on defense while my team scored in transition. I stopped the game and had to remind myself that this was just camp. I was about go to bananas.

All I hope to get out of camp is to teach kids to defend and be the best teammate they can be. As I have said before, I don’t care about winning, I don’t care about minor fouls. In that group meeting, I was forced to be brutally honest and told the kids that the only talent I had in my high school days was effort. I couldn’t score, I really couldn’t defend, but I was always a great teammate and I was willing to put my body on the line for my team. The other thing any former coach of mine would agree with is that I was coachable. They were shocked at how bad I was (LOL) but explaining this to them helped get my message across. Coaches look for the whole package and if you aren’t going to play hard and be coachable, you won’t find yourself getting minutes at any level.

After camp, I was fortunate enough to watch the Memphis team go through workouts. Coach Pastner invited the camp coaches to stick around if they wanted to. I had my notebook out and my pens ready as today was a neat experience. As often as you can watch other programs workout and practice, I suggest doing so. No matter the level of ball, you can always pick things up by seeing how others go about their business.

I was incredibly impressed with Coach Damon Stoudamire. He took the time to talk to some “fans” prior to the workouts. I put that in quotes because I’m not 100% sure the relation they have to Damon or Memphis basketball but they were asking him some pretty in-depth questions. I couldn’t help myself but ask a question as well when he started talking about recruiting “sleepers”. For those unfamiliar, coach had a very successful NBA career, winning rookie of the year in the first of his 13 seasons. Even more impressive was his ability to coach once he stepped onto the floor. The man simply knows basketball.

I had been in Memphis for nearly 48 hours and hadn’t been for some BBQ yet. Fortunately, that changed tonight as another coach and I headed to Central BBQ. That place was serious. I ordered the pulled pork with sides of baked beans and mac & cheese. I’m not sure if we’ll have an opportunity to head back but it would certainly be worth it. Located just five minutes off campus, the place was packed with locals grabbing a quick bite.