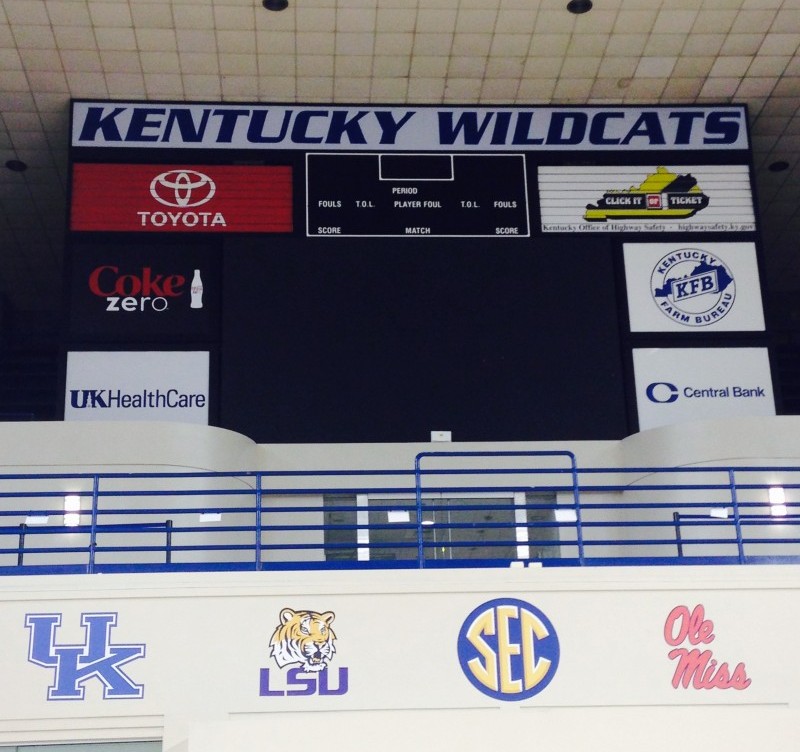 Today was the second and final day of the John Calipari Father/Son Camp. The experience is a short one but the duos had an absolute blast. It was so neat to see a gym of 600 people just having fun and bonding with each other. Prior to roll call in the morning, camp participants were shooting around, boxing each other out for rebounds. I found it so funny to see how the competitive nature of many fathers kicked in at different parts of camp.

My group was at the outside courts for the morning session. We started with stations and my assignment was once again ball handling. Instead of doing two ball dribbling, I switched it to one ball. We worked on crossovers, “Iversons”, and push-pull dribbles. Once again, seeing the father’s get low and trying to handle the rock while keeping their heads up and calling numbers was nothing short of comical. There is an even bigger emphasis on having fun than on a “regular” camp so the station always ends with some sort of game. We had relay races working on these new moves and each person had to finish with a made layup. Some fathers weren’t happy with the fact that I emphasized ‘made’ layup.

We had a long break for lunch as many duos used this time to also check out of the dorms. I was able to eat as well as relax at the room for a little, which doesn’t happen at most camps. The afternoon was filled with contests for the groups against one another. The free throw contest came down to the wire, with two groups tied at 9/20. A sudden death overtime period was required and then the four basket winners had a final, ultimately crowning a champion. That was pretty calm and straight forward but hot shot got really intense. Hot shot is a game where you have 60 seconds and are to accumulate as many points as possible. The scoring at UK is 2 points from the block, 3 points from the elbow, and 4 points from the top of the key. I had father’s complaining that people were cheating and weren’t shooting exactly on the spot as well as shooting from the same spot multiple times. I was actually embarrassed for them that they started making a scene but fortunately they remembered why they were at this camp: for their sons. All eventually acted like adults and the winner at my basket ended up being crowned the champion.

I really enjoyed this camp and seeing how the father’s worked alongside their sons on and off the court. It is a really neat concept that I would love for to expand to many other schools. Other than a few really competitive fathers at the end of the day, they were hilarious. Most of them had a great sense of humor and were extremely appreciative of our hard work. I would definitely work this camp again!

Fortunately, we were dismissed from camp at 4pm because I had some errands to run. The UPS Store closed at 5pm and I had to have a form notarized and mailed off. I eventually got to the store and took care of that with minimal issues. The form had to be mailed out ASAP to a camp I will be working later on during the tour. I then found a laundromat, which was much needed. I packed multiple bags of clothes, but on day 15, it was time to do some laundry. It happened to be a really nice laundromat and didn’t take more than an hour.

With the overnight camp starting tomorrow, the days will be longer and sleep will be a must when the day comes to a close. My roommate and I took advantage of the best night to explore Lexington and it was a really fun time. Seeing the different college towns while working camps completes the experience in my opinion. Not every atmosphere is the best with many students home during the summer, but Lexington didn’t disappoint.