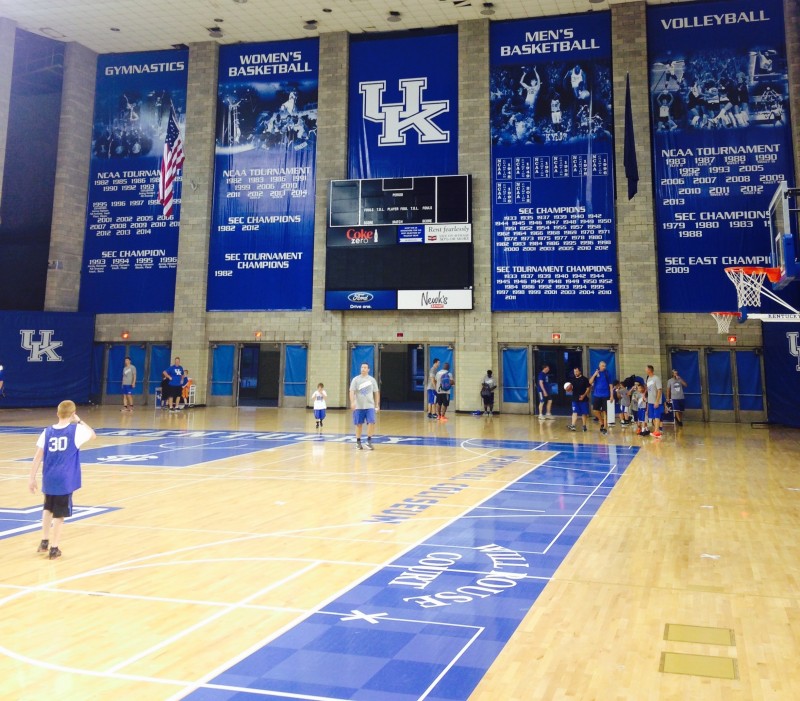 Having the morning to sleep in was nice and much needed for the challenges that lie ahead. The staff for the University of Kentucky Overnight Camp met at noon today. Soon after the details and schedule for the camp were discussed, campers were arriving for registration. This process lasted for the next few hours until all the overnight campers were checked into their rooms and the commuter campers showed up ready to play. The camp only offers the overnight option to campers 12 years of age and older. At 5:30pm, Coach Calipari opened up camp and we were off!

The camp was divided by age into five sub-groups. I was on the of eight coaches in the “Blue” group, with 8-10 year olds. Our first task was to divide the 75 kids into equal teams. I have found the best way to do this is by lining the campers up shortest to tallest. Going down the line giving each kid a number 1-8 in order will make the teams relatively similar in height and hopefully skill level. Of course you have those kids that want to play with their friends and it is important to try to accommodate those requests, although they sometimes become too difficult to satisfy everyone.

After all the campers were stretched out and loose, we began stations. We only had four goals for eight teams, so two teams were at each station along with two coaches teaching. Another coach and myself were given the shooting station. The campers got up a good amount of shots at the elbows and nail-hole, both off the catch and off the dribble. The rotation of stations lasted for about an hour before we had our first 5 on 5 games of the week.

The games tonight didn’t count for the overall records, but the kids still played as if they did. It was difficult at times coaching 8-10 year olds without any practice, but I was very impressed with how they picked up what was asked of them. As noted in previous blogs, I can’t stand when one kid takes 10 dribbles and his teammates are all standing there calling for the ball. Unfortunately, it happens often at this age but I did my best to encourage the campers to pass and cut as well as set ball screens. Not every possession was pretty but the ones where they passed to the wing and cut to the basket usually resulted in layups.

At the conclusion of the 5 on 5 games, it was approximately 8:30 and time for pick up. Since my group is all commuters, the parents were there watching the final few minutes of the games and signed their kids out immediately. My basketball responsibilities were done for the day and I would only need to do bed checks in the dorms. Those were easy as I knocked on each door at 11pm and made sure both campers were in the room. I reminded them that it would be wise to get some sleep as I will be knocking at 7am for breakfast. On that note, I need to get some rest myself as tomorrow will be a very long day!