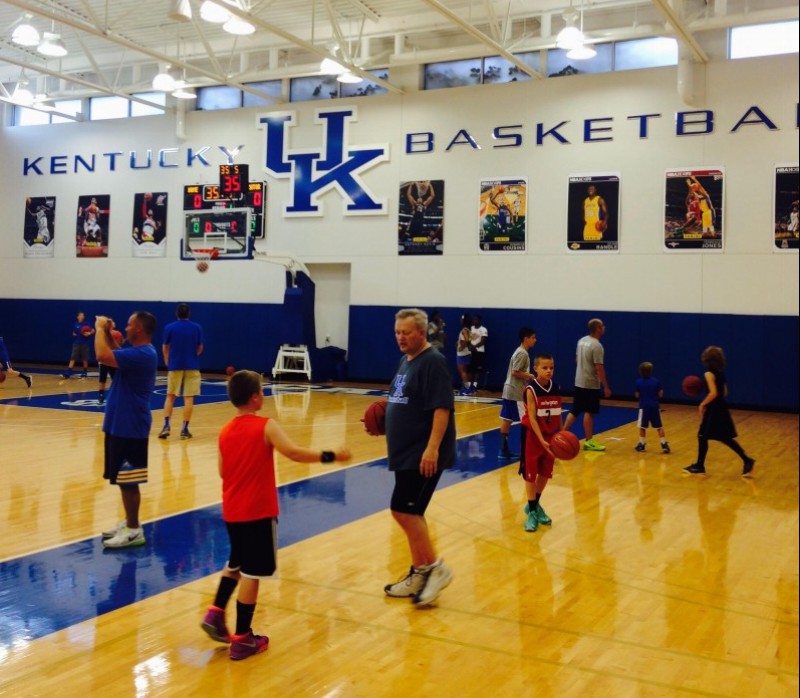 The morning got off to a very early start as I was on duty to wake the overnight campers at 7am for breakfast. I think the 5th of 8 alarms set was the one that got me up and moving and I was astonished by what I saw outside of my room. Most of the campers had not only woken themselves up but were also ready to leave. Breakfast is served from 7-8:30 but the campers wasted no time. Fortunately, the campers are old enough to go to breakfast on their own and I was able to get some more sleep before taking my morning shower. I caught the final few minutes of breakfast and departed to the gym for roll call.

As a result of so many campers, the camp utilizes different gym sites. For the morning session, my group had to bus over to the men’s practice facility. We added another coach this morning to the division and I was asked to switch from the shooting drill to the defensive station. Well, that is what they told me but maybe they saw me shooting around (LOL). We worked on closeouts with loud lips, low hips and high hands before switching to defensive slides. The morning session concluded with a free throw contest for the campers.

After lunch, we played “Wildcat Shooting”. This is a shooting game that was played during father/son camp as well and everyone absolutely loves it. I first learned the game last summer working UF camp and took it to my high school’s camp. The eight teams split into four goals, with two teams at each. Both teams form one line and shoot from the elbows. First team to five wins and the winning team advances to the next basket. The only way to score a point is to win the match-up at the “money basket”. These games get intense and the kids love it!

The first of three 5 on 5 game was played immediately afterwards. I was so disappointed in the lack of defensive effort as my team allowed 51 points in a 30 minute game. Keep in mind these are 8-10 year olds so missed layups happen frequently too. I really failed as the kids never knew who they were guarding. I give them the “freedom” to pick their man, which they handled well in the later games but for whatever reason, nobody defended one iota that game. It was a track meet with a basketball. Somehow, we outscored the other team by putting up 54. We had no business winning that contest, but the kids certainly took the win. As there were clearly no basketball highlights of that game since no defense was played, the highlight came on my teaching lesson halfway through the second half. Two campers ended up diving on the ball which forced a jump ball. Zero of the other eight players ran over to help them up so I stopped the game and made everyone do 3 push-ups. The rewarding part came frequently in later games when players were on the floor and teammates sprinted to help them up. Remember the two things you can control in the game of basketball, energy and effort. Put in the effort to be a great teammate.

I’m really lucky with the nine campers I have on my team. If you have ever worked camps before, you would agree that going 0-10 with kids that listen is a way better week than going 10-0 with campers that do exactly the opposite of what you ask. When I am not coaching, I have to ref the other games. My campers all stay seated in the area I ask them to and don’t cause any issues. At dinner, we all sit at one table and they help each other clean up afterwards. I have one 7 year old in my group and the others treat him so well, it’s actually neat to witness. After he spilled lemonade everywhere and started laughing, two of his teammates helped wipe the table and floor. My team just happened to finish the night 3-0, but I would definitely trade all those wins for these kids, even if they didn’t perform well on the basketball court.