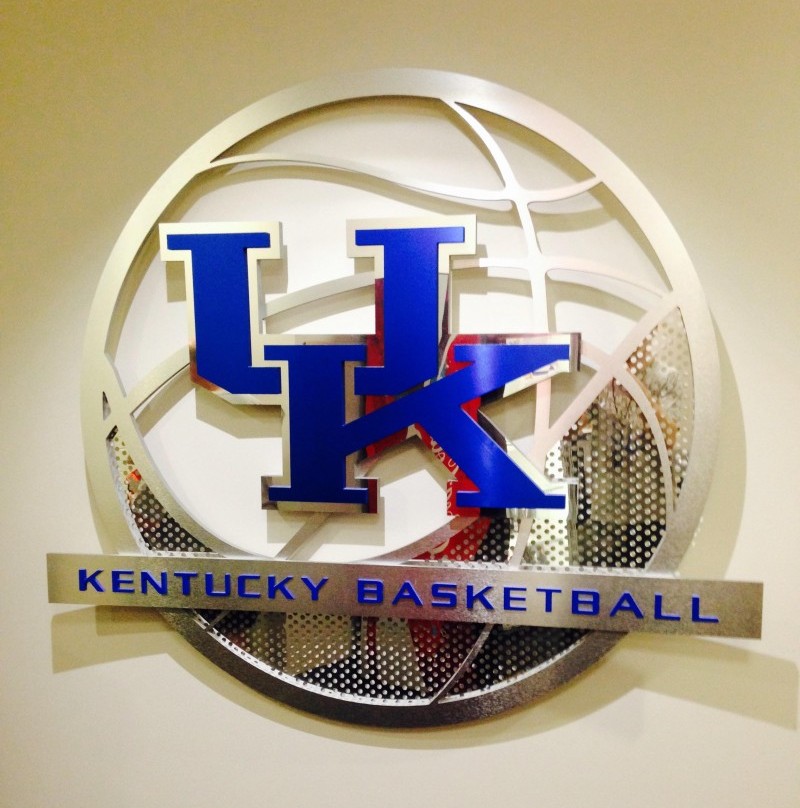 The final day of the John Calipari Overnight Basketball Camp had arrived. The morning started with our group being transported to the women’s practice facility. After stretching and getting loose, the kids played Wildcat Shooting. The quarterfinals of the single-elimination tournament also took place prior to lunch. Since we finished undefeated and locked up the #1 seed, we faced off with the winless #8 seed. The game was close up until halftime. Just like I mentioned yesterday, we would be eliminated quickly if we didn’t defend. The players caught their breathe at halftime and refocused to advance to the semi-finals comfortably. We left for lunch and I have to mention how great the transportation was all week. Not only was it very well organized, but they had pretty nice party buses taking us to the gym sites. I’m not sure that there is another camp in the country that does that.

The semi-final game was played right after the break for lunch. Our competitor was the #4 seed, who took us right down to the final horn in the first game of the week. The game was close and intense from start to finish. Not only were the coaches and players enthusiastic but the parents were as well, one particularly out of control. At the end of the day, this is camp, not AAU Basketball. The parents for the most part were around all week, literally setting up lawn chairs and blankets around the sidelines. I’ve never seen anything like it at a camp, but I’m assuming the large majority were from out of town and came for the whole experience. We were up by 3 with 10 seconds left and I wanted to foul SOOOO BADLY!!! I’m a huge believer in fouling in that situation but like I mentioned a few sentences ago, this is camp, not AAU Basketball. A player on the opposing team threw up a prayer at the buzzer that fell short, but there was some controversy whether he got fouled. The ref didn’t make the call and Kansas State had advanced to the championship.

The sidelines were packed as the championship game consisted of the two top seeds. I have to give a huge shout-out to a player on the other team that looks identical to Stephen Curry. I mean identical. I don’t even know his real name because everyone calls him Steph. The only thing he was missing was the mouth guard to chew on while at the line. The dude is a baller too and we couldn’t get a stop to start the game as he went to work. Fortunately we eventually settled down and defended before I got caught in a bad stretch. I do a fair substitution order, where each kid has a number 1-9. I play 1-5 to start the game and 6,7,8,9,1 play the next rotation. After that, 2,3,4,5,6 play. The bad news came when an injury affected the lineup and I got caught with a bad rotation in for nearly 5 minutes. We were a -7 in that stretch and that was only because we made a couple lucky shots. The game went back and forth and the kids become negative so quickly when things go wrong. Sometimes they will make a great play and a teammate will miss a wide open layup or they might not defend exactly how I ask but all week and all summer I harp to just make the next play. You can’t change that last play so refocus and don’t let it affect what is about to happen. My team was up by two with 30 second left and I was in another predicament. Once again, this is just camp so I didn’t want the kids to hold the ball. There are no free throws but rather automatic points on fouls so the other team can’t force us to hit free throws. Fortunately, we passed it around and hit a layup to seal the deal. THE CHAMPS ARE HERE!

My favorite part of the camp always comes when the kids thank me for the week and say bye. I don’t need a parent telling me how great I was because we won the championship or anything like that but when a kid looks me in the eyes and thanks me for learning how to defend that week, I know my job is done. On that note, I’m off to Cookeville, Tennessee this evening for Tennessee Tech Team Camp. I wrote this post a little early because I don’t know what’s in store once I get there and what the internet situation will be like. The drive is 3 hour and 15 minutes and it’s time to get on the road!