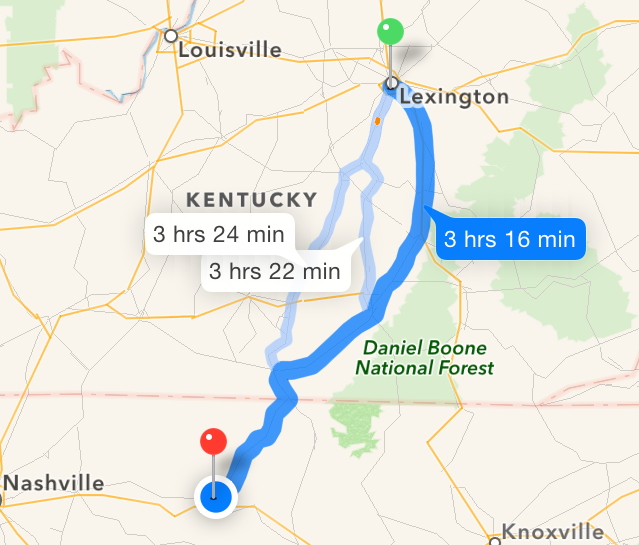 Since yesterday’s blog was written a bit early, I wanted to start today’s from where I left off. I completed the roughly 3.5 hour trip with only a pit stop to fill up the tank and get a drink. I tried for the final two hours to find something to eat, but I wasn’t willing to settle for McDonald’s or another fast food joint. Between not eating very well in Lexington and working my tail off, I felt as if I had earned a meal to sit down and be waited on. I stumbled across a Chili’s once I arrived at my final destination: Cookeville, Tennessee. After dinner, I headed to Tennessee Tech University to meet up with the staff and watch the final couple hours of team camp, day #1. I was very fortunate that I didn’t wait to write that blog because we were cleaning up the gyms and getting ready for day #2 until almost 1am.

That alarm went off early and often this morning. Finally I got into the shower and drove to Cookeville High School. My job for the day was pretty simple, officiate. This wasn’t a problem for me as refereeing basketball is my summer job at home, when not on The Camp Tour. I first became certified as a basketball referee three years ago and have been officiating for eight years. The games were pretty easy to work but there were a lot of them. Previously, the most games worked in one day for me was seven. Today, I ran up and down the court for 10 games. You could imagine how my legs feel right now. However, I’m so happy to be here and see some friends I made back when we had a home-and-home series with TTU this season.

I want to share something that I did that first initiated the relationships that I have made with Garrison Boyd (Former Student Manager), Mitchell Hill (Graduate Assistant), and Gus Fraley (Director of Basketball Operations). I want to write about my experience as I think it would be beneficial for any student manager reading this to take with them for next season. The first of two games against TTU last season was played at home in Jacksonville. Prior to their arrival, I contacted Coach Fraley. I told him who I was and that I would be assisting them for the duration of their stay. Our staff does a great job being visible and helping the opposition when they come into town (usually the day before) but I took the initiative to be the point of contact. This means that I am at the arena to greet the opposition upon arrival, around the arena during their practice in case they need absolutely anything, and there after they finish to put the basketballs away, close the lights, and do their laundry. In our league, it is a rule that the home team washes the visiting team’s gear. However, I always offer the opposition to take care of that, league game or not. When TTU showed up for shootaround the day of the game, I was there once again, before, during, and after. I was in constant communication with their staff asking if they needed anything whether it was directions, laundry, or even a place to eat. I’m not sharing this for a pat on the back but rather as a teaching lesson for young student managers who want to learn something new. I’m so lucky to be given the tasks and responsibilities I have at North Florida and over the last three years, those have continued to increase. However, when I see that I can take something off the plate of someone on staff and make their job easier, I either ask them or take the initiative to just do it! Coach Byron Taylor told me it is an assistant coach’s job to make the head coach’s job easier and after processing that, I decided it was a manager’s job to make an assistant’s job easier. If I take one task of each staff member’s to do list every day that might open up their schedule by 20 minutes to watch more film, get in an extra workout, or maybe call a recruit. I hope I got the point across that if you want to learn and grow as a student manager, sometimes you need to put yourself out there and take initiative.

Day 2 of TTU Team Camp is in the books and the finale is tomorrow. Coach Fraley and Coach Hill have done an amazing job organizing this camp of 90 teams across 13 gym sites. We might have been up until 1am cleaning up yesterday, but I know they were up even later finalizing every last detail. Then, the day comes and things happen. That’s when you have to M&A (S/O Coach Taylor), monitor and adjust. They did a fantastic job and it is neat to be around such a well-organized event. I also want to congratulate Garrison Boyd on his recently accepted position of Graduate Assistant at West Alabama. Proud to call you a friend!