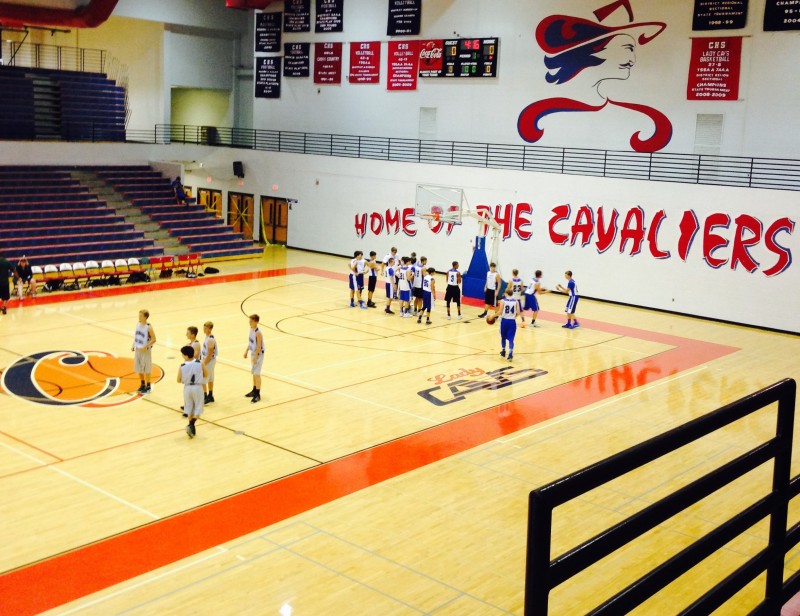 The final day of Steve Payne Team Camp had arrived and we were off to yet another early start. Fortunately, only 6 games to ref were on the schedule as my legs felt like string beans this morning. Nature Valley granola bars were eaten for breakfast and I used Olive Garden for lunch as motivation to get through the games. Of all 16 games I worked, I really only had a couple upset coaches and I have to say I was disappointed. When you are knocking out game after game, some enthusiastic coaches and parents complaining keep things entertaining. I felt as if a lot of the kids and coaches were just “going through the motions”. I understand the coaches being more laid back than the regular season and using the summer to evaluate but the players should be as intense if not more intense. In the summer of 2009, I used team camp to earn a jersey!

For those of you that don’t know my story but have been reading my blog, you have picked up on the fact that I wasn’t the most skilled high school basketball player around. I was cut from middle school in 6th, 7th, and 8th grade. I was cut from the JV team in 9th grade. Most other kids would have quit at some point during that stretch, but it only made me stronger. I finally realized that talent wasn’t going to get my name on a roster, so I did everything nobody else wanted to do. I took charges, I was the first to the floor on every 50/50 ball, and I used my basketball IQ to outsmart my opposition.

Six summers ago came my opportunity at the Embry-Riddle Team Camp. Since there were so many players interested in playing for the JV team, coach decided to bring 2 teams. At no surprise, I was placed on the “B” team. The first game of that weekend was played in a local church and the performance is still talked about today. I think I had 17 points but the staff talks it up to 25; more importantly the team got a win. The game was against Circle Christian High School and the “crowd” or “A team” was chanting my name at the end of the first quarter. I felt on top of the world and knew my hard work was starting to show. I took somewhere between 4-6 charges and played my tail off. The next game I drew another handful of charges, this time in front of the varsity coach. I’ll never forget that the staff came over to me and told me at that point, I had earned my jersey for the following year. That was a great moment as it was the first time of three (I played varsity as a junior and senior) that my name would appear after the final cuts were posted. My high school career began at a team camp just like this one and I would have liked to see some guys at the end of benches taking every opportunity possible to make a case for themselves.

The greatest part of the day was that after officiating and cleaning up, I would have some time to relax. If you have been following my journey closely, you would know this is a non-stop experience. Along with the Tennessee Tech managers, I headed to dinner at Cheddar’s. Following the meal, a few of us gathered at one apartment for FIFA. It was nice to sit down and relax but it was even better to do it with friends. I had a great time at Tennessee Tech and a 7+ hour drive to Raleigh, NC is in store for me tomorrow.