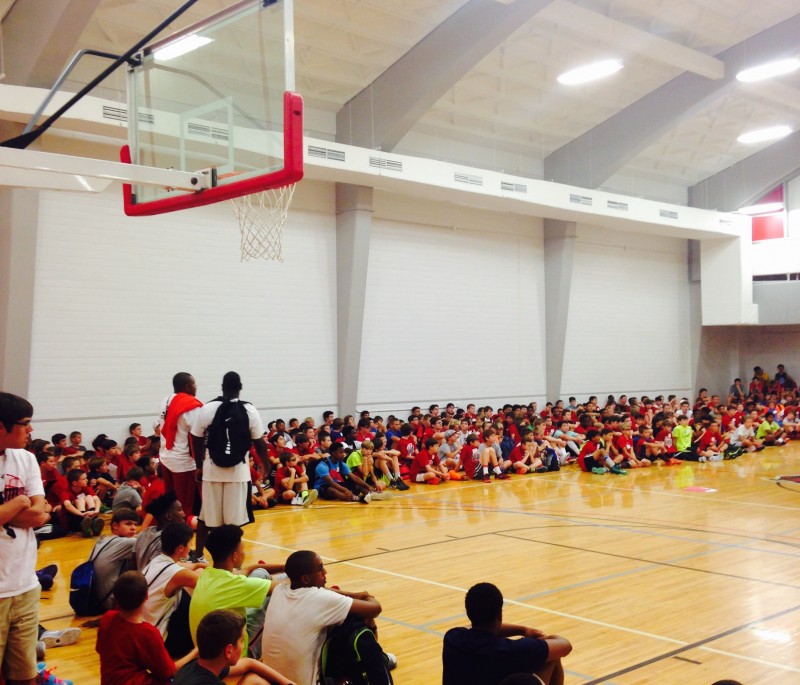 I want to open today’s blog by wishing all the dads a Happy Father’s Day! Dad, I know you’ve settled into being my 2nd biggest fan as mom would be upset if she wasn’t #1. Thank you for everything you have taught me as I wouldn’t be the man I am today without your love and guidance.

A special shoutout to Coach Driscoll, who sits at the top of the leaderboard for the most comments as well as the best comments for the blog. To answer his most recent questions…
Total Miles Driven: 2,600
Total Gas Money: A LOT
Total States Visited: 8
Total Dunkin’ Donuts: 0 (uh oh…)

The morning was off to the usual early start. I grabbed a quick bite at the hotel’s continental breakfast before heading to the Dail Center for an 8am staff meeting. The meeting basically took us into registration, with the first campers checking in at 11. My job for the following two hours was to be around the main parking lot and answer questions/direct people to where they needed to go. Truthfully, I wasn’t the best person for this job as I knew 0 answers; I just arrived on the campus for the first time three hours prior. After a few questions in which we didn’t know what to say and standing in the blazing heat for five minutes, another coach and I moved to the registration exit door and figured how we could be of assistance. We reminded each family leaving that they needed to check into the dorms for the overnight campers as well as directing them to the gym for a parents meeting. It was pretty neat that I was paired with Nate Laing, who happened to be the first person I conversed with this morning. His dad was the head coach at Campbell for 10 years and one of our assistant coaches at UNF, Coach Bobby Kennen, was on that Campbell staff. It’s a small world.

Once camp got underway, the kids were divided by age group. I was assigned to the “NBA” with 11-12 year olds. My camp philosophy is pretty simple: the older the kids, the more teaching I can do and less babysitting. I wan’t to have an impact on each and every kid whether it is making them a better basketball player, better teammate, or better person. Although I didn’t have the oldest age group, I was happy to have older kids than I did last week. We lined the kids up by height and split them into 18 teams. Yes, there are almost 175 kids just in that age group and 366 total campers. We spent the next few hours simply evaluating; the campers went through drills, 3 on 3, and 5 on 5 as we watched with one goal in mind: make the teams as even as possible. I liked what the NC State staff did as they assigned us each a team early on but told us that wouldn’t be our team for the week. They did this and encouraged us to make as many trades as possible to make the teams balanced. After evaluations were done, they assigned us to a new team at random.

You can usually tell what kind of team you are going to have just by completing your team roster. At every camp, it is typical to write down each campers’ first and last name as well as a contact number. The kids that are going to cause problems don’t wait and try and trick you but rather start misbehaving immediately. I set the ground rules right after I saw some issues and told them I was with 8-10 year olds last week. I wasn’t trying to babysit this week but rather help them become better basketball players. We stepped onto the court after dinner for our first 5 on 5 game, although I believe it was technically an exhibition. I had this new team for a grand total of 10 minutes and I had no idea how good or bad my team was. It turned out that I had 10 players and coming from UK camp, the two platoons would be utilized for substitutions. I tried to make the two groups as balanced as possible but I was really just judging a book by its cover, exactly what they teach you not to do. I had no other option at that point.

Things turned sour very quickly. Just a few minutes into the contest, our team (Atlanta Hawks) was trailing 14-4. The situation was worse than what the score portrayed. My team was hopeless on offense and couldn’t stay in front of their man defensively. At this camp, they grant you two timeouts per game. I called my first at that point and sat all 10 guys on our bench. Half of them looked like they were going to cry and the other half didn’t even want to look at me. I let them know right then and there that they had two options: they were either going to take my coaching or I would trade them immediately. I really have no problem if you are at camp because your parent’s force you out of the house or you just want a fun experience but I expect you to do one thing and that is to listen. If you are coachable and give me your best effort, then that’s all I can ask for. It’s amazing that at the end of the game, those 6-7 players that for sure wanted to be traded mid-game but didn’t have the courage to say so no longer wanted to be traded. We won by 4 as we somehow learned to defend. I was dripping sweat by the end. As you all know, I don’t care about wins and losses but you won’t find a camp coach more enthusiastic and into the games than I am. It’s a weird combination because typically the ones that actually coach their campers are the ones that want to win but for me, I’m just very passionate and love teaching the game. One of my favorite parts in the game came when a sub for the other team was literally yelling for 5 minutes straight at me to get back into my coaching box. Sorry man, but I was on the other side of half court encouraging my guys to get in a stance and move their feet. I teach the kids the same things at every camp and it’s amazing how such basic ideas work. The concept of passing and cutting to the basket is the easiest thing in the world, but every kid would prefer to pass the ball to player B and then stand there and scream player B’s name until they pass it back. I’m excited for day 2 as I’ll learn which players truly want to be coached and which guys are just here for a good time!