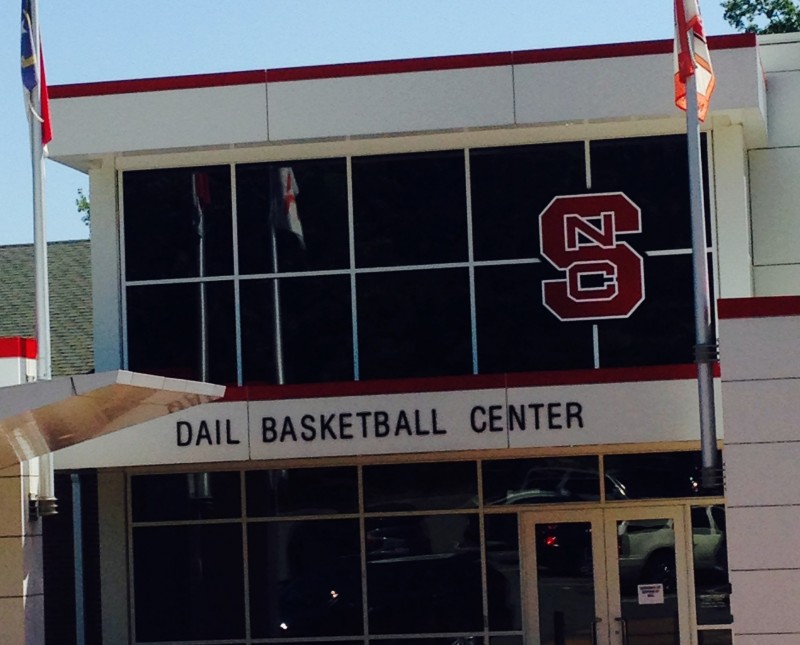 The 6:55am alarm was set once again for the morning craziness. Whistles were blown early and often as I paced down the hallway on the fourth floor. Amazingly, some kids came out laughing while I’m sure others tried to sleep through it. Even if some tried, I assure you they were unsuccessful. After walking over to the main gym, Coach Gottfried ran a rebounding clinic for the campers. He covered offensive rebounding/finishing as well as defensive rebounding/outlets, both things that were taught in our station yesterday. Just like every coach in America, he preached two hands, two hands, two hands. At our station today, we worked in greater detail on offensive rebounding and finishing around the basket. The kids enjoyed it because they were able to shoot the ball, but we encouraged proper technique and footwork.

After a break for lunch, we returned to the gym for the 1 on 1 competition. It is very similar to King of The Court. In this format, the offensive player only has three dribbles and must score on the first shot attempt to stay on. The three dribble rule is a great one because it teaches the campers to play North and South rather than East and West. As we transitioned into the 5 on 5 games, I knew we were in bad shape. Campers were arguing with each other in warm-ups and not running the plays properly that I asked them to practice. Just as I predicted, this translated over to the game and we suffered tremendously. It was only a 4 point deficit at halftime but that increased in the 2nd half. Nothing is more frustrating for a coach than losing every single 50/50 ball. I can deal with missed shots but lack of effort is something I simply don’t tolerate.

Shortly after returning to the courts following dinner, the evening games were underway. The way it works is half the teams play while the other half watch. For the staff, you are either coaching your team or officiating if your team is not playing. My team had the second game and by the time the 1-2 Hawks took the floor, a small crowd of parents had formed. Better yet, I agreed to terms with Terry Henderson to join the staff as an assistant coach. The NC State player was absolutely incredible with the kids. It is neat for them to have a player sit on our bench but the way he interacted and helped coach the kids was awesome! (He even set up “Four Corners” to run out the clock in the final minute) Maybe it was Terry’s presence, but the kids came out to play right away. Instead of going down 10 early, we started the game on a 10-0 run. The ball was picked up at half court every possession and the campers suddenly remembered the offensive sets. It was unreal how magically everything came back together. One of the refs asked how the team wasn’t undefeated; I laughed. My favorite moment in the game came when I called for “box” to be run. The first couple times it was ran incorrectly but I had discussed it with them at the previous stoppage of play. I might have been at half court with a bigger fist pump than Tiger Woods when he won the 2005 Masters when the play was executed and we scored a wide open layup. Usually at the camp level, one screen is enough to get open. When you run screen the screener action, it’s guaranteed to work. Getting your kids to be in the proper spot is the only obstacle in having success. The highlight of the game, believe it or not, wasn’t even that play but rather what happened a few minutes later. I am very passionate and enthusiastic on the sidelines and for whatever reason, I decided to relax just a little. I leaned on a table to catch my breath and I guess I leaned too hard. The table collapsed, the clock fell, and I went tumbling. How less than 10 people saw this embarrassment is beyond me but sometimes you just have to laugh at yourself. The loud bang occurred and I was flat on the floor dying of laughter. In the end, the 2-2 Hawks earned the 11 seed of 18 in the single-elimination bracket tomorrow.

After camp concluded, we met as a staff to discuss tomorrow’s events. In addition to the awards such as Mr. Hustle, MVP, and Coach’s award, each camper will receive an evaluation. Basically, we are asked to grade each of our players in the categories such as on-ball defense, court vision, rebounding, and being coachable. If you have read any blogs up to this point, you would know that last category is my favorite and the most crucial. To no surprise, every single one of my campers received an excellent grade in being coachable. They did a great job listening and executing to the best of their ability.

I also want to mention what a great job Jeff Dunlap (Director of Operations) and Ben Asher (Graduate Assistant) have done putting on this camp. It is not easy running a camp with almost 400 kids and they have done an outstanding job being organized and running a smooth operation. Of course things are going to happen that you can’t plan for, but from there it is all about M&A, monitor and adjust. Huge congrats to Ben Asher on his new gig at Siena, Director of Basketball Operations. They made a great hire!