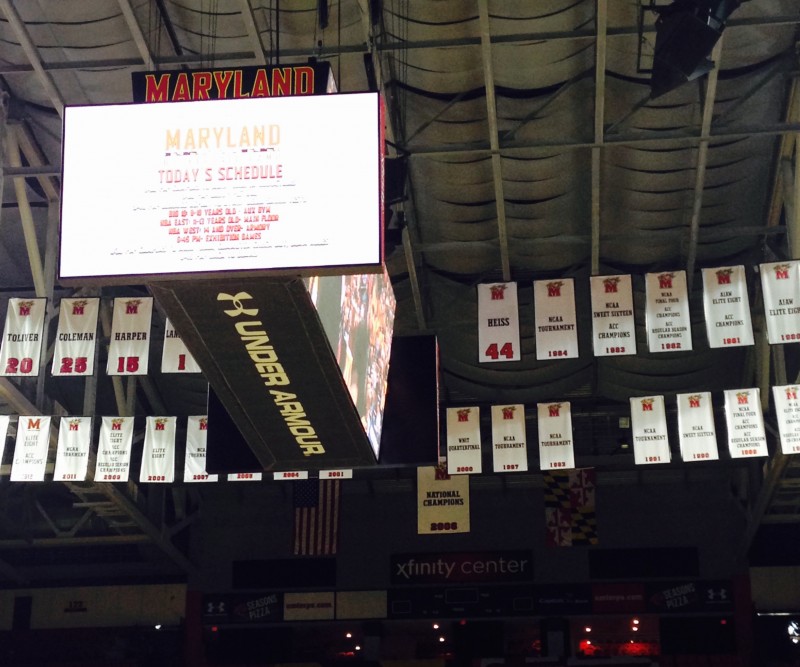 The staff meeting for Maryland Basketball Camp was not until 1pm and I took full advantage of that. I was able to catch up on some much needed sleep by not having an alarm go off until 9:30am. It took me 30 minutes to drive under 10 miles, but I was able to meet Chris Ramos, a former FGCU manager, at Chipotle for lunch. He is now living in the D.C. area working with Team Takeover, an elite basketball program. I met Chris this past season and couldn’t be happier to see him following his dreams!

I arrived at the Maryland campus 30 minutes early as I always leave ample time in case things don’t go as planned. It was very fortunate that I did this because construction caused a couple detours and I had trouble getting to the arena. Upon arriving to the meeting, Coach Nima Omidvar, Director of Basketball Operations, gave me a good laugh while he was taking attendance. He came right out and told everyone I was the “World Tour Guy”. After asking me what number camp this was for me and I said 8 of 9, the other coaches were in awe. Most of them just finished working this past Maryland camp and some were exhausted at the start of camp #2. An interesting part about going from camp to camp is how refreshed I feel on the first day at each new spot. Yesterday, I was dead tired after finishing up at NC State, but today I felt great as I arrived in College Park, Maryland.

The campers arrived between 3-5 for registration and each camp coach was assigned a responsibility for this process. I was asked to assist the trainers with paperwork but they told me that they would be able to handle everything between the two of them. I jumped over to the picture area and helped out a friend I made working at NC State camp. I had no idea he too was coming to College Park. The campers were able to take a picture with the Maryland players as they were decked out in some neat Under Armour jerseys.

Once camp began and the staff was introduced, we split into our assigned age groups. I was put with the Big 10, which consisted of 8-10 year olds. To be perfectly honest, I wasn’t initially thrilled about it but the two guys in charge of the age group are absolutely hilarious. They have been working this camp for years and both work in the education field. As it turns out, we had 6 coaches for 22 kids and the other age groups were short a couple coaches. They asked two of us to switch groups and typically I would be the first to raise my hand. I like working with the oldest kids possible because that is where I can do the most teaching and the least amount of babysitting. I can’t believe it but I actually thought about staying because of the amount of fun I knew I would have with that staff. In the end, I decided to jump age groups starting tomorrow morning.

After walking back to the dorms, the campers were able to purchase pizza, drinks, and snacks at the camp store. Just like at NC State, they take care of the coaches and supply pizza at no cost. Right after walking up and down the halls for room checks, we met as a staff and discussed the agenda for tomorrow. Bits and pieces of the NBA Draft have been watched, but truthfully I just want to get some rest.