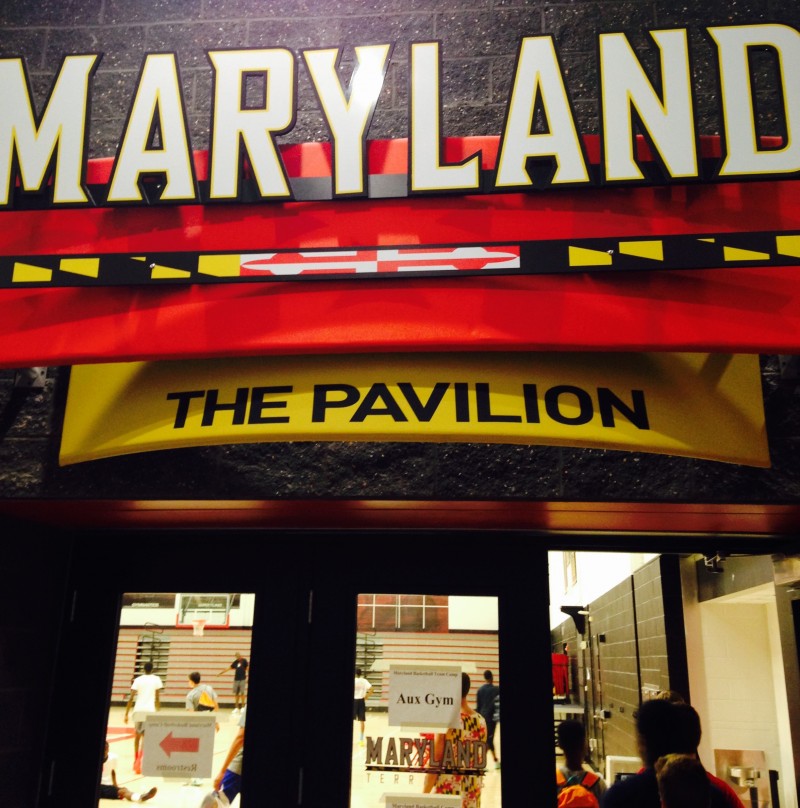 I apologize for any spelling or grammar mistakes as I used the voice recognition to “type” this blog. I hope all mistakes were fixed but with no wifi, I had to be creative rather than just typing it up. (enter the fantastic #TeamFastModel Editors)

The campers were woken up at 7:45 and we met downstairs shortly after for breakfast. After we finished eating everybody, walked over to the Xfinity Center for the morning stretch. Today, it was led by Coach Cliff Warren. The noteworthy part about that is that two years ago, Coach Warren was the head coach at UNF’s crosstown rival, Jacksonville University. He is now an assistant coach for the Terps. Prior to playing our first set of games, the 100 campers were divided into 10 teams. It just so happens to be that I was told three of the worst players in the league were on my team. If you read yesterday’s blog I mentioned how last night served as the evaluation period but I was not yet with this age group. The coaches got a good laugh but we decided to wait and let the kids play before making any trades.

It was about 15 minutes into my first game when the league office placed a call to me (not literally). My team was down 25 points right off the bat and a trade occurred with the team I was playing. The game was paused to trade one of my least experienced players for the other teams third or fourth best player. It’s amazing how the rest of the game was even and I knew I got a great player. As it turns out he is a top-five player in the league of 100 kids when he is aggressive and takes the ball to the hole. The camper is 17 years old and is built like an ox. However when he settles for mid range pull-ups he shoots about 10% and isn’t a top-five player on just my team. Therefore, I encourage him to be aggressive every single possession. I don’t know why he doesn’t realize this on his own as he is unguardable in the paint.

On day 1, the entire camp learned the “camp offense”. Each coach was instructed to teach the same half-court set, which I thought was a great idea. I had never seen this before but it is amazing how much smoother and more organized the 5 on 5 games were. The set begins with the ball handler at the top the key, 2 wings and 2 players on the blocks. The two wings down screen and from there it varies by coach. Sometimes, my team will cross screen while other times it sets a stagger screen on the weak side. Either way, it helps the game flow rather than just coming down and playing 1 on 1 off zero passes.

The second game was much more competitive. The back-and-forth contest was flowing right up until the last rotation. As it turns out, half my team became friends with the trainer as they dealt with cramps, rolled ankles, and tweaked hamstrings. The bench shrunk and minutes increased for everyone else, but that was a factor down the stretch. We had a six point lead with one minute to play and we absolutely blew it. I don’t really believe in holding the ball or stalling in camp so I called for the camp offense to be run. The defender jumped the passing lane and laid the ball in to tie the game with 5 seconds remaining. TIME AND SCORE!!!! You always need to know both. A player on the other team thought they were still down 1 so he intentionally fouled my player with two seconds remaining. I didn’t want to call the foul and have our first win come like that but fortunately the other ref did. My player headed to the line for 1 and 1 but missed the front end. The rebounder stepped out of bounds after corralling the board and we had 1 second remaining on the clock with a chance to win. The inbounder faked a pass to the middle, drew extra attention, and passed the ball to the short corner, where my player nailed a 15-footer. Ball game.

The final game of the night came after dinner and the players were absolutely exhausted. Maybe I should re-word that and say the players and their coach were absolutely exhausted. I’m actually writing this post this morning because I tried to write it last night following the staff meeting and room checks but I fell asleep with the computer on my lap, only one paragraph in. Day 28 man. I still found it in me to give it everything I had as the final game of the night would complete day two in College Park because these campers deserve my best effort from start to finish. We ended up losing the game but I was really tough on my players. I coach these kids at every camp as if they are on the high school team, regardless of their age (unless it is the really small guys). These kids happen to be 14 to 17 but at most other camps I’ve had 11 and 12-year-olds. After the game, one player’s father came up to me and thanked me for doing a great job. I had no idea who he was before he introduced himself or which one was his son but he wanted to know how old I was and where I was from. He was shocked when I said 21 and not 31 because he had never seen someone that young “say all the right things”. He then recommended that I pursue coaching… LOL. It’s only been my dream for the last six years and I have been blessed to learn from such great people at North Florida these past three years. There is SO much more to learn and I can’t wait to continue growing as a coach.