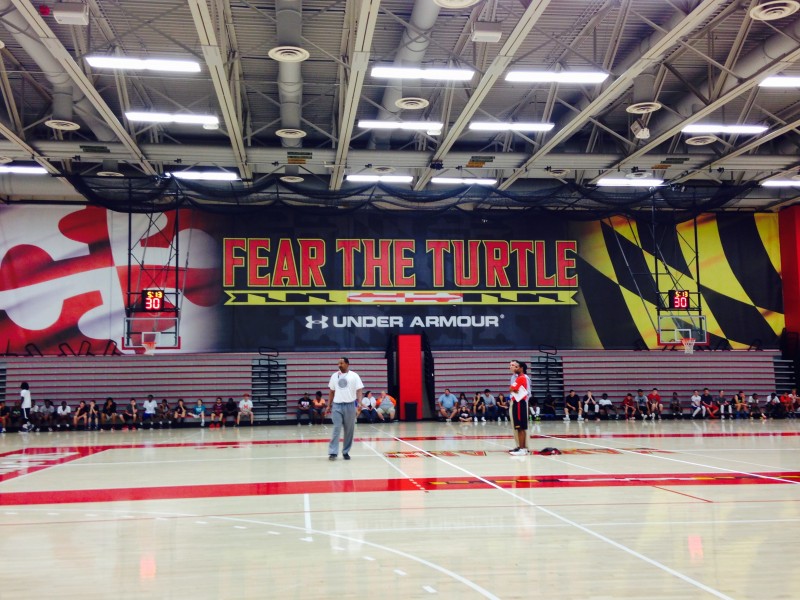 The morning got off to the usual early start and everyone walked over to the cafe for breakfast. Following the meal, each group went their separate ways as some went to the main gym while others went to the courts used by Intramurals. The campers are used to the walks between gyms but yesterday brought some really bad weather. My age group hustled through some rain to the main court before the downpour ensued. Another group was able to bus to their gym, as the site was a further walk from the cafe.

Before starting the 5 on 5 games, we had stations. As a result of there being more teams than baskets, most half courts had 2 coaches instructing. Our station was ball handling, one of my favorite drills to teach. I think I enjoy working specifically with this station because I know the importance of being able to handle the rock. I didn’t work on my handles as much as I could have growing up and I don’t want kids to make the same mistake as I did. Afterwards, we jumped on for our morning game and things just clicked. The game was never close as the aggressiveness and intensity were there from start to finish. My team improved to 2-3 with one game remaining.

After lunch, we had another guest speaker. Byron Mouton, a member of the 2002 Maryland National Championship Team spoke to the campers and showed them a couple drills that they could do on their own time. We also worked on some transition offense/defense prior to the afternoon games.

Instead of talking about the game in this next paragraph, I’ll just say I thought we set a camp record for the biggest loss. Turns out someone lost by 52 last week and we fell just short of that. I told my team before this game that I thought we were talented enough to win a championship but could also easily lose quickly in the tournament. Call me crazy but I thought even after getting absolutely demolished, we still had a shot.

As it turns out, the play-in games 7/10 and 8/9 were played and we somehow avoided the trip to “Dayton”. My team was stoked when they found out we locked up the #6 after winning a 4 way tie-breaker. The bad news came when the #3 seed was announced as the team we just played. Some coaching changes were made and instead of applying pressure at half court, we packed in the defense as tight as possible. The game plan was to force them to make jump shots and we were successful for the first 15 minutes or so. Unfortunately we didn’t have the depth to maintain our position in the game and were eliminated from the tournament.

After camp ended, we meet as a staff to discuss the following day’s plan. Maryland basketball staff has been very hospitable as they provide pizza, drinks, and snacks to the coaches. This is much appreciated, especially when dinner is eaten 5 hours prior. For the final night, the great hospitality continued with a coaches social at a local bar. I know I enjoyed this time as I’m sure many others did as well to talk and better get to know one another outside of a basketball setting.