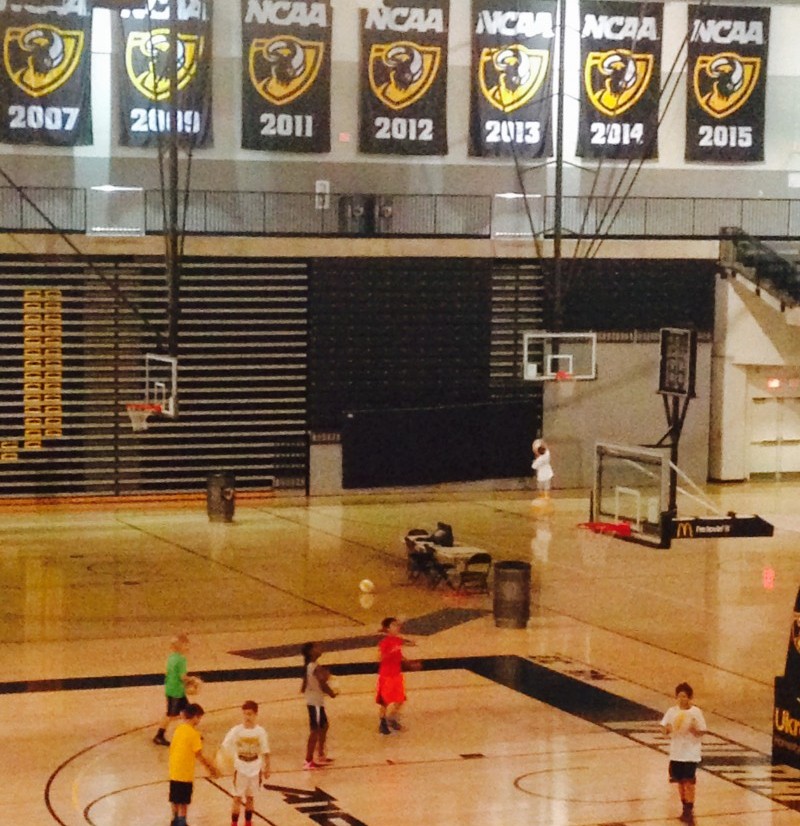 The final day of The Camp Tour had arrived as things wrapped up in Richmond, Virginia. It was Championship Friday at the Will Wade Basketball Camp and the campers came in hungry for the hardware. A particular camper was ready to transition from assistant coach to MVP. The young man that sprained his ankle and was in a walking boot yesterday came up to me excited as ever. I didn’t even consider the option of having him play until he begged me for a good 20 minutes. I gave in and told him that the final decision would be up to nobody other than the trainer. When he received the all-clear, I knew we had a good shot of winning it all.

The morning began with a shortened rotation of stations. The kids were anxious to get to the contests and competitions as they had little interest in further working on the fundamentals. Prior to lunch, the hot shot and knockout competitions took place and the top two campers from each team advanced to the final round. This competition took place on the main floor at the rest of the campers were able to watch. Energy and intensity were at an all time high, both by the campers and coaches. I was a proud coach to have the final two members of the knockout game remaining.

After stopping for the pizza lunch break, the VCU players took the floor and put on a show for the campers. Dunks and threes were raining inside the Siegel Center as the campers were going crazy. This was a nice break as the kids enjoyed watching their idols play while they were simultaneously resting up for the afternoon. Prior to the 5 on 5 championships, the camp arranged a team shooting competition. Each team was placed in a bracket, and every round was scored as best of 3. The campers were to shoot from the elbows and the first team to 15 won a point. My team advanced to the finals but came up just short.

I think losing this competition actually helped focus our team for the 5 on 5 championships. They seemed to be all over the place with many not listening to simple directions. As a result of having the #2 seed and clinching a bye, we were off for the first round of games. I decided to use this time as a team practice and run through our offensive sets. I even installed one new play as other coaches were starting to figure out how to guard what we were trying to do.

Our first matchup of the tournament turned out to be our most competitive game. An 8 point lead (which is astronomical in a 15 minute game with 5th-7th graders) was erased and the game was tied with 2 minutes to go. I was a bit nervous as none of our sets were working and we couldn’t get a stop. Fortunately, we found a way to win and advanced to the semis. I thought this would be our toughest matchup as we lost two of three to them in the regular season. This team was very strong defensively and just tougher than any other team. My team raised their level of toughness for this game and won the semi-final by a comfortable margin.

The championship game took place on the main court with 200+ campers and many other parents watching. The lights were on and this was the time for boys to become men (not really). We were able to build small leads as our sets led to very good shots on the offensive end. Defensively, the opposition was able to creep back into the contest by hitting some deep shots. As much as I wanted to pick up at half-court, we could not contain the ball so we had to pack in the defense. I was content with getting beat by a handful of 3’s but wasn’t going to allow one player to drive by my team and get a wide-open layup every position. My team held strong and THE CHAMPS ARE HERE!!!!

I couldn’t have picked a better spot for The Camp Tour to come to an end. The staff at VCU was extremely welcoming, and treated me like family from the minute I got to Richmond. I am now spending the night at a hotel in Fayetteville, NC and continue the drive to Jacksonville early tomorrow morning. I will be posting a reflection blog on the whole trip sometime in the next week, so keep your eyes out for that. I want to thank all of you that have read anywhere from 1-35 blogs as I hope you enjoyed this journey along with me. To all aspiring coaches out there, PUT TOGETHER A CAMP TOUR!!!! What an amazing experience that I’ll remember for the rest of my life.