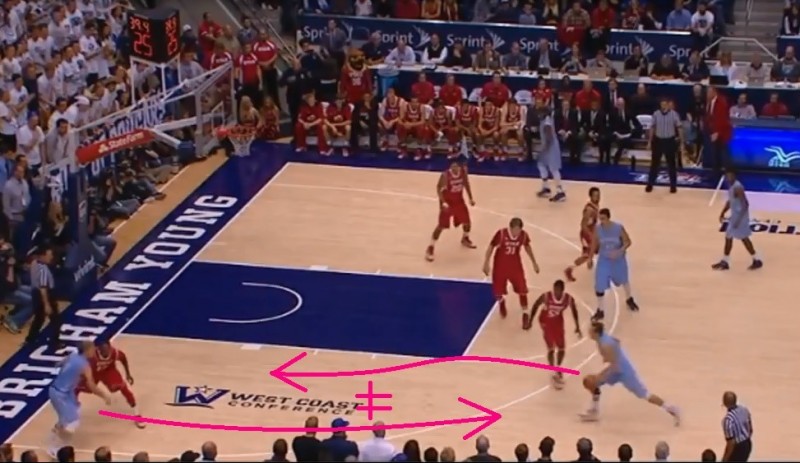 Tips for implementing dribble handoffs into a four-out motion offense while staying within the screening rules.

The dribble handoff is an action that is increasing in popularity at all levels of basketball. Many coaches are using dribble handoffs much the same as ball screens. The goals are to create a switch, give a player an opportunity to penetrate and to create drive and kick opportunities.

Historically, true motion offense does not heavily feature these actions. Dribble handoffs can, however, be a weapon that fits within the framework of a motion offense.

The screening rules in this system are as follows:

To stay within this framework, implement dribble handoffs with this rule:

Screeners are used to finding cutters within the offense and look for them when setting downscreens and flare screens. Further, they often dribble at cutters to initiate shallow cuts. Given this, adding dribble handoffs can be seamless. Teaching dribble handoffs can be integrated with the two-player motion offense drills that are part of the backbone of this system. Begin teaching them in conjunction with shallow cuts and 2-on-0 downscreen drills. Remember, there is a designated screener and cutter in each pairing. Use the dribble handoff paired with the flare/slip to generate game shots in this drill. (Click on the diagram below to add this drill to your FastDraw library.) As players begin to master the techniques of dribble handoffs, progress to 2-on-1 drills where only the cutter is guarded. Eventually dribble handoffs can become an entry into 2-on-2 live drills.

Another way to build dribble handoffs into your motion offense is to use them as restrictions in 3-on-3 live and four-player drills. For example, the coach can say that every possession has to begin with a handoff. Or stipulate that you must score on a flare screen that was set up by a handoff. Restrict three point shots to only those created of drive and kicks generated by handoffs. Restrictions are limitless!

These pointers should help you integrate the advantages of dribble handoffs into this motion offense system. The roles assigned to players in this system should facilitate the learning of this valuable action.