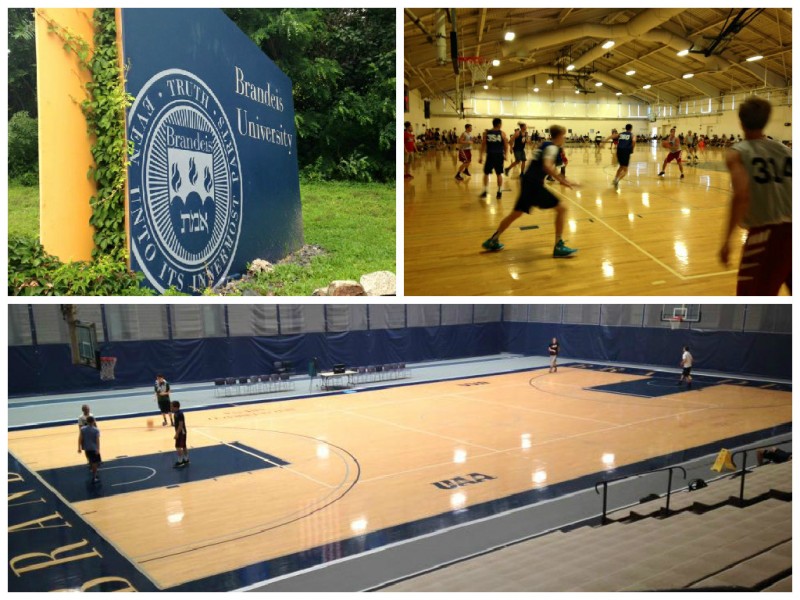 I’ve only been a college assistant for four seasons, but I’ve been lucky to have worked multiple camps in several states during the past 3 summers. I’ve learned a lot, met a lot of great coaches, and became a better coach working with campers of all ages. I know that many coaches have worked more camps than I have (especially Zack Freesman!), but I am grateful for the opportunities I have had to work with (and for) all of the awesome coaches at some great programs.

HOW IT ALL BEGAN

During my junior year at the University of Kansas, I started volunteering at a local elementary school. My girlfriend at the time, fiancée now, was working part-time in the after-school program and mentioned she could connect me with one of the parents who helped coach the basketball team. Little did I know that helping with Sunflower Elementary would prepare me for camps in the following years! Soon after helping out the elementary school team, I met with Blake Mudd, head coach at the time for the Veritas Middle School team. I had met one of his former players while working downtown at a frozen yogurt shop. The player recommended I get in touch with Coach Mudd and see if he had any room for volunteers. I was nervous…. I had little experience and didn’t know what to expect. Of course, the meeting went great and I was suddenly a part of two programs. But I wasn’t done there… In addition to my classes, working as a manager at the frozen yogurt shop, and volunteering with the two teams, I reached out to Head Coach Chad Killscrow at Haskell Indian Nations University. Judy Gipp, AD at the time, and Coach Killscrow met with me and before I knew it I was set  helping out with 3 teams! It was a busy time, but I enjoyed it. I knew that I needed to pursue a career in coaching… but how?

The first camp I worked was for Coach Ric Mitchell. He had just founded Independent Home School, which was providing organized team sports for home-schooled students. I had zero experience with camp, but I could remember what camp was like when I was young. Coach asked me what I was comfortable with teaching, so I went with ballhandling. Even now, that is my favorite area of the game to work on with campers. After IHS, I worked camp for Coach Bill O’Connor at Rockhurst University in Kansas City, Missouri. It was huge! I couldn’t believe how many kids were at the camp. Turns out this wasn’t even close to the number of kids I would see at other camps. For the 2012-2013 and 2013-2014 seasons, I worked for Coach Tommy Jones at Texas Lutheran University. During that time, I worked several camps including:

HOUSTON – Coach Dickey was awesome… He and my boss at TLU went way back so that’s what got me in the door. The thing I remember most from UH Camp was Coach Dickey playing H-O-R-S-E with campers. He would have everyone sit down around the 3-point line as he started shooting and warming up. He would talk about shooting form and what it takes to be a good shooter. Then, he would challenge one of the older kids to come up and play H-O-R-S-E. Keep in mind, Coach Dickey is wearing a light jacket and khakis.. so the kids don’t know what to expect. During his warm-up he kept missing shots (on purpose). Coach Dickey gets down a few letters to get his opponent confident, but then he turns it on. Coach Dickey couldn’t miss. He was making 3’s, bank shots, and free-throws, all in his jacket and pants.

TEXAS A&M – CORPUS CHRISTI – This was an Elite Prospect Camp. It was great because there were 150 Texas players and several college coaches working the event. A few of the coaches on Coach Wilson’s staff are guys that I keep in touch with on a regular basis. The organization of the event was great. I ended up using a lot of ideas from Corpus Christi for the Elite Camp at Colorado College a few years later. I really enjoyed the social media presentation. The coaches had gone through and found tweets from campers and current players and read them out loud in one of the classrooms. The point was to make the campers aware of what they are posting to the internet. It was a fun, creative way to make the kids pay attention to an important aspect of recruiting.

TEXAS STATE – Coach Kaspar had just taken over the job after previously being at Stephen F. Austin. San Marcos is right up the road from Texas Lutheran so it was an easy commute for the week. I can still remember how involved Coach Kaspar was! He held all of the camp coaches accountable and wanted each and every camper to have a great time, not just a good one. I learned a lot on how to get the best out of your camp coaches that week and how to take into consideration the quality of time each camper is having.

HOUSTON ROCKETS – I have worked more Rockets Camps than any other… tNBA hosts Rockets Camps all over the Houston area, and I was willing to drive wherever needed to help out. Sugarland, Pearland, Stafford, Cypress, Clear Lake, The Woodlands, and Humble… I was in the Friendswood/Clear Lake area (Southeast Houston), so I would have to get up extra early to beat the traffic and get to camp by 8am. It was worth it though.. I learned a bunch of new camp games as well as some strategies for dealing with lunch (specifically downtime during lunch). Coach Love also let me be director for a couple of the smaller camps (around 35 kids) which prepared me for when I had to run the camps at Colorado College. THE COLORADO CIRCUIT – In the month of June, I worked all of the following camps.

METRO, MINES, & AIR FORCE – After a year at Colorado College, I started my camp circuit this summer with Metro State Team Camp. Taylor Harris, the former assistant, hooked me up with working the clock for the games. Metro did an awesome job. They had a ton of high quality teams playing and were able to stay on schedule for the most part. They also had energy bars provided by Gatorade (a nice touch for the campers). Colorado Mines camp was a Little Diggers camp for kids grades K-5. I liked this layout, because it allowed the coaches to focus on the skills needed for these young campers. Often times at a bigger camp, the little kids just have to try to keep up. Air Force was another team camp and I got to work the clock for that as well. There were less teams, but more local Colorado Springs talent to watch. COLORADO COLLEGE – For our own camps, we went with a new camp schedule. I was in charge of the marketing, operations, and directing. Running a camp was something I had been preparing for for the previous two seasons, so I was excited for the challenge. We ended up doing a Youth Camp (Mon – Thurs) and an Elite Camp (Thurs – Sat). We had almost 50 kids for the Youth Camp and we set a record for our Elite Camp with 30 campers. With most of our players not from Colorado, it was difficult to find enough guys willing to work. However, we got some seniors to step up and help out in addition to Assistant Coach Brian Gustafson and Head Coach Andy Partee. Building on this summer’s experience, I’m hoping to make it even bigger and better next year.

USA BASKETBALL – BJ Johnson is the man… simple as that. As a director at USA Basketball, BJ helps coordinate the travel, schedules, practices, games, coaching staffs, and support staffs for the multiple team camps held at the Olympic Training Center in Colorado Springs. In October last year, BJ let me help with the U16 mini-camp. Coach Don Showalter is the head coach for the U16 team. I had so much fun watching those players work together and go through the practices led by Coach Showalter. BJ even let some of our Colorado College players work the mini-camp. We had a some seniors, juniors, and freshman help out. In the summer, I helped out with the U19 practices coached by Sean Miller, Ed Cooley, and Archie Miller. Being that close to those coaches was like a dream come true. In watching Coach Miller I learned how to be efficient and effective. He was so polished in getting his point across. NEW MEXICO – I met the Ben Sanders at the Final Four Convention in Dallas in 2014. He was at Rice at the time and I was looking for a new job after the head coach at TLU had retired. A year later, Ben was at UNM and I was only 5 hours away in Colorado. I hit him up asking if I could work the short shooting camp they had on a weekend. I told him I was willing to work for free if they already had enough coaches. Ben was a great host and introduced me to the whole staff. Coach Neal surprised me on the last day and ended up paying me for the camp. The staff there was totally involved with the shooting camp, and ALL of the players were working as well. Not only were all of the players working, but they did a good job of having fun with the kids and teaching them shooting skills. My last camp of the summer was at Brandeis University for the Hoop Mountain All-Academic Showcase. This event was a great experience. Not only did I get to recruit high academic players for Colorado College, I was able to meet tons of high academic coaches. Since Colorado College is the only Division III program in the Mountain Time Zone, I don’t see many D3 coaches on the road. This was a nice change to that and I was able to meet Division III Head Coaches and Assistant Coaches from all over the country. There were almost 400 players at the camp, and my job was to ref, coach, and watch games. Although a long week, it was a great time and a valuable recruiting camp for our program.

A FEW TIPS FOR THE ROAD

From all of these experiences, I’ve tried to take something from each camp that I can use to improve as a coach. I have been able to improve my skills as a camp coach, expand my network, improve skill development coaching strategies, and have learned a ton on how to organize and run a successful camp. Here are a few tips on how to get involved with camps and for learning the most from working them.

If you have any questions about camps feel free to reach out to me. Best of luck to all and keep growing the game!