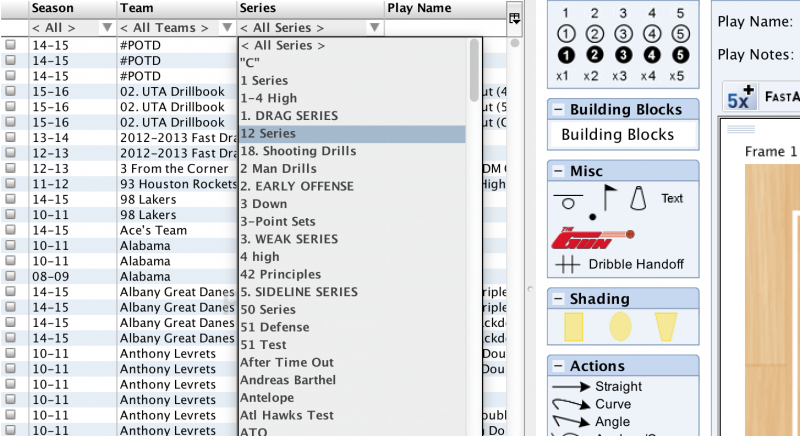 As the summer is ending and the new season is approaching, there has never been a better time for coaches to take a look at how they organize all of their plays and coaching notes. If you are like me, you have a seemingly endless supply of notes, game films, clinic DVDs, and plays. Having all of that information is great, but if you are unable to find it and access it when it is needed, it quickly loses its value. I consider myself to be a very organized person, and I have spent some time trying to implement a system of organization that would allow me to quickly locate and access the information that I need.

In this blog I want to share my system for naming and organizing all of the set plays that in have in my library. Every time I watch a game I end up taking an action or set play away, and I am willing to bet that I have 500+ sets in my FastModel library. I wanted to be able to look at the name of a set play and have a general idea of what the main actions where, so I created a system in which I gave every single action that could occur on the basketball court a name that I would be able to remember. Then, when I add a play to my coaching library, I name it according to the actions that occur in the play. This gives me a general idea for the play without even having to look at the actual set drawn out. Below is an example of my offensive action terminology sheet. For example, if I have a play in my library called “Sixer Ram Duck”, I know that the order of actions that will occur are a cut from wing to wing across the elbows, a screen into a ball screen, followed by a post player duck-in. This is extremely helpful to me. Now when I know that I want to add a play that features the back screen ball screen action, I am able to look for the keywords “Rip” coupled with “Wing”, “High”, or “Ram” rather than look through hundreds of sets named “spartan” or “tiger”.

I have also added a new system for numbering my pick and roll sets so that I can identify which positions are involved in the ball screen action. To do this, I place a set of numbers prior to the action list. For example “51” would mean that the 5 man is screening for the 1 man in that set. The screeners number is always first, followed by the ball handlers. For example, a pick and roll set that involves a high ball screen with the 5 man and 1 man, followed by a roll and replace action could be called “51 high trade”.

When it comes time to present your sets to your team, I would advocate changing the play name from the action list to a name that is easier for the players to remember. The new name should be easy to say and should also have a clear and distinct sound so that it cannot be confused. This will help eliminate clutter and excuses.

One other area in which this system has been effective for me is in scouting opponents. Because I have my terminology system memorized, I can easily remember all of the sets that the opposition is running as long as I name them according to the actions that take place. This has been a huge time saver and can really help you in writing your reports.

I hope that this system can be helpful to you! I encourage you not to just take my terminology and apply it verbatim, but rather to choose terms based on what will help you most effectively.