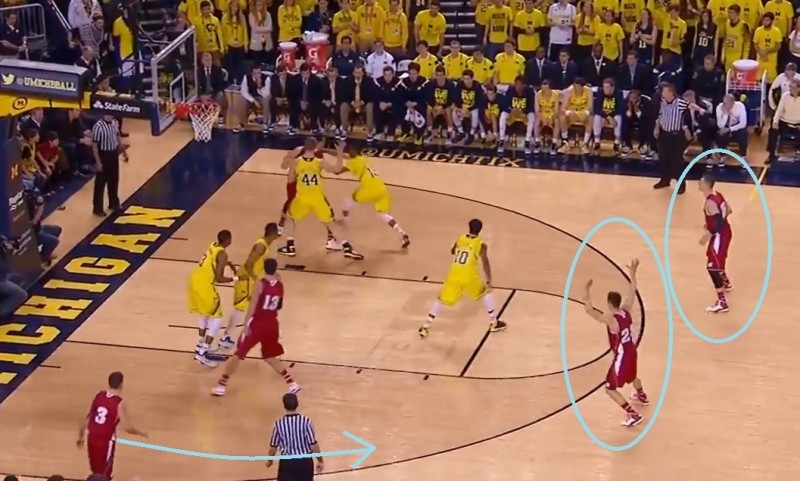 Tips for improving the inside-out game in your four-out motion offense by executing the “Rip Series” on post entry.

In an earlier volume, we discussed various ways to involve the post player in four-out motion offense. They can be a vital part of the screening game or simply a “garbage player” who gathers putbacks and drop-offs depending on their skill set.

Playing “through” the post is possible in motion offense. And like any offense, playing inside-out in four-out motion can improve the quality of shots generated.

Using a Rip Series when the ball goes inside “pushes the pause button” on motion rules and allows your team to adjust spacing to take advantage of the post entry. It is also a way to combat double teams thus leading to better one-on-one opportunities for the post.

Reading the defense’s reaction to the Rip Series can lead to both better shots for the “big” inside and lead to great inside-out basketball.

The foundation of the Rips Series is the rip cut. In the diagram below we see the 4 making the rip cut to the backside block when the ball goes inside. The timing of the rip cut is vital. When timed right and precise the rip cut can lead to an interior pass for an easy layup. But what triggers the timing?

Baseline to score. Middle to explore.

When the ball goes inside to 5, the four perimeter players should stay spaced. Do not crowd the post and take away his/her opportunity to score (or get fouled) one-on-one inside. Ideally, the post player seals their man on the high side and the feeder puts the ball in from a baseline angle.

Rule: When the post turns “middle to explore” the Rips Series is initiated and the other “big” rip cuts to the opposite elbow then down the lane line to the backside block.

Occasionally, the ripping player’s defender will turn their head and look inside on the post entry and the rip cutter can cut behind them and receive an interior pass from 5 for an easy basket.

Rip cutting can also be a counter to teams that double the post, especially those that double “big-on-big.” But most often the cutter is ripping to get into position for a backside rebound. The other “big” is always the rip cutter. Even if they were on the backside wing or the feeder, they rip cut.

Also, be aware that even after you rip cut, the post may still be intent on scoring. If they take a dribble or two toward the middle in an effort to score, the player that rip cut to the backside block can loop under the backboard to the block the original post feed went into.

Just as the “middle to explore” movement spawns the rip cut from the other “big,” it also sets into motion movement by the perimeter players.

In the photo above, the Wisconsin Badgers execute the Rip Series as part of their Swing Offense. The ball has gone inside to Frank Kaminsky and he has clearly turned middle. The other “big” is cutting to the backside block (rip cut). The players circled in blue are demonstrating one of the Rip Series rules.

Rule: When the post goes “middle to explore” fill the high elbows.

By “squaring the top” with two perimeter players, Kaminsky can see if a player comes from the top to double or dig and kick it out to the open man. These two players should be ready to catch and shoot or drive the closeout if the kickout comes their way. This provides for easy recognition of an opportunity to play inside-out basketball. Filling the high elbows is only part of the Rip Series rules for perimeter players. One player must fill the opposite corner. Be aware that filling in the “dead corner” can make you invisible to the post player. That guard should adjust their positioning to stay within the post player’s vision. Make yourself available for the skip pass – more inside-out basketball! Below, the Villanova Wildcats demonstrate the Rip Series. The post has turned middle. The other “big” has ripped to the backside block. Two guards have shifted to fill the high elbows and another guard is opposite in the post’s line of vision available for a skip pass from the post.

On the skip, the Rip Series becomes deadly. The wing can, of course, catch and shoot. They can also attack the closeout of their defender. Below is this “Rip Skip” action. One of the best attributes of a good offensive team is making the defense pay even when they do what they are coached to do or what seems “right.” The “Rip Skip Seal” action is an example of just that.

When the ball first went inside and the post player turned middle, 4 rip cuts to the opposite elbow then down the lane line to the backside block. X4 would, of course, be coached to front that cut and deny the interior pass. Doing so leaves them vulnerable to the Rip Skip Seal concept in the Rip Series.

5 skips the ball opposite to 3. Now 4 is able to seal their player inside for an easy post feed. Once the ball is kicked out and no shot or drive is taken, the team adjusts their spacing and floor balance by “rewinding” the Rip Series actions and resumes motion rules.

The Rip Series is not just for motion offense. It could be implemented with any offense in a four-out alignment. Take your offense to the next level by instituting the Rip Series on post entries. Find better shots playing inside-out basketball.

For help with teaching and drills for the Rip Series and a motion offense attack, check out the RAMP program.