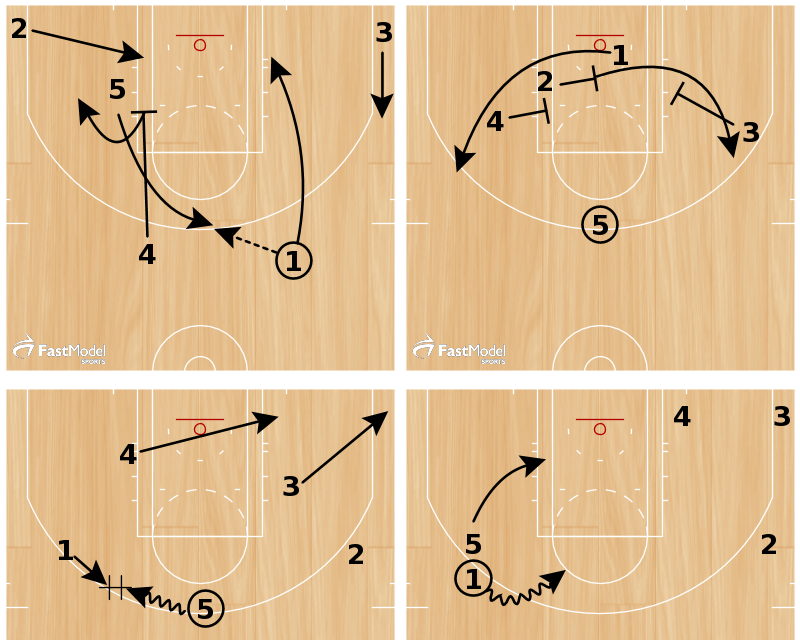 A type of set or offense that has been around for many years if commonly referred to as floppy.  Now this action does not have to be named as such but its importance and influence cannot be discounted.  Nearly every basketball program at the collegiate and professional level will have some form of this look.  The action is predicated on initiating with post players on the perimeter.  The bigs then “pin down” for the wing or wings that then have the opportunity to receive the ball on the wing.  The initial action can be a scoring action but beyond sprint off down screens and firing up long range jumpers, there are many ways to create an advantage using this action and the majority of these secondary looks have created scoring opportunities for some of the best players and teams in the game.

The first look typically begins with the 4 and 5 man free-throw line extended and the 2 and 3 under the basket.  Each player can then pop out on their respective sides, using the down screens (pin downs) set by the bigs.  The more likely scenario however is that we have identified a shooter or primary man to run off the pin down.  This turns the action into a single/double, meaning that on one side we have a single pin down and on the other side we have a double pin down.  The activated player can then decide to use the single pin down or the double pin down the first choice is his.  The secondary guard will then exit opposite the direction the activated player went.  Thus if the activated shooter uses the double pin down on the right side then the secondary guard will use the pin down on the left side. Another way to initiate Floppy is out of a Diamond set up.  This time the activated shooter is starting under the basket with single pin downs from the bigs on both sides.  Again he can choose which way to go and again the secondary guard will exit the opposite direction.  The only difference in this set up is that the secondary guard is starting at the nail (the middle of the free-throw line).  This means that when he exits the opposite direction of the activated player, instead of him using a pin down, he is using a pinch fade or flare screen.  Thus if the activated shooter uses the single pin down on the left side, the secondary guard will use the pinch fade on the right side. Running Floppy as a Pace offense is a new mindset that many NBA clubs are embracing.  Instead of walking the ball up the court with the wings settling under the basket and the bigs wondering out on the wings, clubs are now using Floppy as way to create quick scoring opportunities and find a second action without stopping the momentum of the ball.  That means the wings don’t just run the wing, they sprint the wing and on that full sprint cross under the basket.  We can still have an activated player that can uses the other wing as a screener, the wings can also meet under the basket and exit the same side they entered.  Additionally we have seen Ray Allen execute the “ring around the rosy” method, essentially locking arms with his fellow wing and using his momentum to exit the same side.  The main point of running floppy this way, is to push the tempo and as we have seen over the last few years the game is now being played as fast as its ever been.

Flow Away to Angle PNR

When running Floppy as a pace offense the first look is of course to hit one of out players on wing or curl off the pin down.  After the PG makes the first pass to the wing curling to the elbow, he then “flows away” or slides/relocates to the weak side slot to create space.  If that wing catches, drives and kicks the ball back to the PG the weak side big man can then sprint to an Angle PNR in the slot.  The weak side guard has already spaced to the corner and on the catch we look for this Angle PNR to create a scoring opportunity by quickly getting the ball into a secondary action after the pin down.  As the offense, the goal should always be to create rotations for the defense and ultimately a mismatch or advantage.  In this scenario the weak side big goes from help defense to PNR defender in the blink of an eye.  The nail defender goes from stunt man to on ball PNR man fast enough to cause potential coverage issues.  This secondary action can happen so quickly it produces some excellent scoring opportunities

When Floppy is ran as a GET action, this can indicate that the strong side big who set the pin down is the activated on ball screener.  Thus the wing receives the ball, the strong side big will then sprint to set the PNR, this can be an SPNR or a Step Up depending on the defense and the coverage.  From there the weak side players will space, filling corner, wing and dunker (duck in zone).

Punch indicates that after the small uses the pin down and receives the ball on the wing the big who set the pin down will post up.  We then look for a post entry, after which team philosophies take over (cut through below the block, down the middle, split the guard or space).

Floppy GO differs from Floppy GET in that the big who set the primary pin down will then continue to set a block to block screen for the weak side big.  The weak side big then sprints to the SPNR, presumably with is defender unattached.  The benefits of this are late or non-existent PNR coverage.  Thus a good screen in the PNR will allow the wing to get to the middle of the court and cause a mismatch or present an advantage.

Floppy Chest has a few slight tweaks.  As the guard comes off the pin down he curls to elbow much like the “flow away” look that results in an Angle PNR, with the corner filled.  In this case we will look to empty the corner, thus as the guard curls off the pin down the second guard follows and fills the strong side corner, thus leaving the other side of the floor naked.  On the elbow catch the weak side big then sets a flare screen on the PG who not only “flows away” but uses the flare screen and with then empty corner has much room to operate.

Our Floppy Drop is a great way to take advantage of a good post up guard.  As the activated player uses the double pin down from the PF and SF the C flashes to the elbow.  The PF then clears to the weak side corner, the SG settles on the wing while the PG hits the 5 at the elbow.  The SF remains in the low post and looks to find deep postposition for a drop pass or easy score in the paint.  This is especially effective when you have a height and strength advantage at the SF position.

Floppy Rub is a call to create a quick catch and shoot opportunity for a stretch big.  It can also create a deep post up for a guard.  In this look the activated player tight curls off of the pin down and screens in the defender of the screener.  This “Rub” screen allows the big to pop to 15 feet and get a catch quickly.  Most pin down coverage puts the screeners defender in curl protection, this helps create the angle for the rub screen and ensure the stretch big is open.

Perhaps you want to get your Point Guard involved in the action or perhaps you just wimple want to give the defense a different look.  If this is the case you can look to a different entry point outside of the static version where the Point Guard initiates the offense from the top of the key.  DHO or Zipper entry options are among the best ways to do change things up.

A DHO entry to Floppy will most likely be on the wing Guard to Guard.  This means the point guard would speed dribble pitch the ball to the corner wing coming up.  The wing will now become the point of initiation and the point guard will be come the activated player.  This look most likely proceeds to be a back screening action by the strong side big.  The popular version employed by the San Antonio Spurs involves a guard-to-guard DHO and a triple staggered baseline screen for Tony Parker who sprints the base line to find the scoring option on the weak side.  Important to not the weak side wing must be the second screener I order to prevent a switch on the final screen, thus negating any type of advantage or open shot.  Once the defense gets use to the triple baseline screen, Tony Parker will often times enter and exit the same side, thus showing us a DHO into a traditional Floppy Look.

Another great way to get into the action is with a Zipper.  The point guard dribble enters the ball to the wing and the wing is pushed to the strong side block.  Once on the strong side block the big sets a down screen from the elbow to the block for the wing who zippers up to receive the pass.  The wing then becomes the initiator of the offense and just like the DHO entry, the point guard can look to the triple staggered or same side exit.  All previous options are then live and we looks to find that ever-elusive advantage for a scoring opportunity.

In today’s game it is becoming increasingly important to vary your looks offensively.  As a coach you must have counters to the defense’s coverage.  That means finding different ways to get wing catches in scoring position free throw line extended or ways to create scoring opportunities with consecutive action.  The days of the V and L cut initiation have come and gone as have the days when a coach can have one offensive look, motion, flex or a system of sorts.  Understanding new ways to add a wrinkle here and there, to get a specific look at a specific time, for a specific player are becoming ever so important and often times the difference between a win and a loss.  Floppy Action provides a plethora of looks that just may help you get a dub.