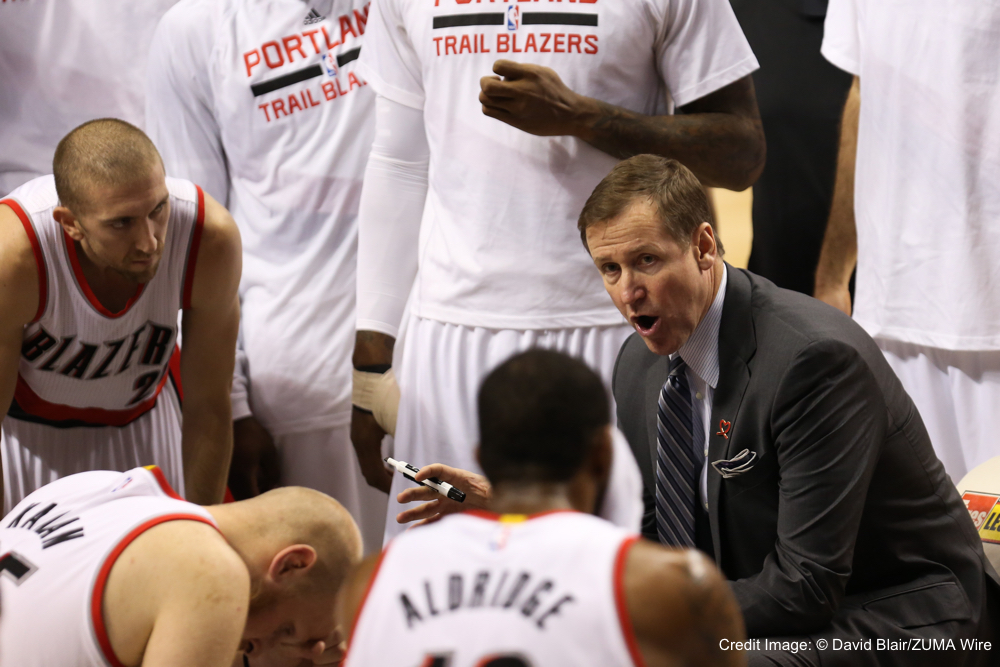 Turn on any NBA game and plenty of college games and you will most certainly see some variation of an offense ran through the elbows, similar to horns but not quite.  This offense is commonly referred to as C-Game, Push or as I have referred to it as the “New Motion.”  There are man reads within the framework of the offense that requires little more than reading the defense and reacting accordingly.  In this piece I will discuss 10 main reads as well as some additional looks.  It doesn’t matter if you play 4 guards with 1 big, 3 guards with 2 bigs or even 5 guards, some variation of this offense can provide with you with many scoring options.  This offense is predicated on quick reads, quick passes, ball reversals and solid screens.  If your players can execute then C-Game / Push maybe the offense for your squad.

This offense has two basic ways to initiate.  The only difference is the preferred placement of the 3 and 4.  Things can star as a 1-guard front or a 2-guard front.

After a made basket most teams prefer to have the 4 inbound the ball and thus the 4 man usually ends up in trail position.  As the 1 makes his way down the floor, the 4 can settle in the slot or slide to the elbow (thus presenting a horns look).  The 5 will always sprint the floor, run to score.  First look over the top to the rim runner at the mid-line.  If no deep post up is available the 5 can then flash to the elbow.  If you have interchangeable bigs the principles are the same with first big on the rim run.  Most likely however, teams looking for a more 4 out 1 in look will initiate with a 1-Guard front.  The 1 will also choose a side to initiate the offense,  it is important to maintain constant spacing.

If you so elect this offense can be ran as a 2-Guard front as well.  In which case the first big down once again rim runs to the midline and then flashes to the elbow.  The second big would then run to the weak side and settle somewhere off the lane line.  If you are looking to keep your bigs inside then this just may be the look for you.

Any time the 1 hits the strong side big at the elbow three main options ensue, below we take a look at each. If the 1 kicks the ball up the sideline to the 2 we refer to this as pitch, simply because the 1 has pitched the ball ahead.  Depending on when the advance pass takes place and your general preference on principles.  The 5 can set a UCLA screen for the 1 who cuts through, the 1 can rub screen the 5 who sprints to the SPNR, the 1 can screen away or the 1 can simply cut through to space out, regardless of what you want 1-5 SPNR ensues and subsequently your second side philosophies kick in on a ball reversal. If the 1 goes DHO with the 2 Slice Action can take place.  That means the 4 will pop out (or set a flare screen to move up top and then pop out).  The 2 will immediately reverse the ball to the 4 who will complete the full reversal but hitting the 3 on the wing.  The 2 will then “Slice” cut to the strong side block off the screen from the 5.  After the cut, the 5 and 4 set a double staggered for the 1 who receives the pass from the 3 at the top of the key.  After screening 1, the 4 and 5 complete the wheel action and screen the 2 who peels back off the second double staggered.  The 1 then looks to hit the 2 for the shot. Angle simply indicates the 5 steps up and hits the 1 with an Angle screen.  The remaining 3 players look to space out and fill spots.

If the 1 puts up a fist this can indicate a 1-4 MPNR.  Depending on your roster you can choose to always pop the 4 and dive the 5 across the lane or you can roll the 4 and pop the 5.  Either way a kick back to the pop man brings the 2 up for a 2-5 Chase SPNR. This option is primarily if you are working with a 2-Guard front.  A guard-to-guard pass up top would then initiate and Angle PNR with the 3 in the corner. If the 1 pushes the 4 into a wide pin down, push action ensues.  The 3 tight curls the 4, the 4 then pops back to the elbow and the 1 chases a DHO.  If the HO is not there the 5 screens away for the 2 and the 4 goes DHO with the 2 at the opposite elbow. If the 4 is on the perimeter and the 1 swings it to the 4 then the 4 can look to reverse the ball to the 3 for a 3-4 SPNR.  After the SPNR your team spacing philosophies can take over.