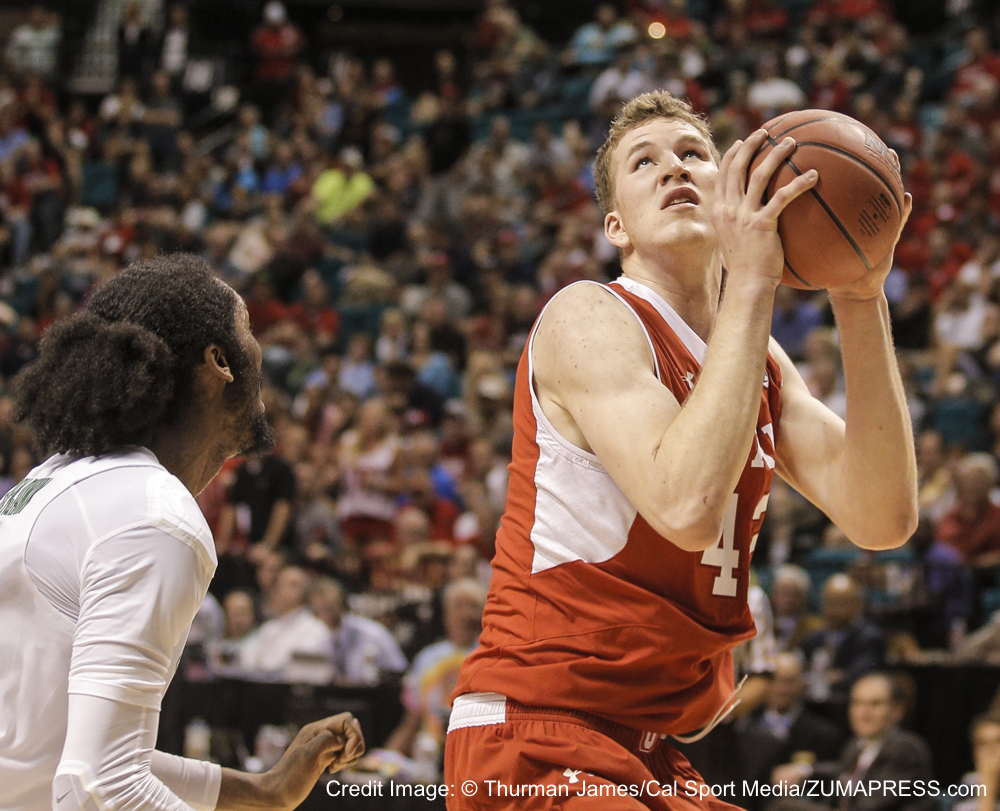 Tips for filling an open block and getting the ball inside using “Reverse Action” in four-out motion offense.

One of the best features of motion offense is that it has a high ceiling. As players learn the basics of reading defenders and maintaining spacing your offense will improve as the season goes on. Deeper understanding leads to better offense.

Motion Offense is also adaptable. It can be run from different alignments and operate with different rules. It can be outside or inside oriented. But do not allow your Motion Offense to become a “jump-shooting” offense. One way to avoid this is to use Reverse Action.

Reverse Action was a feature of the Utah Utes’ offense under Four-Out Motion Offense guru Rick Majerus. The concept can be adapted to the motion offense taught in this series.

The first step in getting to Reverse Action is a player (screener) must fill an open block. The post player in this offense is taught to be judicious with his/her post flashes. As a result, there is often an open block. There are three methods in which a player can fill an open block and they all involve reading the defense. None of the cuts into an open block are predetermined.

An open block can be filled by a screener executing a 7-Cut into the area. The 7-Cut gets its’ name because of its’ shape. Often the screener is the second player in a staggered screen and he/she begins the diagonal downscreen away and feels that their defender is either too high and hedging early or sitting below their screen leaving the open block vulnerable. Above we see 1 setting the second screen in a double stagger and then “7-Cutting” into the open block when he/she feels the block is vulnerable. The 7-Cut should be taken to the front of the rim for the score and then to the open block if the pass is not delivered. The method differs from the 7-Cut because the read was different. But in both scenarios the open block is filled.

In the two scenarios above, a screener (1) filled the open block by reading their defender and either 7-Cutting or basket cutting into the void. In the diagram below, the open block is filled by a cutter (3) on a curl. 4 and 1 read the defense and go into a staggered downscreen for 3.

Because 3’s defender trails the cutter on coming off the staggered screen, 3 reads “curl” and takes his cut to the rim then to the open block. It is important to note that 1 should set up outside of 4 in the staggered screen when reading that 3’s defender is trailing. This forces 3’s defender to widen even further when trailing.

Again, the method is different and this time it is a cutter (3), but we have brought a player into the open block and are now ready to get into Reverse Action.

Once the open block is filled it is time to initiate Reverse action. But first the players must “square the top” – another Majerus tenet that can be applied to four-out offense. Above, let’s assume that 1 has 7-Cut into the open block and 3 has come off the downscreen to the right high elbow. After setting the downscreen, 4 spaced to the wing. He/she must “blast cut” to square the top.

In the diagram below 2 passes to 3 coming off the cut. The next step is the trademark exchange of Reverse Action. On the pass back to the top, 1 sprints out of the open block and back screens for 2. The screener’s back is to the rim and they take their screen all the way to the defender. Screen “low, wide and big” and hold the screen. After 1 screens, they separate from the screen and look to get a catch on the wing.

The cutter comes off the back screen thinking not about scoring but setting the perfect cross screen for 5. They should angle their screen and let their back tell 5 where to go.

5 must read how they are being defended and either setup low and cut high or vice versa. Below we see the screening action of Reverse Action. Next, 3 passes to 1 who has separated from the back screen. 1 immediately looks to enter to 5 cutting off the cross screen. This is Reverse Action being paid off below with a post entry to 5 for an easy basket. Encourage players to slip, cut and curl into the open block and get the ball inside using Reverse Action. It is one of the limitless opportunities motion offense can yield.

For help with teaching and drills for the Reverse Action and a motion offense attack, check out the RAMP program.