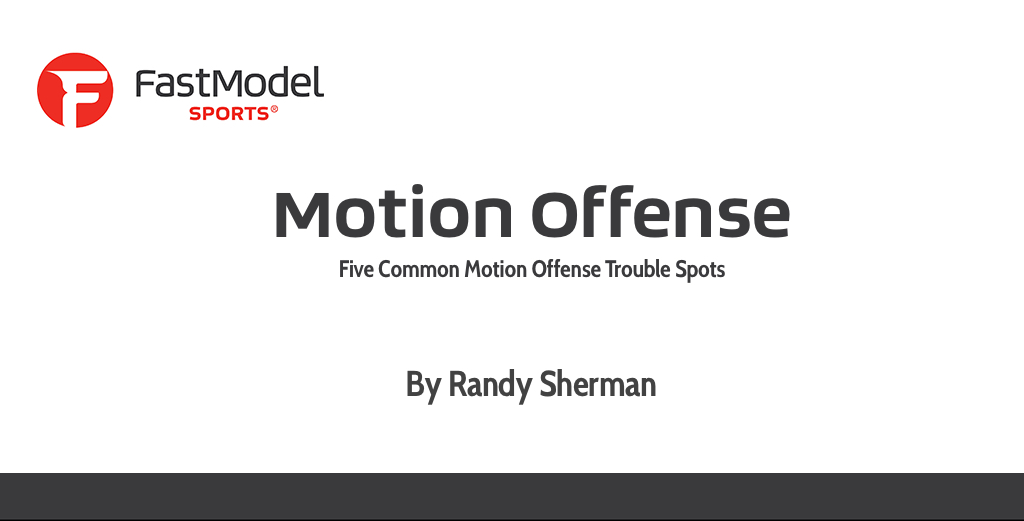 As part of our mentoring program and online clinics, I work with high school basketball coaches across the country on step-by-step implementation of four-out motion offense. The preseason saw us work through proper drill progressions, practice planning techniques and now that the season is here, film review.

As I have watched games on Krossover and fielded questions from clients, I have seen many of the same trouble spots along the way. Whether it is girls basketball, boys basketball, “big” school or “small” school, the sticking points are similar.

Here are five common sticking points in four-out motion offense. Getting through these pitfalls will help your offense improve throughout the season.

Cutters Leaving Too Soon; Lack Of Setup
The mantra for cutters is “WAIT, WAIT, WAIT” and then wait some more. Often cutters are so fixated on the ball that they get in a hurry, begin to cut way before the screener has gotten into position to screen and they migrate to the three-point line without reading their defender. Cutters may get a catch with this sloppy technique, but they likely will not be open for a shot for they do not force their defender into making a decision.

Teach cutters to wait for the downscreen. They must setup their cut with misdirection and change of tempo before beginning their cut. Use the sound of the screener’s feet jump-stopping into the screen as a trigger for the cutting phase.

Flare Screening With The Ball On The Wing
One key to motion offense is timing the ball with the action. Often screeners, with good intention, initiate weakside flare screen action that is ill-timed with the ball. The flare should be set with the ball on a high elbow, not the wing. The cutter, when using a flare, often ends up on the wing. This is fairly useless when the ball is on the opposite wing. The pass is too long. Screeners should recognize when they flare screen a bit early and rescreen or better yet, wait to start the flare action until the ball is brought to the high elbow. The action must be in concert with the ball.

Flat Screening Angles On Downscreens
The foundation of motion offense is the basket cut. Not only does the basket cut create scoring opportunities, it sets the angle for the diagonal downscreen. Often, screeners are more intent on screening after they pass than they are basket cutting. This can lead to flat screening angles and downscreens that are easier to defend. When the pass is made across the top, the passer (screener) must attempt to cross the face of the defender with a basket cut. If their defender fronts the cut or moves into the gap, the screener then “squares off their cut” with a sharp angle into the downscreen. This will help get the proper screening angle. On the downscreen, the screener’s back should be to the top of the circle when screening. Teach players to play off the NBA three point line and keep the top squared, not arched. TOO high, TOO wide and TOO spread apart are your spacing goals. Below we see Villanova demonstrating excellent wide spacing and floor balance.

Slow Fill Cuts
When one of the top two spots in the four out alignment is vacated by a basket cut, “squaring the top” with a fill cut becomes paramount. Players should look at fill cuts as an opportunity to create a lead against their defender. When players do not execute hard and urgent fill cuts, they do not create an advantage over their defender. Again, they may get a catch, but the lazy fill cut will not force the defender into recovery. We want to play against the momentum of our defender. Fill cutting hard creates this. Use the word “blast cut” to describe these fills to your players. The aptly-named cut sets the tone of urgency.

Motion Offense can get better and better throughout the season while many other offenses have a ceiling. Teams often grasp the “big picture” of motion offense, but lack the attention to detail to take it to the next level. Spot these common errors and teach players to avoid them and watch your motion offense improve.