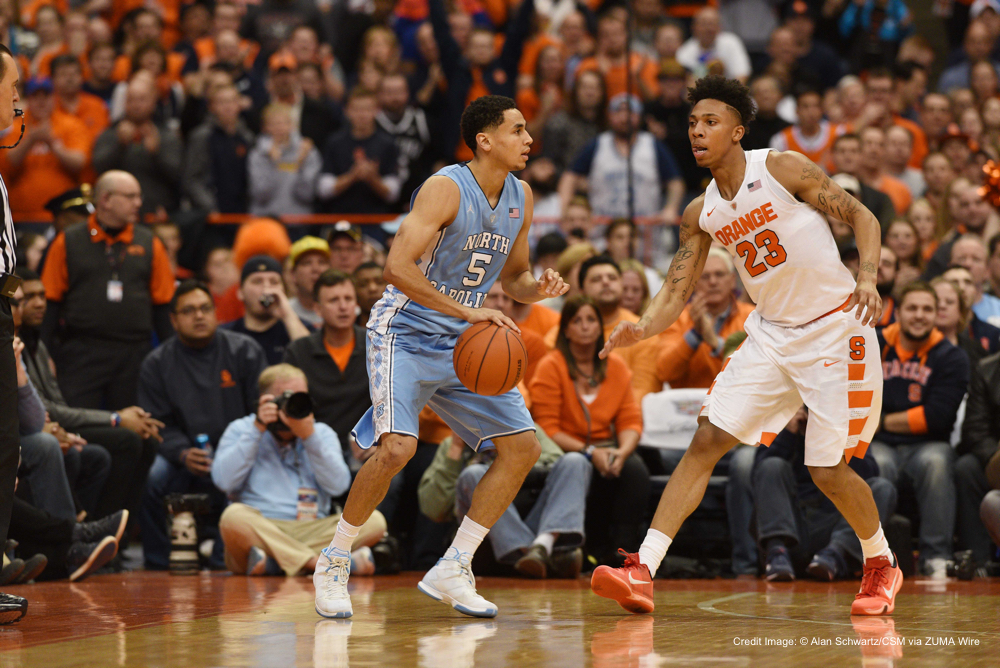 Add scoring punch by teaching these three detailed elements within your basic zone offense versus a 2-3 zone.

There are standards for a quality zone offense and each possession should feature as many of these standards as possible. Choosing the correct alignment, playing behind the zone, probing the gaps, using the middle flash and reversing the ball give the possession the best chance to be successful.

Beyond those fundamentals of zone offense, there are additional details to implement which can take a zone offense from good to great. Let’s take a look at three zone offense elements that compliment the basics.

The term penetration evokes the image of a player driving into a gap in the zone. The gap dribble is surely a foundation of a good zone offense. But an additional form of penetration is corner penetration.

Instead of driving into a gap, a player “dribbles off the top” toward a corner dragging a defender to the border of his/her area. This action elicits player movement as well. In the figure above, 1 corner penetrates and 2 fills the top from behind. The corner penetration moves the player on the wing (3) to the opposite side. 1 then follows a zone offense principle of “passing against the grain” of the dribble back to 2.

The subsequent reversal leads to distortion of the zone, a two-on-one and an expanded short corner.

Corner penetration can also elicit a shallow cut as diagrammed below. 1 again dribbles off the top and 2 uses a “two-gap” shallow cut to fill the top. 1 then passes against the grain to 2 at the point of the offense. Below we see Kansas State using corner penetration to bring about a shallow cut versus 2-3 zone.

Zone offense can also involve the flare screen to seal pieces of the zone in conjunction with passes against the grain after corner penetration.

Sealing Out From The Short Corner

A main objective of most zone offenses against a 2-3 zone is to get the ball into the high post. The soft spot in the interior of the zone can be an advantageous place.

When a player catches in that area have them follow this order of operations:

Be wary of turnovers as they relate to the dump down. When a player catches in the middle of the zone and there is a teammate in the short corner behind the zone it can present “false daylight.” In most 2-3 zones, X5 chests up the player that catches in the middle. The wing defenders then “pinch” to the blocks as diagrammed below. While there may be a window in which 4 can make a quick pass to 5, the better zone teams are pinching and closing that window. Beware of false daylight – windows that appear open but are rapidly closing. Sealing out can be the type of zone detail that increases output versus the better zone teams on your schedule.

Flashing Behind A Backout Dribble

In many zone offenses a player flashes from behind the zone into the middle upon the pass from point to wing. Consider delaying that flash to give the wing a chance to probe the gap.

The concept of “flashing the backout dribble” gives the player who is cutting from behind the zone a visual cue to start his/her flash. If the wing is able to split the gap, there is no high post clogging the lane. If the defenders seal the gap, the ball handler uses a backout dribble. This backout dribble triggers the flash.

Often two defenders will pursue the retreating dribbler thus creating a bigger interior void for the flashing player to occupy. When the ball is entered to the high post flash the same flowchart of shoot, dump down or fan applies.

The key to zone offense is know who is guarding you and knowing where the came from. Use these finer points of zone offense to exploit the behavior of the zone and add scoring punch to you offense.

For help with practice planning and implementation of a zone and/or a motion offense attack, check out the RAMP program.