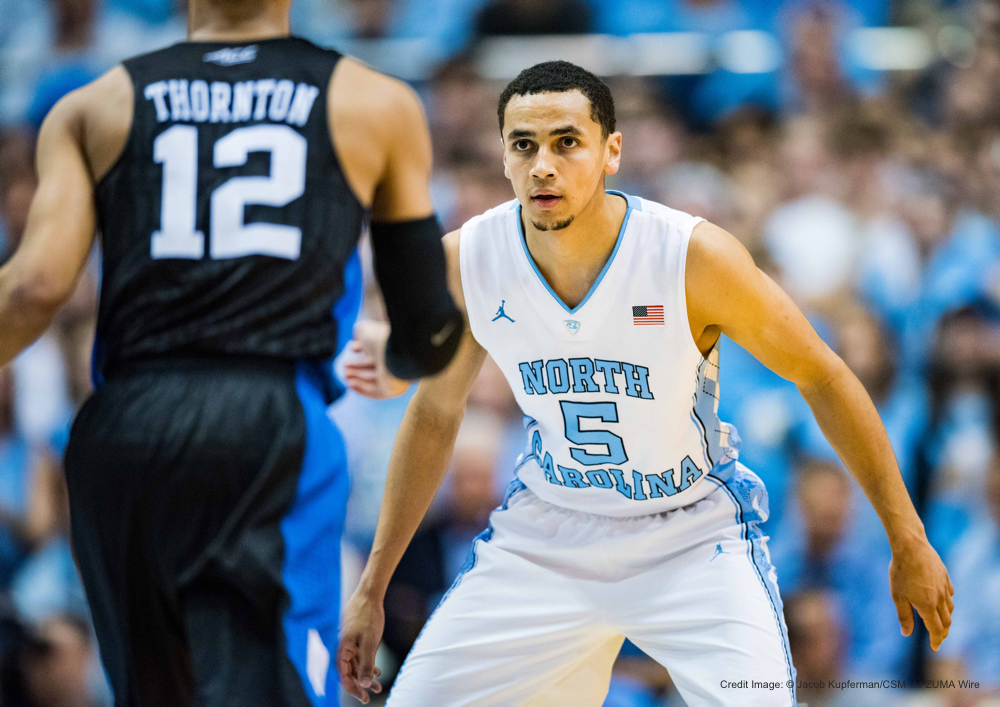 Denying and disrupting cutters is vital to the success of man-to-man defense. Here are some pressure man-to-man philosophies against common offensive cuts.

There are cuts which are common to nearly all man-to-man offenses – from motion offense to set plays. Rules govern the defense of these basic cuts making defensive positioning black and white for your players.

Here we will look at four common offensive cuts and the pressure man philosophies for each of them.

The “Give & Go” is the most basic action in offensive basketball. After a player passes, they are at their most dangerous when they cut. Stopping the basket cut is vital to quality pressure man-to-man.

In the diagram below X1 is influencing the ball to the sideline checkpoint and the pass it made to 3 on the wing. 1 basket cuts after the pass. It is imperative that X1 move in direction of the pass to prevent the give and go. There are many coaching cues for X1 such as:

The message in these cues is the same – X1 must immediately move to the pass and deny the return. If the cutter stays on the basket cut, they must cut behind the defender.

Below we see the perils of head-turning and ball-watching and surrendering the basket cut. Coaches must stress that there is no period of indecision or relaxation here. This is a black and white rule with no room for interpretation.

If the ball moves, you jump to the ball and force the rear cut the millisecond the ball leaves the passer’s fingers. This is done on every pass with no exceptions.

Many offenses such as the Kansas High-Low offense can start with a forward pass and a weakside cut away. At times the player is screening away or simply emptying to the weakside corner.

The rules of X1 in the diagram below are the same no matter what the cutter is off to do. The cutter may fake a cut away and come back to the basket cut. Approaching off the ball defense with the mindset of always preventing the return pass will protect players from falling prey to even this action.

But most important, X1 must move to a helpside position when their man crosses the midline. They must be available to help on drives and be loose enough to allow a teammate through if 1 is screening away. Above we see X1 chasing or following the cutter as they move away. X1 is being drug away from helping. They would also force a teammate who might be getting screened to not only go around the opponent but their own teammate as well.

A common counter to pressure man defense is the “push through” when the ball is being dribbled towards the wing. Perhaps your team is doing an effective job of preventing the triggering wing entry pass of the opposing offense and 1 dribbles at 3.

Often 3 will clear all the way to the opposite corner. It is tempting to chase the cutter out to the weakside, but X3 must stop on the midline and become a help defender (see diagram below). The dribbler may turn the corner on X1 and have a clear path to the basket if X3 chases the cutter out of the lane. In the diagram above X3 is chasing their defender out of the lane thus exposing the rim if 1 is able to turn the corner and drive baseline. Further, many offensive actions set weakside screens for players being cleared out with the dribble.

Chasing these players leaves defenders vulnerable to being curled for easy layups.

One of the tenets of pressure man-to-man is never letting a weakside offensive player flash to the ball and get a catch. This also ties into the idea of preventing damaging ball reversals that favor the offense.

When a player (X3) is in proper help position, their primary role is to do just that – help. It may be on a baseline or middle drive or it may mean helping a helper.

But the helpside defender must also prevent flashes to the ball and easy catches that lead to ball reversal. This takes a bit of physicality as we want the help defender to “bump” the cutter and deny the centering pass. If 3 does catch the ball from 1, it should be while going away from the basket with their back to the rim. It is a must that the cutter not be able to cut underneath the help defender. X3 stays a bit lower than the line between ball and man at all times. If the cutter attempts the low cut, X3 must lower accordingly. X3 wants to force the catch higher.

If X3 does not have split vision of ball and man and does not compete physically to deny the catch, the offense can change sides of the floor with an easy ball reversal or cut underneath for an easy layup. Preventing these sort of passes leads to the offense “sticking” on one side of the floor and reduces the space the offense plays in.

Defense is comprised of laws. There is little nuance or room for interpretation. Following these basic rules when defending cutters on an individual level leads to better defense on a team level.

Using these concepts as the defensive backbone against the common offensive cuts you will see gives players simple, clear and non-negotiable rules to guide them.

Any questions: Contact me! Happy to talk hoops any time day or night! If you would like to be added to the motion offense and pressure man defense mailing list, email and let me know!