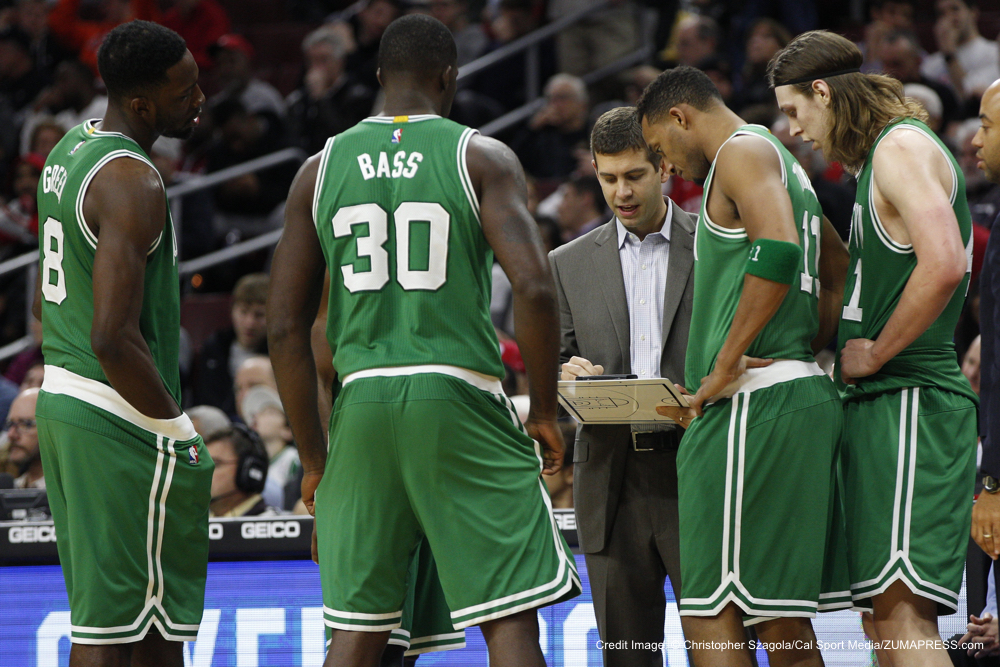 Brad Stevens is my favorite coach in the NBA, and he is an elite leader at getting the most out of his players on a nightly basis. Perhaps his strongest suit as an X’s & O’s guy is his end of game sets and specials to win and keep his team in basketball games. His ability to draw up great end of game actions and sets with multiple counters has put him in a league of his own when his team needs a score. I produced a video showing his full end of game playbook with the Boston Celtics, and will focus on my favorite actions in this article.

This is my favorite Brad Stevens set that he runs at the end of games when his team needs a 3 point shot and it almost always results in an open look for Avery Bradley. Beginning with the player you want to receive the flare screen, he zipper cuts to the top of the key as a decoy. After the zipper cut, a guard on the weakside block sets a backscreen for a big (3-4 man) to cut toward the rim on the opposite side of the key and receive a pass. After the big catches the pass, the other big man sets a flare screen for the initial guard to get an open look from 3.

When the Celtics need a quick score for 2 they run backscreen out of a post up from a guard. Since the Celtics have versatility Stevens typically runs Evan Turner off a screen into the post, and the big then sets a backscreen for a guard at the top of the key. This option will not be there every time, so the big then continues and turns to set a pindown screen for the guard in the corner to look to get a jump shot off a curl cut. If all of these options are covered, he lets the player in the post go 1 on 1 and try to get a score.

A simple set in which a guard fakes cutting off the backscreen from a big, typically a shooter, who then hesitates and gets a look for a 3 point shot. The key here is the big man selling the backscreen look and hesitating before exploding on his cut to the 3 point line.

This is a creative set and it is similar to weave action in which 3 players flip or pitch the ball as an interchange. On the final flip, a big steps up into a ballscreen. What I like about this set is it gets the players attacking to their strong hands off the final ballscreen: Avery Bradley to his right, and Isaiah Thomas to his left.

Another set that uses Boston’s versatility very well with their big men’s shooting ability. When they need a 3 point shot they usually run this action in which a big receives a pass, flips it back to the guard right away and then receives a flare screen for a look from 3. I like the options this set offers in which the guard who receives the flip back can attack right away, this can draw the big man’s defender in, and then look to hit the big off the flare for an open shot. This set is designed to get misdirection action before a flare screen for Jae Crowder. Both bigs at the elbows, one receives the pass and Crowder looks to screen away for the point guard. This is misdirection action and is looking to freeze his defender before flaring off a screen from the opposite big to get an open shot.

When Brad Stevens thinks his player has the advantage offensively, he will run this set to get a brush screen or a player cutting before a hard drive to the rim. The player he likes to handle the ball is typically strong and has a good chance at beating his man off the dribble.

Designed to again get the player attacking to their strong hand, this set off the “AI-Iverson Cut” has options for players to attack off of. The first option is for the player to score and attack the rim, the second is if the defense collapses then look to kick to the big cutting off the hammer screen and finally a throwback set to get misdirection into a guard coming off a throwback screen. For the throwback screen it is important if the team “ICES” the ballscreen and you have already attacked the rim off the Iverson cut, then this will open up this counter even more, making it look like you are attacking and then throw it back for an open look.