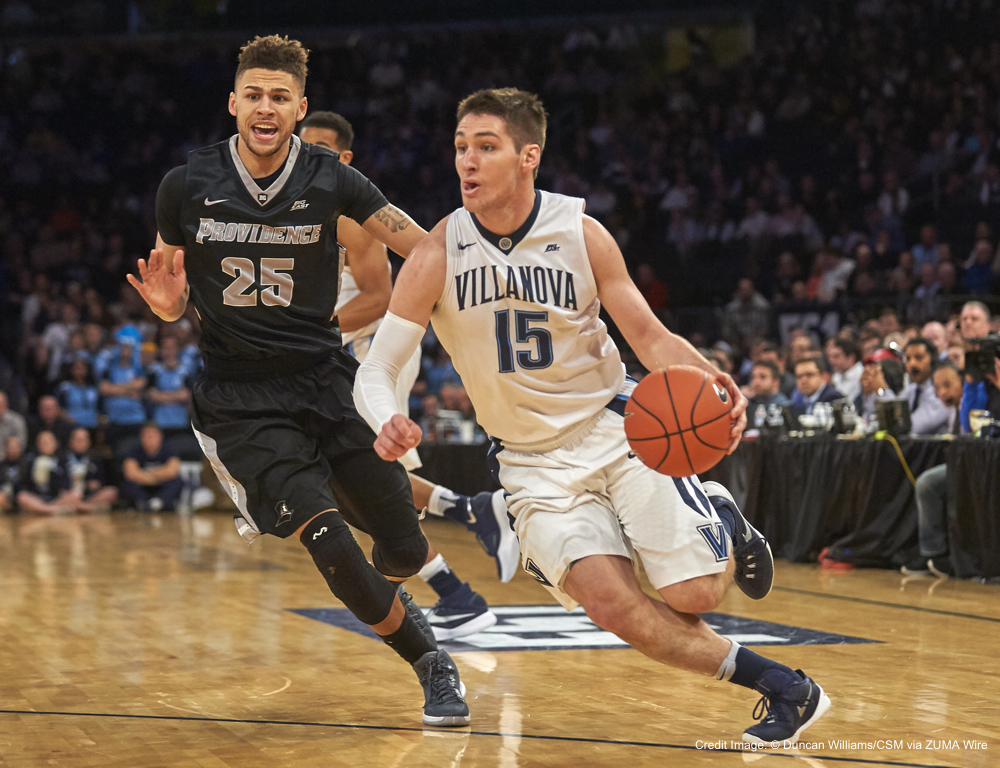 The Villanova Wildcats enter the NCAA Tournament as the #2 seed in the South Region behind the beautiful spacing and symmetry of their four-out ball screen motion offense.

The Villanova Wildcats (29-5, #2 South Region) have long been know for their immaculate spacing, ball movement and Jay Wright’s affinity for “small ball” and four-guard lineups.  The Wildcats’ offense ranks 11th in the nation in adjusted offensive efficiency and ‘Nova fans hope it can lead the team all the way to Houston.

The spacing and balance is easy to see. The Wildcats are almost always beautifully spaced creating a horizontal and vertical stretch of the defense.

There are simple rules for spacing and cuts that help Wright’s offense maintain its floor balance throughout the possession. Let’s take a look at Villanova’s four-out motion concepts.

In the diagram below we see the basic setup of the Villanova offense. Wings fill the corners at about “block extended.”

The post can fill either of the post areas which Wright calls “primetime.” The remaining players fill the slots. As the ball moves, there are various rules for cuts based on where the ball is passed. For example, on any reversal pass from slot-to-slot there is an interchange with the player below you.  The top player runs on the inside to the corner and the wing fills hard to the top. If we follow the ball, more rules are made clear. On any pass from slot to wing there is a shallow cut through the “logo” away to the weakside. It is important for the cutter to stay shallow. Do not cut too deep and crowd the post player.

The other players fill to the ball to “square the top” and maintain spacing and floor balance. The ball can swing and reverse throughout the possession and the four perimeter players follow the rules of the offense:

The wide spacing and double gaps leave room for dribble penetration. Drives put the Wildcats into their “drive and space” rules.

On baseline penetration there is always a “drift” player in the opposite corner. There is also a fill behind the drive and a player centered up at the top of the circle.

The low post makes a “logo cut” inviting their defender to help on the drive and countering with the cut to the logo even with the front of the rim. Below are diagrams of other drive and space adjustments. Aside from the ball movement and player movement generated from passes, cutting rules and dribble penetration, Villanova uses ball screens to puncture the defense. The “bigs” set ball screens in the slot and on the wings for the guards throughout the offense.

Often the low post player will sprint out of the block and follow the ball reversal and set an inside high ball screen for a guard in the slot.

First the guard makes the pass ahead to the wing and, by rule, shallow cuts through the logo to the weakside. The other players fill to the ball and square the top. If the wing (3) does not enter the post, the ball reverses. On the slot-to-slot pass there is, by rule, an interchange. Often you will see the Villanova bigs, Daniel Ochefu or Darryl Reynolds, follow the ball into the the inside slot ball screen. This concept is featured in the video below. Ryan Arcidiacono initiates the offense with the pass from slot to wing thus triggering the shallow cut away. His teammates fill to the ball to square the top.

Josh Hart reverses the ball and interchanges with the player below him. On that catch the low post sprints into the high inside ball screen. The roll prompt the wing defender to “tag the roll man” and Arcidiacono rises out of the corner and makes the defense pay.

In the late clock situation below, Villanova demonstrates the rules of the four-out motion again. This time the cuts and movements by the perimeter players occupy the help and make for an easy one-on-one inside for Ochefu.

Wright and Villanova fans are hoping the Wildcats can space and spread their way back to their first Final Four since 2009. The four-out attack was potent then and is potent now due to these simple principles.