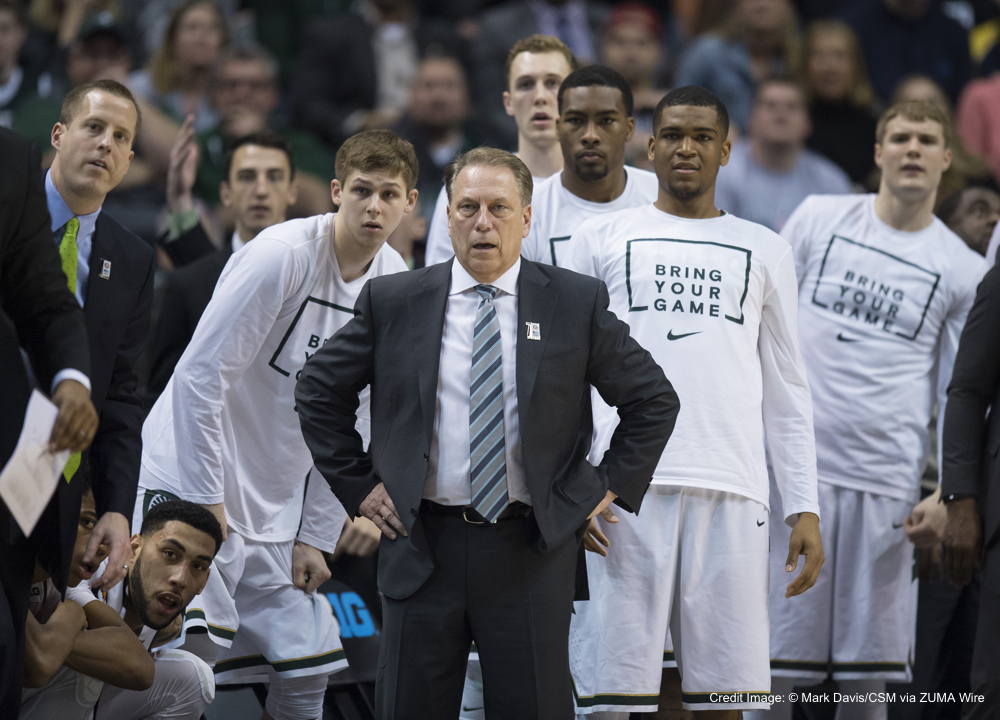 The Midwest region is loaded with some great #XsOs and great coaches. Michigan State, Virginia, and Iowa State are all top 10 efficient offenses, and add Purdue, Gonzaga, Butler, Utah & Texas Tech and you have half of the teams in the top 30 in half court efficiency (KenPom Rankings). The fascinating part is that every team plays different styles, Virginia and their deliberate Mover-Blocker offense or Michigan State’s early attack, each team attacks differently.

Virginia uses their Mover Blocker motion offense to create opportunities to score out of multiple options. Flare screens, down screens, baseline turnout opportunities all turn into an option for 2-man game easily, as well as post ups and ballscreens.

Butler runs some great sets, with this being the most effective set they ran all year. After the guard receives the ball on the wing, the big fakes the ballscreen for him. Rejecting the ballscreen intentionally the guard drives to the rim, almost forcing help or getting to the rim uncontested. This is the “decoy” or fake action, then the two bigs set a stagger screen for the shooter looking to throw it back to him. The reason this set works really well is because the player you look for a shot, his man is in help position so it holds him or forces him to make the decision to leave the shooter or stay near the rim.

This set is one of the best sets I have seen from the 2015-16 NCAA season. It has so many layers and options to it and is forcing the defense to guard for the entire possession. It has screen the screener action, double cross screen into roll and replace action, into a high low opportunity and then when the defense collapses to help on the post, double stagger for a guard to get a shot. Iowa State likes to often get into their offense after weave action between guards up high. After the weave, both bigs flash to the elbows creating Horns formation. Niang sets a ballscreen and then receives a backscreen for a layup.

I could write several articles about how fantastic Tom Izzo and Michigan state are when it comes to X’s & O’s. One of his favorite sets is his “Chest” set that has multiple counters to it, this is the basic version.

March 13, 2016 – Indianapolis, IN. U.S. – Michigan State Spartans head coach Tom Izzo and the Spartan bench watch as Purdue jumps out into the lead in the first half during the finals of the Big Ten Conference mens basketball tournament between Purdue and Michigan State at the Banker’s Life Fieldhouse in Indianapolis, IN…Michigan State 66, Purdue 62.Mark Davis/Cal Sport Media(Credit Image: © Mark Davis/CSM via ZUMA Wire)
Sharing
Authors