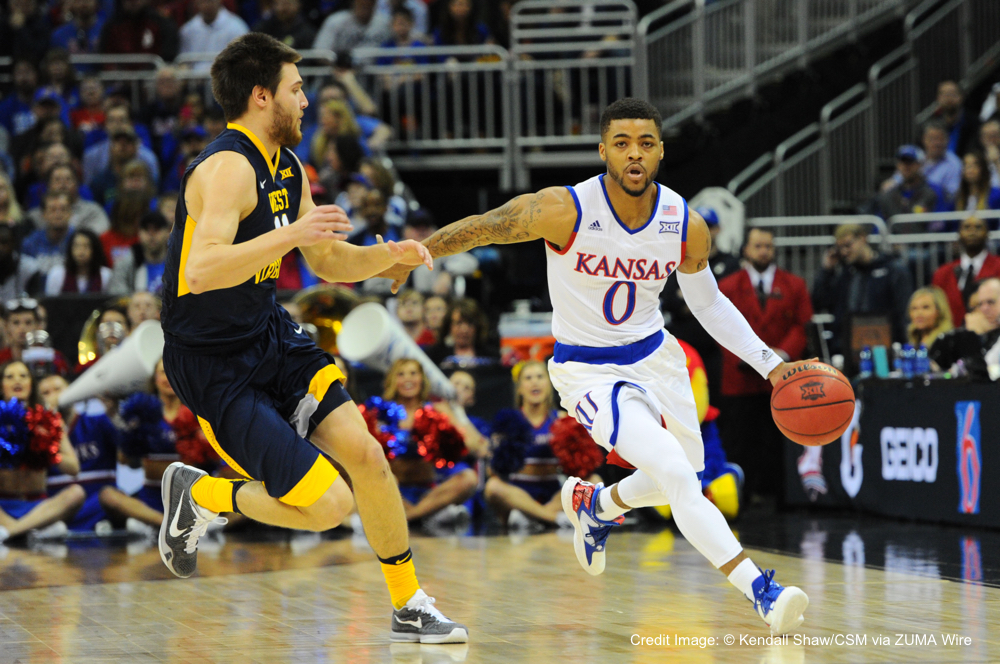 The South Region of the 2016 NCAA Tournament is packed with teams rich in tournament tradition, pro-level talent and some rich X’s and O’s.

#1 Kansas Jayhawks – Bill Self’s crew is the overall number one seed in the field – and deservedly so. The Jayhawks claimed an unfathomable 12th straight Big 12 regular season championship and captured the Big 12 Tournament crown.

Kansas features veteran players such as Perry Ellis, Wayne Selden and Frank Mason plus a coach who knows what it takes to claim the title.

Self has long been know for his high-low motion offense and the Jayhawks use it as their main offensive engine.

The high-low can be run with either a strongside cut or weakside cut option. With either option, it is an “inside-out” offense where throwing over the top of the defense by using low post sealing techniques is the goal.

#2 Villanova Wildcats – The Wildcats are fast becoming the “Kansas of the Big East” after Jay Wright’s program captured yet another Big East regular season title. But the regular season successes have not translated into tournament glory in recent years. Will this be the year the ‘Cats break their March slump?

If they do it will behind the beautiful spacing and symmetry of Wright’s four-out motion offense. In Villanova’s four-out they space shooters and slashers around big man Daniel Ochefu. Ochefu often sets inside ball screens for play-making guards. It is a simple but effective attack.

The ‘Canes feature a trio of veteran transfers – Angel Rodriguez,  Sheldon McClellan and Kamari Murphy – and an offense heavy on ball screens. Miami used the 2-3 high set in the video below to get into their offense against Virginia in ACC play. Check out the nifty option late in the video as well!

The basic action is diagrammed below. Click on image to get diagrams! Not many experts are talking about the Hurricanes as a Final Four contender, but this may be the veteran team that makes its way to Houston.

#4 California Golden Bears – What a cast of talent Cuonzo Martin has assembled in his short time in Berkeley! The Bears have the carefree swagger that can be a danger for a favorite to face. Cal has had its’ struggles away from home this season, but at times has looked unbeatable with their top-end athleticism.

(Thanks to Lucas Shapiro for the diagrams and video below.)

The design of the set used to open the game versus Oregon is quality. The right side of the floor is cleared out for the flare offering it lob potential if the cutter’s defender trails. The cutter coming off the stagger does a great job reading that his defender “shoots the gap” and out cuts the stagger to the wing.

Two Big Ten squads in the South Region have been very tough to figure this season. The #7 seed Iowa Hawkeyes enjoyed a mid-season stretch in which they climbed into the Top 5 and had the look of a #1 seed. But just like 2014-15, this team comes limping into March Madness.

The Hawkeyes are a motion offense team for the most part and are lead by a pair of brilliant cutters – Jarrod Uthoff and Peter Jok.

Can a team that owns a season sweep of Michigan State somehow regain its form and advance deeper into the South Region?

Like Iowa, Maryland has been an oddity. On paper the Terps seem to justify their preseason hype. But Melo Trimble suffered through a shooting slump and nagging injuries and the Terps cast of pro prospects has at times looked more like a collection of basketball players rather than a team.

Talent, size and depth favor the Terps, but maybe it is the intangibles that Maryland is missing. More than a few future pros will be on the floor if the Terps tangle with Cal in round two.

Give me the Temple Owls. The Owls were the number one seed in the American Athletic Conference and boast a lineup of players who you do not want to see in slug-it-out game.

Temple faces the reeling Iowa team squad mentioned above, then it may get a shot at crosstown rival Villanova in the second round.

Fran Dunphy’s Owls would like nothing more than to avenge a Big Five loss from earlier this year and prolong ‘Nova’s first weekend misery.

Kansas has to be the favorite, but it will not be an easy march to Houston. If you are into efficiency metrics, eight of the top 25 teams in the nation reside in the South Region.

The Jayhawks could face a red-hot UConn squad fresh off an AAC Tournament title, a talent-laden team of youngsters in California and/or any number of other capable squads. There can be no letdowns for the Jayhawks or any other favorite. This is March.