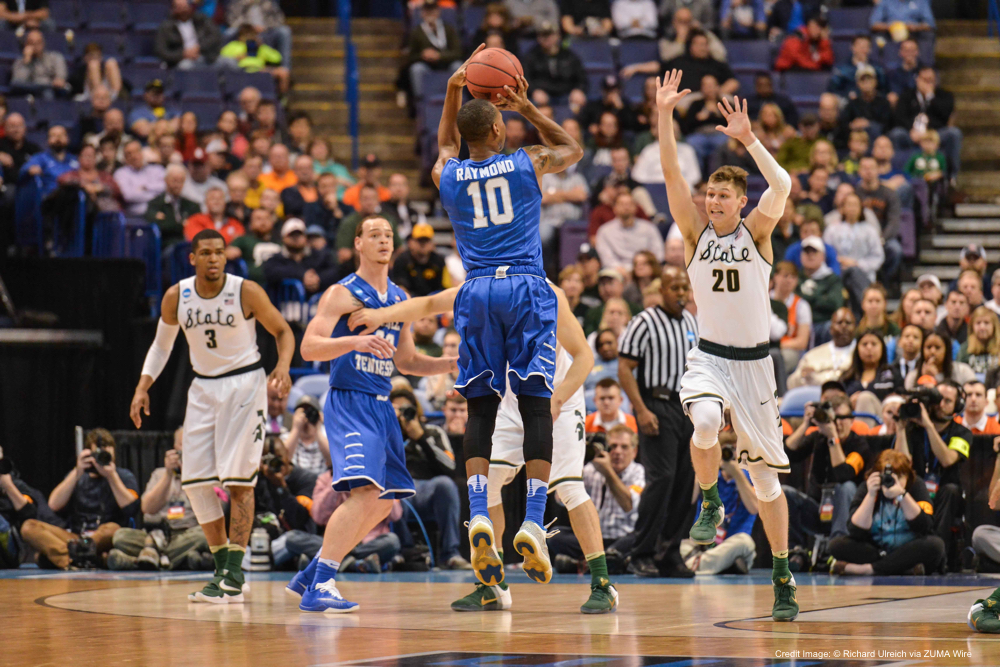 Offensive Key: Middle Tennessee’s fantastic spacing and their bigs ability to step out and hit the 3 really gave Michigan State fits on defense. Both Middle Tennessee’s big men hit several 3’s and they were able to run a lot of their sets designed to take advantage of slower Michigan State bigs with the bigs picking and popping out instead of rolling. The ballscreen motion they used was very good, and it is the action they run behind their sets. Good offensive teams always run something behind what they run, for teams like Kansas it is High-Low action, and for Middle Tennessee State it was a lethal ballscreen motion that is hard to guard. This is not anything new, this ballscreen motion has been run quite often throughout the NBA/FIBA/NCAA but the main difference is Middle Tennessee’s ability to stretch and space the floor with essentially a 5-out offense at times.

This is what Middle Tennessee runs behind what they run. Any set that is run, or does not create a scoring chance typically flows right into this or they can get into this quickly with multiple scoring options off of it. When run all the way through you can have an option for a backdoor, dribble hand off, duck in off ball reversal, and then the triangle corner pick and roll action. Off of the ballscreen motion, after the initial ball reversal the guard who receives a dribble hand off has an option to score backdoor.

Middle Tennessee runs great chin action (backscreen into a ballscreen) and has numerous counters to it. If the defense sags off or goes under the backscreen for the guard then he can fade out to the 3 point line as the big turns the angle of the screen to allow a rescreen on his defender. Another option because of the bigs shooting ability is after the ballscreen the big man can pop out for a 3 point shot.

Utilizing the bigs ability to score and handle the ball, this Elbow set has worked well for Middle Tennessee State throughout the season. After passing to the elbow, guards cut off and look to get a hand off back to score.

A nice Horns set designed to get the second ballscreen big to pop and attack or shoot while the defense is hedging on the ballscreen.

Taken straight from the Fred Hoiberg pitch series, this is weave action on the wing into a quick catch and go for a big to attack. Follow Gibson Pyper on twitter @halfcourthoops and for more sets from the NCAA Tournament check out The Basketball Playbook.