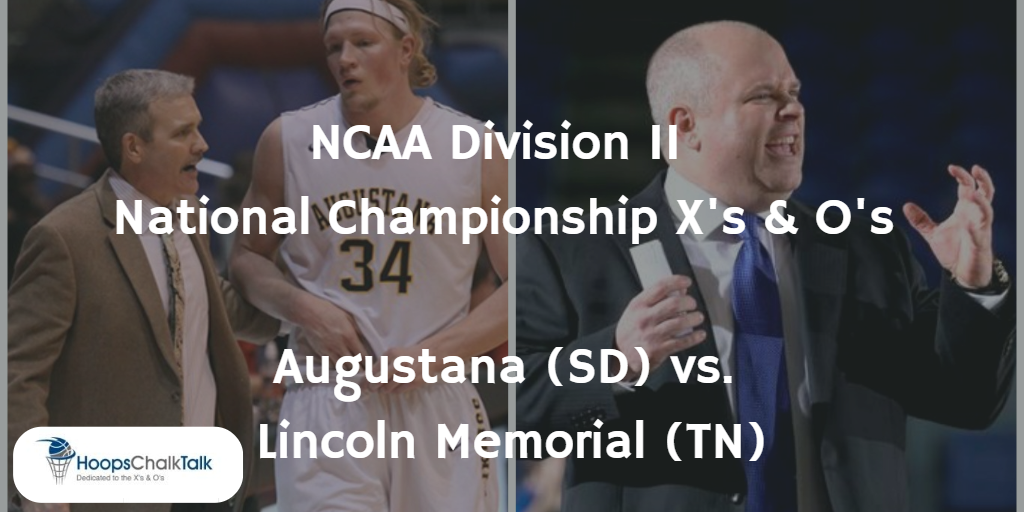 Augustana (Sioux Falls, SD) and Lincoln Memorial (Harrogate, TN) faced off in the NCAA Division II National Championship game on CBS on March 26th. The Vikings of Augustana held a five point lead at halftime, and were able to hold off the LMU Railsplitters to win the Division II National Championship by a score of 90-81. Augustana had three players score 20+ points (Alex Richter – 26, Dan Jansen – 25, and Casey Schilling – 20). Schilling also had 19 rebounds and 2 steals to add to his impressive stat line. For the Railsplitters, four players scored in double figures (Gerel Simmons – 21, Jalen Steele – 15, Emanuel Terry – 15, and Dorian Pinson – 13).

Both coaches have spectacular records and resumes. For Lincoln Memorial, Coach Josh Schertz led the team to a 34-3 record this season, bringing Schertz’s career record to 204-47. Since taking over in 2008-2009, when LMU had a 14-14 season, the Railsplitters have not had a season with more than 9 losses since.

Augustana is led by head coach Tom Billeter, who just completed his 13th season in Sioux Falls. In his 18 year career as a head coach, Billeter has won 344 games. Starting off with 3 straight losing seasons at Augustana (2003-2006), he has not had a losing season since and in the past two seasons he has a 65-5 record. The Vikings started the season winning an exhibition game against Iowa.

Both teams are incredibly efficient on offense, and we saw some great plays from both sides during the game. Here are a few of the best plays used by each team.

The Vikings have very skilled big men and do a great job getting the ball in the post. They do this in a variety of ways, but like to take advantage of the player’s passing skills with hi/lo plays.

Lincoln Memorial likes to get out in transition and score if possible. When forced into the half court, the Railsplitters likes to use handoffs and ball-screen to open up driving lanes. Included also is a nice elevator screen play called by Coach Schertz to get a shot on the wing.