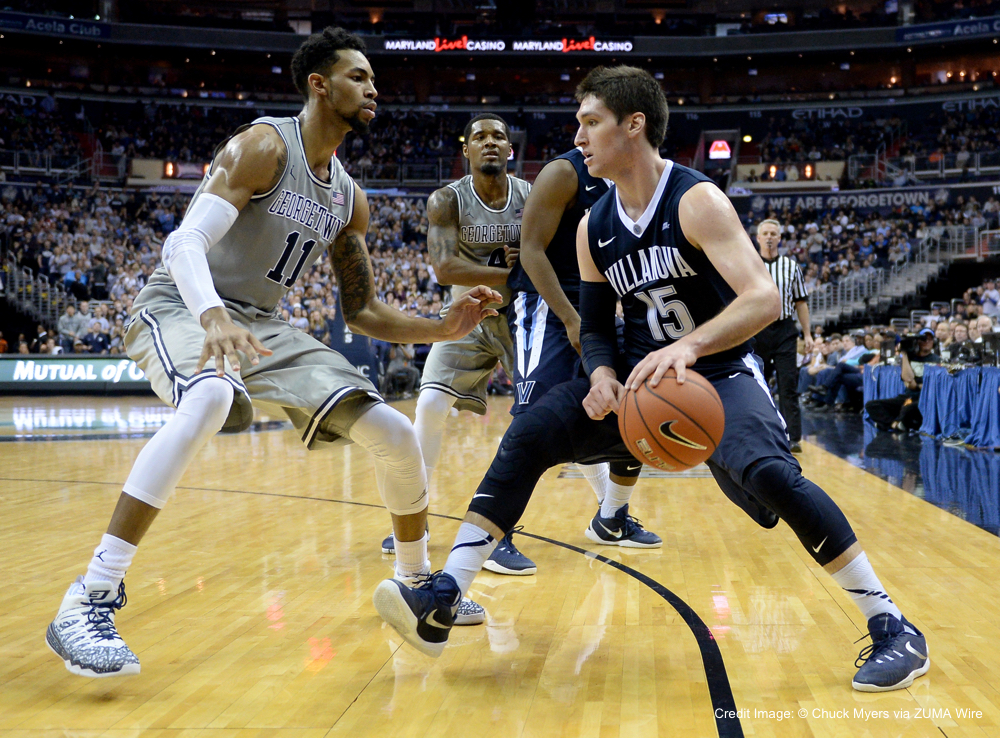 The Villanova Wildcats (33-5) survived the South Region to advance to Houston and will face the Oklahoma Sooners (29-7) in the Final Four. Jay Wright has his club in the National Semifinals for the first time since 2009.

The immaculate spacing of Villanova’s Four-Out Motion Offense coupled with a gritty defense has been the catalyst for this run. But the basic cuts and fills of the four-out are not the main engine of the offense. Ball screens are the scoring punch of the ‘Nova attack.

Wright does not have a thick playbook. He prefers instead to allow players to make reads off drives that are generated from shot fakes and ball screens. Whether a player drives off the catch or penetrates off ball screens, the same drive and space rules are in effect once the ball is driven into the paint.

Often the Wildcats get into ball screens from the movement generated by the rules of the four-out motion. There is a randomness to when and where the ball screens come but they can be broken down into four categories.

The DEUCE is perhaps the Wildcats’ most common ball screen. Often they get into their movement and the interior player makes his way to the slot to set an inside ball screen for a guard.

The ‘Cats often “get a deuce” in transition as well. The post trailing sets a drag screen with the ball in the slot.

The same 2×2 balance exists on either side of the DEUCE in transition as it does off the movement in half court. And anytime the two weakside players “see a deuce” they interchange.

The ROLL is set on the wing with the interior player who came to set the ball screen rolling to the basket. Ideally, the screener arrives just as the player who passed to the wing is cutting way per the motion rules.

With ball screen set low on the side of the floor and the slot player shading to the weakside of the midline, there is a double gap for a middle drive off the ball screen.

If the ball handler rejects and goes baseline, drive and space rules take over. Like the DEUCE, the ROLL is set off of the movement of the passing and cutting rules. The roll can be set on the second side or after a few ball reversals.

The FLAT ball screen is Villanova’s counter to pressure man defense. When an opponent extends their pick up point out to or beyond the halfcourt line, the big comes out and sets an automatic flat ball screen.

The philosophy is that if the defense wants to take the Wildcats out of their offense with extended man pressure, then Villanova will oblige by attacking the extra space that comes as a trade off.

The guard can attack either side of the flat ball screen looking to get to the rim. The top player on the “two-guard” side pushes below the free throw line extended and exchanges with the corner player.

The screener rolls and the guard on the single guard side makes himself available for the kickout should the ball handler not take it to the rim by either filling behind the drive or spotting in the corner. But ultimately, the FLAT is set for the guard to attack the paint. Like the other ball screen concepts, the ACE is set off the player and ball movement generated by the motion offense rules. The ACE differs from roll if the screener has shooting ability and pops instead of being a permanent “roll” man.

The driving player is looking to score off the ball screen. Weakside players exchange, then drive and space rules take over if the ball is driven into the lane. With the popping player, there is now a “throwback” option for a corner three.

Villanova is seeking its first National Championship since 1985 when the Wildcats were a Cinderella team who upset Georgetown with a near flawless effort in the final.

‘Nova is not a Cinderella in this affair, but the immaculate simplicity of the spacing-based spread four-out offense gives the Wildcats hope for another title.

Starting with Oklahoma, their opponents will feel the vertical and horizontal stretch the spacing and shooting ability of the ‘Cats applies. If the Sooners’ ball screen defense does not hold up, look for the Villanova Wildcats to attack.